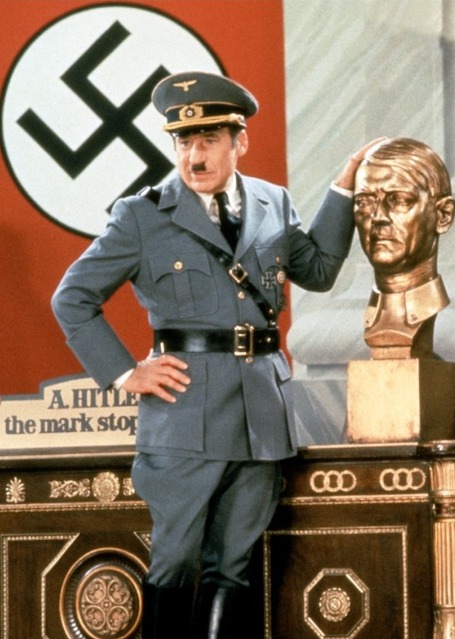 Polish actor Frederick Bronski (Mel Brooks) performs the role of a lifetime in director Alan Johnson’s 1983 comedy To Be or Not to Be.

Deference to a classic


Saving the world to save the theatre


On this day (February 27) in 1933 the Reichstag fire provided the humourless Adolf Hitler with his springboard to power. Fifty years later, tireless Hitler heckler Mel Brooks starred in director Alan Johnson’s 1983 homage to the classic anti-fascist comedy To Be or Not to Be.

TO BE OR NOT TO BE. Written by Thomas Meehan and Ronny Graham, based on an original screenplay by Edwin Justus Mayer. Music by John Morris. Directed by Alan Johnson. Running time: 108 minutes. Mature entertainment. NOT EVERYBODY LAUGHED. In 1942, New York Times film critic Bosley Crowther could find “no mirth" in Ernst Lubitsch’s screen comedy To Be or Not to Be.
The story of a theatre troupe matching wits with the Gestapo in Nazi-occupied Poland, it was attacked as "a callous, tasteless effort to find fun in the bombing of Warsaw." The fact that the film's star, Carole Lombard, died in a plane crash just prior to its release did nothing to sweeten the public response.
An outrage at the time, it has since come to be recognized as a masterpiece. A film that plays off light and dark passions, it is an almost perfectly pitched comic thriller.
Among the picture's most ardent fans is nostalgia merchant Mel Brooks. With such period parodies as 1974’s Blazing Saddles, Young Frankenstein (1974) and High Anxiety (1977) to his credit, it was only a matter of time before he got around to Lubitsch.
Surprise! The Brooksfilms production of To Be Or Not To Be is not a parody, but an homage. Here is a most deferential remake.
Brooks, of course, has the starring role. But, in what can only be a gesture of deep respect tor Jack Benny's classic performance, he does not play "that great, great Polish actor Joseph Tura."
Instead, he is Frederick Bronski, a name borrowed from the Tura troupe’s own Hitler impersonator, a character that was created by actor Tim Dugan in 1942.
Like good tailors, writers Thomas Meehan and Ronny Graham have adapted and altered Edwin Justus Mayer's original screenplay to fit the Brooksian temperament. This version recalls that certain minority groups received special attention from the Nazis.
Bronski, the actor-impresario, immediately recognizes this as a threat to his world. "Without Jews, fags and gypsies," he wails, "there is no theatre!"
The main plot continues to have Free Polish RAF Lt. Sobinski (Tim Matheson here; Robert Stack originally) parachuting into Warsaw to prevent the traitorous Prof. Siletski (Jose Ferrer; Stanley Ridges previously) from betraying the resistance movement to Gestapo Col. Ehrhardt (Charles Durning; Sig Ruman in 1942).
Because of his previous involvement with Bronski’s wife Anna (Anne Bancroft; Carole Lombard played Maria Tura), Sobinski turns to her for help. Naturally the entire theatre troupe becomes involved, and a series of devious ruses ensue.
Although debuting director Alan Johnson's picture lacks the timely tensions of the original, it maintains a pleasingly frantic pace. Assign the Lubitsch version a point value of 100, and the new To Be or Not to Be scores a very respectable 80.
*    *    *
Filmgoers with home video players don't have to wait for Lubitsch's To Be or Not to Be to turn up on the late, late show to make their own comparisons. This classic comedy is available on cassette and should be in the rental collection of any well-stocked video tape shop.

Afterword: Adolf Hitler was not known for his sense of humour. It’s hard to imagine the words Führer and funny in the same sentence. Nor is he an easy object of humour. The embodiment of evil in the 20th century, it’s not easy to joke about him. To this day, there are those who agree with Bosley Crowther that there is “no mirth” to be found in comedies such as To Be or Not to Be.
Among those who disagreed was Charlie Chaplin. He was at the height of his international fame when he went all in — as writer, producer, director, star and co-composer of the music — to make 1940’s The Great Dictator. Intended as a comedic condemnation of fascism, it is the story of Tomainian “Phooey” Adenoid Hynkel (Chaplin) and his fellow dictator Benzino Napaloni (Jack Oakie as a parody Benito Mussolini) who meet to plan the invasion of a neighbouring country.
The movie provoked controversy at the time because the U.S. was nominally neutral regarding the war in Europe. Chaplin intended his picture as a statement, one he reconsidered in his 1964 autobiography. “Had I known of the German concentration camps,” he wrote, “I could not have made The Great Dictator. I could not have made fun of the homicidal insanity of the Nazis.”
In a fascinating footnote to this comic history, Hollywood’s first slapstick Hitler was not Chaplin, but Moe Howard. He played Moronikan dictator Hailstone in a 1940 Three Stooges short called You Nazty Spy, released nine months before Chaplin’s feature.
Most persistent in his comic Hitler portrayals has been writer-director Mel Brooks, star of the To Be or Not to Be remake. In 1967, he gave us The Producers, a work of true satirical genius. In it, a scheming Broadway producer’s plan to make money off a guaranteed flop goes awry when play-within-a-play Springtime for Hitler (complete with singing/dancing stormtroopers) becomes a surprise hit. In 2001, Brooks turned his movie into a hit stage musical that became a new feature film in 2005.
Nor can we forget his 1981 sketch comedy History of the World, Part I. Although I didn’t mention it in my review, the film concluded with a “previews of coming attractions” segment that included the promise of a “Hitler on Ice” show. And, yes, we were shown a figureskating Führer. At the time, there were no plans for a Part II, so it really was just a joke. Then, last October (2021) it was announced that the Hulu TV streaming service had ordered eight episodes of History of the World, Part II from the tireless Brooks. Scheduled for broadcast this spring, it gives him a new venue from which to heckle his favourite target.