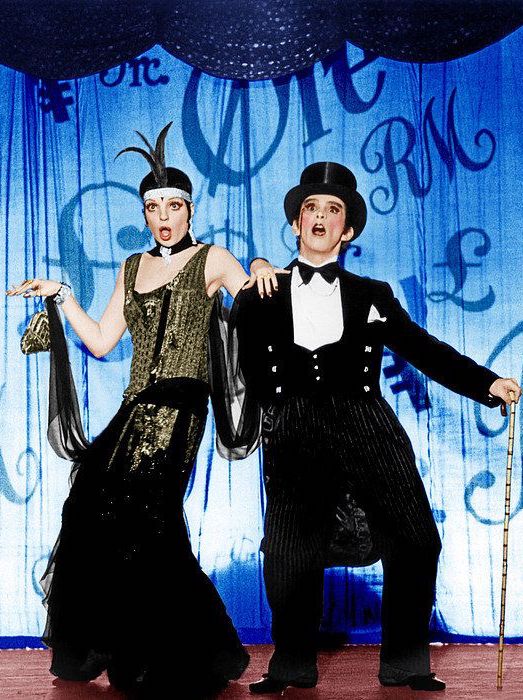 
Deciding to whom the future belongs


Though he achieved his greatest success singing and dancing on the Broadway stage, Joel Grey was no stranger to the movies. Born on this day (April 11) in 1932, he’s most often remembered as the welcoming Kit Kat Klub Host in director Bob Fosse’s 1972 musical satire Cabaret.

Wednesday, March 22, 1972
CABARET. Written by Jay Allen. Based on the stage musical written by Joe Masteroff. Music by Ralph Burns, with songs by John Kander and Fred Ebb. Directed by Bob Fosse. Running time: 124 minutes. Rated Mature. SALLY BOWLES, A MEMBER of the troupe in Berlin's Kit Kat Klub, has just finished her opening number. She slips into the audience to join her new boyfriend, an Englishman who has never seen her perform before.
"You know," he says with awed understatement, "you're really very good."
Good? She's bloody marvellous. Sally, as played by Liza Minnelli, is a raucous, raunchy show-stopper, an ugly duckling who is transformed under a spotlight into a captivating and carefully controlled bundle of erotic energy.
Her unbeautiful face, with its excesses of eye, nose and mouth, becomes intensely fascinating. Her timing is flawless, her every movement perfect. Liza has got it all together.
But only on stage. Off stage she plays her part as if the film were named Pookie in Purgatory. Or, perhaps, The Sterile Cuckoo Meets the Damned.
Cabaret is set in Berlin during the pre-Hitler 1930s. For Sally Bowles of Christopher Isherwood's The Berlin Stories, Weimar Germany was a place of divine decadence, a place where a talented 19-year-old could find fame, fortune and a career in the movies.
Mainly, though, it was a place where one could pursue pleasure without any inhibitions.
Her world is bounded by the footlights. It includes her English boyfriend, Brian Roberts (Michael York), a graduate student whom she takes almost forcefully as her lover, and her German boyfriend, the Baron Maximilian von Heune (Helmut Griem, whom film fans will remember as the sinister cousin Aschenbach in Visconti's The Damned). Max takes them both as lovers.
Politics play no part in Sally's world, but it is the politics of the period that fascinates director Bob Fosse. Like Luchino Visconti, whose 1969 film viewed the rise of Nazism as tragic opera, Fosse thinks in musical comedy terms.
His film begins and ends on the stage of the Kit Kat Klub, the fey, fashionable cabaret of the title. Its lipsticked and rouged Host (Joel Grey, reprising his Broadway role) bids the audience a trilingual Willkommen-Bienvenue-Welcome. Throughout the film, Fosse's cameras find their way back to the club to catch an act, with its inevitable comment on the action.
His satire is a sinister and forbidding mood piece, deriving much of its power from hindsight. Within the cabaret his camera pauses frequently on a vacant face or a pair of unseeing eyes. Later he introduces a counterpoint. At a sunlit rural beer garden, where Max and Brian have stopped for a drink, a young man begins to sing what sounds like a hymn.
The camera pans down, past his choirboy features to reveal his Hitler Youth uniform. His song is called “Tomorrow Belongs to Me,” and before he's finished most of his audience is lustily singing along. As he raised his arm in a determined Nazi salute, the temperature in the Ridge Theatre seemed to drop 30 degrees [fahrenheit].
It rose again for Liza, for the film is at the same time a showcase for her considerable talents as a singer and dancer. It derives most of its energy from her, and she was completely delightful in numbers as different as ballads and comedy routines.
Her Sally might be a kookie Pookie, but her stage presence alone is worth a trip to the Cabaret.

Afterword: Fifty years along, those Pookie references are probably a little obscure. At the time, newspaper readers knew that Judy Garland's daughter Liza Minnelli had broken out as a feature film star three years earlier in director Alan J. Pakula’s comedy-drama The Sterile Cuckoo (1969). Her character, Mary Ann “Pookie” Adams, was a sexually aggressive college coed who drove her serious student boyfriend to distraction. The Damned, was, of course, Luchino Visconti's 1969 tale of a wealthy German family gathered for dinner on the night Berlin's Reichstag burned. Minnelli earned her first Academy Award Best Actress nomination for playing Pookie. She won the Oscar for her portrayal of Sally Bowles.
For Joel Grey, the Master of Ceremonies of the Kit Kat Klub remains his best-known role. He originated the part in director Hal Prince’s 1966 Broadway production, winning a Tony Award for his work. Reprising the role in Bob Fosse’s 1972 movie adaptation, he added an Oscar to his trophy shelf. It’s been noted that among the works that inspired Cabaret was 1951’s I Am a Camera,  a stage drama also adapted from Christopher Isherwood’s The Berlin Stories. In what appears to be mere coincidence, Grey became serious about photography around 2001, publishing Pictures I Had to Take in 2003. To date, he’s added three more picture books to his resumé. His list of screen credits also continues to grow, most recently to include a cameo appearance in director Lin-Manuel Miranda’s 2021 musical Tick, Tick. . . Boom!  An inspiration to us all, Joel Grey is in Times Square today (April 11) for a celebration of his 90th birthday.