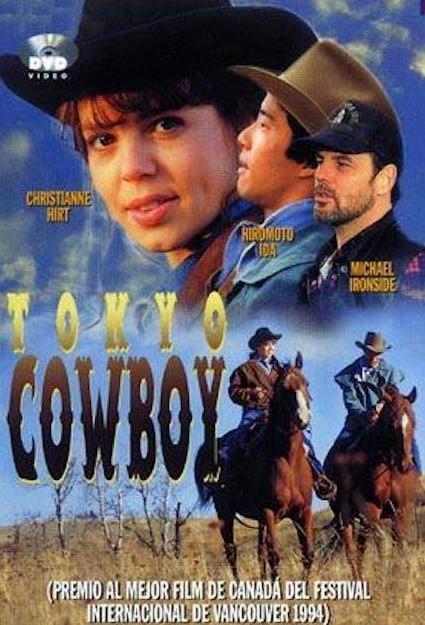 TOKYO COWBOY. Written by Caroline Adderson. Music by Ari Wise. Directed by Kathy Garneau. Running time: 94 minutes. Rated Mature with the B.C. Classifier’s warning "occasional suggestive language." THEY'LL REMEMBER THE STRANGER.
They'll talk about the day he rode into town, a man of the West from the Far East come to do what he had to do. He was the man whose name was No.
No kidding. A charming naif with a mildly mad dream of frontier fame, Japanese fast-food worker No Ogawa (Hiromoto Ida) decides that if he's going to be westernized, he'll go the distance and be Western-ized.
Well, maybe just a little kidding. No's story, told in director Kathy Garneau's playful Tokyo Cowboy, is a romantic comedy that has a lot of fun with ideas of reality, identity and audience expectations.
A young man steeped in Western movie lore, No concludes that flipping burgers is working at the wrong end of the cow. His American dream is riding the range with Canadian cowgirl Kate Beatty (Christianne Hirt), with whom he exchanged letters when they were both schoolchildren.
When he arrives on her doorstep, though, he discovers that this cowgirl has the blues. Kate, a small-town woman with urban ambitions, now is a professional artist involved in her own identity crisis.
She is living with Shelly (Janne Mortil), a local grade-school teacher who is both her muse and the love of her life. Among Kate's problems is her mom (Anna Ferguson), who has never picked up on the significance of two ladies sharing.
No, who is nothing if not flexible, incorporates the new reality into his dream. Balanced against Kate's coolness is Shelly's warmth and willingness to go riding with him.
Encouraged by Bill (Alec Willows), the local postman, No decides to court the schoolmarm. Bill, who's always wanted to be an Indian, becomes No's sensei and his Tonto.
Filmed in suburban Ioco, Merritt and on the sets built in Maple Ridge for the Bordertown television series, Tokyo Cowboy reflects a solid Pacific Rim sensibility. To their credit, neither first-time feature director Garneau nor screenwriter Caroline Adderson seems interested in doing low-budget reruns of cliché Hollywood material.
Together, they demonstrate the strength of working on the margins — the possibility of creating characters and situations that are not contained in the slickly commercial worldviews of a Katzenberg, Spielberg or Geffen.
Garneau shares No's dreams with us by means of movies within the movie. Constantly reinventing his vision, our hero sees himself within a black-and-white Western, his co-stars shifting with circumstances.
In the process, the director and her collaborators skilfully create a singular vision of their own. Full of fine little surprises, their Tokyo Cowboy is a charmingly offbeat entertainment.

Afterword: Those who saw it liked it. Tokyo Cowboy was screened at the 1994 Vancouver International Film Festival, where attendees voted it “most popular Canadian film.” Unfortunately, it appears not to have attracted the attention of a major distributor, and is not remembered as a commercial success. When, in the above review, I called it “a singular vision,” I didn’t know how appropriate that adjective would be.
I considered it singular because it reflected British Columbia’s growing recognition of its place on the Pacific Rim. While Québécois cinema drew upon the defiant experience of its “distinct society,” and Central Canadian movies were deferential to American cultural influences, West Coast filmmakers seemed to be coming to terms with a different reality, one that included Asia as part of our diverse worldview. Tokyo Cowboy deserves to be celebrated for doing that.
Although I failed to mention it at the time, the picture also was singular in that it had women in its top creative positions, a group that included Lodi Butler (producer), Caroline Adderson (writer) and Kathy Garneau (director). Their picture starred a trio of powerful  female performers (Christianne Hirt, Janne Mortil and Anna Ferguson). Sadly, for both Adderson and Garneau, Tokyo Cowboy remains their single feature-film credit.
As it turned out, both made different life choices. The Edmonton-born Adderson, a 1986 University of B.C. graduate, went on to become an award-winning novelist, heritage-housing advocate and arts educator. Married to Vancouver independent filmmaker Bruce Sweeney, she’s currently teaching creative writing at Simon Fraser University.  Surrey, B.C.-born Garneau, who earned a chemical engineering degree before taking film studies at UBC, has pursued a career as an energy consultant in Hamilton, Ontario. In 1998, she added co-founder of The Staircase, a theatre, cafe and multi-purpose arts venue to her resumé.
Christianne Hirt, who turns 54 today (March 20), was well-established as a Vancouver performer — see my review of 1989’s The First Season — when she starred in Tokyo Cowboy. She continues to work in films and TV. In 1993, she co-founded the Company of Rogues Actors’ Studio. Now known as Rogues West, it’s located in Vancouver, where she is currently teaching classes.