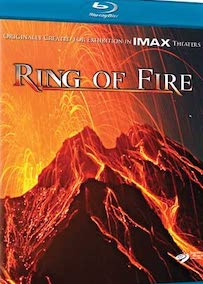 The violence of a volcanic eruption was emphasized on the cover of the 2011 dvd release of writer-director George Casey’s 1991 documentary Ring of Fire.


Bigger is not necessarily better


Chile’s Lonquimay Volcano has been known as Navidad since it erupted on this day (December 25) in 1988. It is among the hot spots on the Pacific Rim tour featured in writer-director George Casey’s 1991 IMAX documentary Ring of Fire


RING OF FIRE. Co-written by David Hamilton, Dr. Lawrence Blair and Sean Phillips. Music by Michael Stearns. Co-produced, co-written and directed by George Casey. Running time: 40 minutes. BIG IS A BIG responsibility.
"There have been about 70 movies made in IMAX," producer-director Greg MacGillivray said in a March 1990 interview. ''But really only about 20 of them are any good."
MacGillivray speaks from experience. One of the most prolific filmmakers working in the IMAX/Omnimax format, he's been turning out pictures for the big screen since 1976.
Big can be great. MacGillivray packed some sensational material into his most recent release, the outdoors adventure To the Limit (1990).
Since then, two of the all-time best IMAX epics have premiered here. Blue Planet and The Last Buffalo (both still on view locally) take what MacGillivray calls "participatory" cinema to new heights.
Big, unfortunately, is not always better. Ring of Fire, producer-director George Casey's volcanic grand tour, is disappointingly ordinary.
Footage obtained at great personal risk to the live-action photographers has been rendered inert by uninspired editing and a dull script. What we're offered is a natural science film in which the show is all but stolen by the computer animation, a spell-binding graphics display used to demonstrate the locations and inner workings of the Pacific Rim volcanoes.
Casey's idea is to show us a close-up look at creation in action. Highlights include the Christmas 1988 eruption of Chile's Lonquimay (since known as “Navidad”), a visit to the Mt. St. Helens lava dome, everyday life in the shadow of Japan's active Sakurajima, and lava flowing to the sea in Hawaii.
At first, it seemed as if IMAX was returning to its roots. In 1973, Toronto's Christopher (A Place to Stand) Chapman rushed to Iceland to record the Haimaey eruption. The result, a film called Volcano, was the first IMAX newsreel.
Grander in intent, Ring of Fire is actually less impressive than a well-wrought PBS special. Casey's picture conveys little sense of event or genuine immediacy.
Among its sequences is one recalling the October 1989 San Francisco earthquake, something that was done (and done better) in Blue Planet. The pronounced distortion of the downtown buildings (caused by the projection of a flat-screen image onto Science World's Omnimax dome) short-circuits the desired effect of urban awe.
Accelerated action shots are used to represent the pace of life in Japanese cities, an unoriginal gimmick that is just plain Mickey Mouse. That, combined with ''writer'' Lawrence Blair's fatuous "as-our-ship-sinks-slowly-in-the East" narration during Indonesian fire celebration scenes, made it clear that this is one picture that won't make make the big screen's greatest hits list.
Ring of Fire is currently [1991] on view at the Omnimax Theatre in Science World.

Afterword: Although there’s snow in today’s weather forecast, the memory of Chile’s Navidad — literally “Christmas” — reminds us that British Columbia took some serious heat in 2021. In late June, we experienced something called a “heat dome,” a weather event that resulted in record high temperatures (and an estimated 595 heat-related deaths). There were also wildfires, creating a series of disasters that made headlines around the world. Twenty weeks later, the focus was on the “Apocalyptic flooding” that followed the arrival of another climatic phenomenon, an “atmospheric river,” in our province. With no end to the COVID-19 pandemic in sight, we seem to be the target of a series of plagues of biblical proportions.
In the above review, I assumed that Province readers were familiar with the phrase “Ring of Fire.” Less colourfully known as the Circum-Pacific belt, it runs the 40,000 km (25,000 miles) along the west coasts of South and North America, across to Asia’s east coast and down to New Zealand. Dotted along the way are more than 450 volcanoes — 75 percent of Earth’s total — which makes it the planet’s most seismically active area. We have at least 18 volcanoes in B.C., with the closest to Vancouver being Mount Garibaldi, located at the head of Howe Sound, some 66 km (41 miles) to our north. Given the events of 2021, a pessimist might conclude that the New Year might include the rumble of tectonic plates and the glow of lava in the night sky. In the meantime, have a Merry Christmas.

See also: Not all fire mountains erupt alike. For a more positive view of the seismic slag, see my review of writer-director John Patrick Shanley’s quite wonderful 1990 fantasy Joe Versus the Volcano.