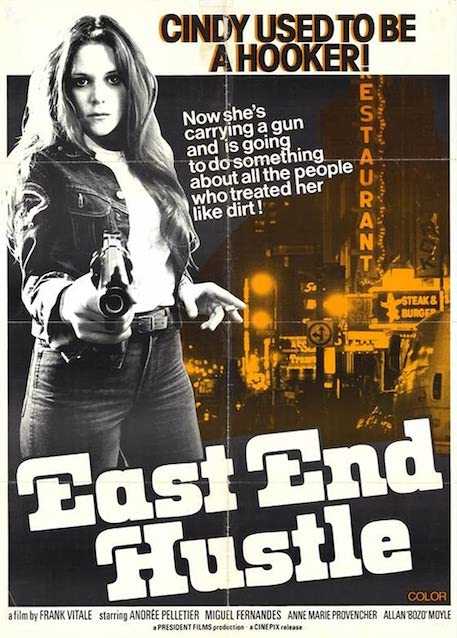 
Director wants to be taken seriously


A prominent politician’s daughter, Andrée Pelletier was never afraid to seize the moment. Born on this day (March 1) in 1950, she moved behind the camera (to write and direct) after establishing herself as an actress in films such as director Frank Vitale’s 1976 East End Hustle.

EAST END HUSTLE. Co-written by Allan Bozo Moyle. Music by Lenny Blum. Co-written, produced and directed by Frank Vitale. Running time: 91 minutes. Restricted entertainment with the B.C. Classifier's warning: nude sex and brutal violence. IT IS POSSIBLE TO take Frank Vitale seriously. It is possible to see the director's latest film, East End Hustle, as an uneasy marriage of Never On Sunday and Vivre Sa Vie, the work of a sensitive film artist that had to be roughed up and fleshed out to satisfy the crass demands of an insensitive marketplace.
Vitale's setting is the inner city world of the urban whore. As in Godard's 1962 film, his central character is a strong-willed woman with her own life to live. As in Dassin's 1959 movie, she leads a revolt among her sisters in the world's first service industry.
Here, though, the effect is neither cerebral nor particularly joyful. East End Montreal is shown to be a world in which pimps maintain discipline with leg-breaking lengths of lumber, drug overdoses and the garrote. Sex is a confused mixture of pain, pleasure, power and persecution.
Vitale opens his story with some kitchen-sink realism, a sure sign of either serious intent or lack of imagination on the part of the filmmaker. Marianne (Anne-Marie Provencher), oldest daughter in a large French-speaking family, is seen climbing out of bed, preparing breakfast for a houseful of younger brothers and sisters and then setting off to work in a textile factory.
A passive sort of girl, she keeps her job by granting sexual favours to her greasy-looking boss. Unbeknownst to her, he acts as a supplier to Dan Campbell (Miguel Fernandes), a prosperous pimp who is described as "an agent for the mob.”
Over Marianne's protest, she is shipped off to one of Campbell's cabaret-brothels. She gets as far as the gangster's car, only to be saved by Cindy (Andrée Pelletier), a former call girl who is determined to end Campbell's tyrannical hold over his women.
Now, this is interesting. Vitale, whose first feature was Montreal Main, a cold psychodrama set in a big city's homosexual community, here proposes to tell a story about hookers that not only has a female protagonist, but has all the earmarks of an action thriller.
His second theatrical feature, East End Hustle also reads like a feminist tract. Cindy speaks in slogans, and is concerned with such things as depersonalization and self-awareness. Her wardrobe (when she's wearing anything at all) consists exclusively of pant suits. She is introduced in a stylish leather number in shades of oxblood.
Cindy is a woman of action. She makes her own decisions and carries through. By contrast, her boyfriend Peter (Allan Bozo Moyle, the film's production manager and Vitale’s co-scripter), identified as a writer, is an ineffectual simp. At one point, the gangsters take him hostage to make Cindy reconsider her attack on their operations.
Is Vitale serious? One scene provides the definitive answer.
Cindy has succeeded in whisking away virtually all of Campbell's girls. Now, as they sit in their hideout, they reveal their real feelings about their lifestyle, their reactions to clients and attitudes towards sex.
Continued to some conclusion, this scene might have offered some honest and powerful insights into its subject. Vitale's camera quickly grows restless, though.
It follows Peter up two flights of stairs to a bedroom where Marianne sits, clad only in her panties. Peter instantly climbs out of his own jeans and the scene becomes sexploitation stock situation No. 27.
Too bad. Andrée Pelletier (first seen locally as the nature-loving Rita Sauvage in Gilles Carle's delightful wilderness comedy, Les Mâles) brings a great deal of fire and commitment to the role of Cindy. Unfortunately, Vitale's script continually shies away from the drama inherent in her situation to take in another rape, or one more beating.
It's possible to take East End Hustle seriously. Vitale's heart is probably in the right place. His directorial hand is what shows though, and it's busy scooping up exploitation dollars.

Afterword: East End Hustle was Andrée Pelletier's fourth feature, and her second starring role. The daughter of Prime Minister Pierre Trudeau’s then-secretary of state Gérard Pelletier, she made her acting debut in director Gilles Carle’s 1971 Les Mâles. That her barefoot-all-over performance in that picture excited no controversy at all in their home province was a sign of the maturity Québec cinema was modelling for the rest of the country.
A bilingual Montrealer, Pelletier was at ease in either official language, and on both sides of the camera. Her acting talent was recognized with five Canadian Film Award nominations. In 1979, she was first-time director Claude Gagnon’s cinematographer, filming his urban drama Keiko. In 1982, she shot Gagnon’s second feature, Larose, Pierrot et la Luce.
Pelletier made her debut as a screenwriter in 1985, contributing to the script of director Michael Rubbo’s family fantasy The Peanut Butter Solution. She demonstrated her social consciousness writing director Michel Brault’s 1990 drama Paper Wedding.
That same year, Pelletier made her directorial debut with Voodoo Dolls, a low-budget horror movie set in a New Orleans girls' school. In 1994, she followed up with a disappointing sci-fi feature, Anchor Zone. Better received was the French-language Blanche, an 11-episode TV series that she wrote for director Charles Binamé. Set in the 1930s, it tells the story of a young woman who pursues her ambition to become a doctor in a society not ready to accept female physicians. It was broadcast in 1993 on the Radio-Canada TV network.
Out of the public eye in recent years, Andrée Pelletier turns 72 today (March 1).