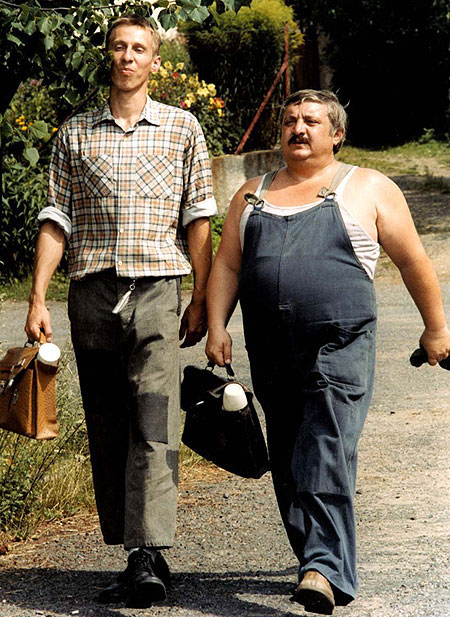 
Making the most of the mini-dramas


Born on this day (February 23) in 1938, writer-director Jiří Menzel saw his Czechoslovakia endure tumultuous times. The steady centre of its cinematic New Wave, he offered reassuringly humane, often comic visions of small town life in such features as 1985’s My Sweet Little Village.

MY SWEET LITTLE VILLAGE (Vesničko má středisková).Written by Zdeněk Hloch. Music by Jiří Brožek. Directed by Jiří Menzel. Running time:100 minutes. Mature entertainment with the B.C. Classifier’s warning: occasional suggestive scenes. In Czech with English subtitles. THANK YOU, MIKE GORBACHEV.
Filmgoers, too, are glad to see the end of the Cold War. No longer will we have to endure those tedious ideological critiques every time a sharp new movie arrives from central Europe.
(Nor will I miss the inevitable turgid prose about how this or that director dusted some bit of political commentary past the official censors; as if American filmmakers weren't constantly struggling with corporate bureaucracies about a whole range of issues related to profitability and mass marketing.)
We all know that an artist works with the materials at hand. If he's a jerk, then we get cinematic toxic waste like Pretty Woman, Darkman or Home Alone  [all 1990].
If he's a gentle genius like Czechoslovakia's Jiří Menzel, we can take delight in creations on the order of My Sweet Little Village (Vesničko má středisková).
Menzel, an Oscar winner in 1968 for his Closely Watched Trains, is in the best tradition of whimsical Czech skepticism. His idea of entertainment is to embrace small truths rather than play shill for large, loud lies.
Here, he examines the idea of community, and the accumulation of small, authentic moments that make life worth living.
He begins by introducing us to stocky, self-assured working man Karel Pávek (Marián Labuda). A driver at the Peace Co-operative Farm, Pávek is partnered with gangling Otik Rákosnik (János Bán), the guileless village simpleton.
Despite a sincere desire to please, Otik isn't what you'd call stimulating company. One summer morning, Otik, distracted by a curvaceous girl, guides their truck into a gatepost.
When word gets around — in a place as small as rural Křečovice, everything gets around — Pávek becomes the butt of the joke. Unable to see the joke himself, Pávek issues an ultimatum to farm management.
When the harvest is in, he wants a new partner. Thus is set in motion a series of events through which we are able to enter into the dynamics of the community, a place where lives are more than casually connected one to another.
In short order, we meet Dr. Skružný (Rudolf Hrušinský), the wise old country physician who depends on his people as much as they depend on him.
We learn that simple Otik's house is being used by farm personnel manager Kašpar Václav (Jan Hartl) for his trysts with farm secretary Jana (Libuše Šafránková), the luscious young wife of violently jealous driver Josef Turek (Petr Čepek).
Enriching the emotional mix is Pavek's son's infatuation with the attractive new schoolteacher, who's become involved with the itinerant artist currently boarding with Otick's aged, eagle-eyed mother.
Menzel weaves their stories together with uncommon warmth and humanity. In Křečovice, the rise and fall of political systems is less important than the new, shorter hemlines, and the fact (attested to by the doctor) that Czech women are the most beautiful in the world.
Menzel brings each of his mini-dramas to a simultaneous crisis point to make his point about how real worlds work. The result, My Sweet Little Village, is merry and life-affirming.

Afterword: I’m adding two Jiří Menzel pictures to the Reeling Back archive today. Click on the title Magicians of the Silver Screen to read my review of his 1978 tribute to the visionary craftsmen who founded the Czech film industry. Made seven years later, My Sweet Little Village was the second of his pictures nominated for a best foreign-language film Academy Award. (It lost to Dutch director Fons Rademaker's The Assault, the dark tale of a resistance fighter’s arrest during the Nazi occupation of Holland.) Minzel’s Oscar winner, 1967’s Closely Watched Trains (set during the Nazi occupation of Czechoslovakia), is often cited as the finest example of Czech cinema’s New Wave.
As I noted in the above review, politics often dominated the North American critical response to Eastern European movies. That was changing due to Glasnost, the cold-war thaw that occurred in the Gorbachev-era Soviet Union. It began a year after the 1985 release of My Sweet Village, and was into its fourth year when Menzel's picture reached Vancouver, and my review appeared. Back to the Future was the year’s box-office champion, and talk of New Waves was so old hat. It seemed as if everyone (except Canada) had had one.
Best known, of course was France’s La Nouvelle Vague (1958-1973), but new generations of filmmakers had significant post-Second World War creative moments in Japan (1956-76), Britain (1958-1963), Germany (1968-1982) and Australia (1971-1989). Czechoslovakia’s lasted from 1962-1968, and Minzel’s Closely Watched Trains is remembered as it finest example. Nor is its director forgotten.
As I noted in my review of Magicians of the Silver Screen, Menzel was the most significant New Wave director to not leave Czechoslovakia following the August,1968 “restoration of order” by Russian forces, otherwise known as the “Warsaw Pact Invasion.” His directorial career, begun in 1960, continued until 2013. His importance to film history was recognized by Indian documentarist Shivendra Singh Dungarpur, who travelled to Prague in 2010 to interview him. The result was 2018’s CzechMate: In Search of Jiří Menzel, a 430-minute examination of his central role in the seven-year New Wave.
Born in 1938, the year of the Munich Agreement and the subsequent collapse of the Czechoslovakian state, Menzel lived through its restoration in 1948, its years as a satellite of the U.S.S.R., the brief period of liberalization known as the “Prague Spring” (1968), 1989’s “Velvet Revolution,” and the 1993 split into the separate nations of Slovakia and the Czech Republic. Both are now members of the NATO military alliance which, thanks to a bellicose United States, is currently (February, 2022) involved in a game of chicken with a paranoid Russia over the future of Ukraine. We can only guess what he would make of the ongoing battle to control the media narrative. A humane chronicler of troubled times, Jiří Menzel died in Prague on September 5, 2020 at the age of 82.