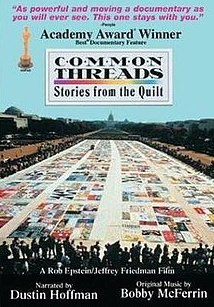 An image of the AIDS Memorial Quilt on display in Washington is featured on the theatrical release poster for the 1989 documentary Common Threads: Stories from the Quilt.


Film generates both anger and tears


An act of remembrance, the AIDS Memorial Quilt was first displayed on this day (October 11) in 1987, on the National Mall in Washington, D.C. Among the creative works that it inspired was 1989’s Oscar-winning feature documentary, Common Threads: Stories from the Quilt.

COMMON THREADS: STORIES FROM THE QUILT. Co-written by Cindy Ruskin. Music by Bobby McFerrin. Co-written and directed by Rob Epstein and Jeffery Friedman. Running time: 79 minutes. Rated Mature with the B.C. Classifiers warning "occasional coarse language." NOT ALL DOCUMENTARIES ARE created equal. With some subjects, a filmmaker knows from the beginning the form and direction his story will take. Such was the case with Common Threads: Stories from the Quilt, a picture that reaches into the immediate past to detail the progress of the AIDS epidemic.
Co-directors Rob (The Times of Harvey Milk) Epstein and Jeffery (Faces of the Enemy) Friedman are social campaigners with the ability to involve all of us in their moving, ultimately terrifying tale.
Common Threads, their [1989] Oscar-winning feature, is an elegy to acquired immune deficiency syndrome (AIDS) victims, set against the background of political denial characteristic of the Reagan years.
Its common thread is the grief suffered by surviving loved ones. Using interviews, snapshots, home movies and news footage, the film introduces us to five of the already dead, individuals commemorated in the AIDS Memorial Quilt.
The technique puts faces to the statistics. Dr. Tom Waddell, for example, was a U.S. Olympic competitor, and a founder of San Francisco's Gay Games. He is remembered by Sara Lewinstein, the mother of his much-loved child.
Suburban parents Suzi and David Madell recall their 11-year-old son David Jr., a hemophiliac who contracted the disease from contaminated blood. Sallie Perryman tells how her husband Robert managed to kick his drug habit only to discover that he was HIV-positive.
Adding to the tragedy is an absence of interest or compassion in the population at large. "It took Rock Hudson's death to capture America's attention," says narrator Dustin Hoffman. "By that time (October 1985), AIDS had already killed 15,000 other Americans."
Talented activists, Epstein and Friedman offer what pioneer documentarist John Grierson called "a creative treatment of reality." Effective and absorbing, their film generates both anger and tears.

Afterword: It’s worth remembering that before 1985 the hate merchants controlled the conversation around human immunodeficiency virus, the cause of acquired immunodeficiency syndrome (HIV/AIDS). In early 1982, the New York Times coined the term "gay-related immune deficiency" (GRID) for its coverage of this deadly new disease, one that that seemed specific to male homosexuals. Fundamentalist Christian preacher Jerry Falwell, an influential televangelist who had the ear of then-President Ronald Reagan, declared that “AIDS is the wrath of God against homosexuals,” adding that “it is God’s punishment for the society that tolerates homosexuals.”
The conversation shifted in favour of empathy when the American people began to attach names and faces to the growing number of dead. As noted in the above review, actor Rock Hudson’s death in October 1985 was a wake-up call. Some weeks later, during a candlelight march in San Francisco recalling the 1978 assassination of city supervisor Harvey Milk, AIDS activist Cleve Jones came up with the idea for the movement that created the Memorial Quilt. As it turned out, both stories were chronicled by the same documentary filmmaker, New Jersey-born Rob Epstein.
Released in 1984, director Epstein’s The Times of Harvey Milk told the story of San Francisco’s first openly gay supervisor, a community activist shot to death in his city hall office. Five years later, he completed Common Threads. Each picture won the feature documentary Oscar in its respective year, and both made significant contributions to the changing conversation. In 1995, Epstein and his directorial partner Jeffrey Friedman released their adaptation of gay film historian Vito Russo’s ground-breaking 1981 book, The Celluloid Closet: Homosexuality in the Movies. Some 30 years later, the world still has far too many haters but, thanks to truth-tellers such as Epstein, the popular culture pays them less mind.