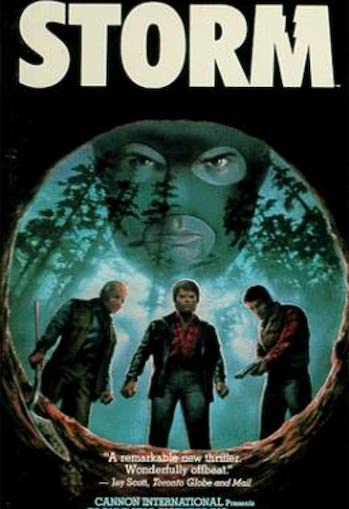 Plot lost in the woods


Calgary’s David Winning has enjoyed success satisfying the movie and television audience’s appetite for tales of both dark horror and sunny romance. Born on this day (May 8) in 1961, he made his feature film directorial debut with the 1987 wilderness thriller Storm.

STORM. Music by Amin Bhatia. Written, produced and directed by David Winning. Running time: 102 minutes. Rated Mature with the B.C. Classifier’s warning "some violence, occasional very coarse language, suggestive scenes."
LET'S SEE IF I'VE got this straight. In the winter of 1946, three guys named Jim, Burt and Stanley robbed a bank and took a clerk hostage.
Storm begins with them all sitting around a campfire deep in the forest. It's the middle of the night, and for no good reason the miscreants remove their masks and murder their prisoner.
Okay. Now it's 1984, and an aging Jim (Stan Kane) calls up elderly Burt (Harry Freedman) to arrange a trip into the bush to go after the loot. "We waited a long time.”
The scene shifts to the campus of Northwood College. Lowell Stein (David Palffy), a bespectacled nerd wearing a bow tie, is sitting out the dance in Pierson Hall, while his better-looking buddy Booker Lewis (Tom Schioler) is boogieing.
Booker is a master of a stalking game called Sniper, an assassination sport played with plastic dart guns. Lowell is his perennial victim. Together, they've planned a camping trip for the next day.
Am I going too fast? You haven't already figured out who they'll meet in the woods, have you?
After some dull dream sequences in which Lowell imagines himself alone in the forest, or running about in darkened college halls, they actually make it into the woods. There — surprise! — Lowell sees Jim bash Stanley (Stacy Christensen) over the head with a shovel.
Just when I thought they were getting down to it, just when the villains are supposed to chase the kids, Jim clutches at his heart. "We're moving too fast, Burt."
For Calgary filmmaker David Winning, Storm is a success story. His first feature, a $250,000-plus thriller made with the help of the Alberta Cultural Fund and the Canada Council, is now in commercial distribution.
Filmgoers will be less excited, because his picture manages to look like a Canadian government-funded first feature. Slow-moving and obvious, it recalls the "film boom" of the late 1970s, and all the anonymous exploitation films that it produced for the "international market.”
World-class, it's not. Though there is some mention of prison, Winning's screenplay never makes clear just why the three old buzzards left their loot in the wilderness or, having done so, why they've waited 38 years to go after it.
The Sniper game notwithstanding, neither Lowell nor Booker come alive as characters. As heroes, they are less interesting than the average Friday the 13th victim and deserve to be killed off for boring us so thoroughly.
Indeed, his bland and derivative picture really has no obvious audience. Short on sex and unimaginative in its violence, its major achievement really is the fact that it got made at all. Storm is a drive-in movie that never gets out of first gear.

Afterword: In 1986, Cannon Films made Calgary’s David Winning an offer few first-time directors could refuse. The U.S.-based company would distribute Winning’s prize-winning 81-minute Storm internationally if he’d add about 20 minutes to his picture, enough new footage to qualify as a Cannon feature film. And that’s why the film that reached Vancouver in early 1988 had a running time of 102 minutes. Though Winning’s bargain may have bordered on the Faustian, it did launch his eclectic career as a border-crossing picture maker.
In the above review, I made mention of the the Friday the 13th film franchise. Well, by pure coincidence, Winning went from his success with Storm to a job directing three episodes of the Toronto-based TV show Friday the 13th: The Series. He found his way to British Columbia soon after, shooting episodes of Neon Rider and Street Justice. Vancouver also provided the locations for his third and fifth feature films: 1996’s Profile for Murder and Exception to the Rule (1997). A quick glance at his directorial credits on the IMDb website  shows us someone who works hard, often in the U.S. as well as Canada.
A closer look suggests a man who would be as comfortable at a Janeite convention as at ComicCon. Yes, he’s recognized for helming multiple episodes of Are You Afraid of the Dark?, Earth: Final Conflict, Andromeda and Van Helsing. But, in a parallel universe, he directs sunny, happy-ending Hallmark TV movies, among them the 2016 Pride and Prejudice-inspired Unleashing Mr. Darcy and Sense, Sensibility & Snowmen (2019), both filmed in B.C.
A Hallmark stalwart, he has some 20 of the family-friendly channel’s titles on his resumé, including an impressive number of Christmas movies. Likely to be adding to the seasonal supply for years to come, David Winning turns 61 today (May 8).