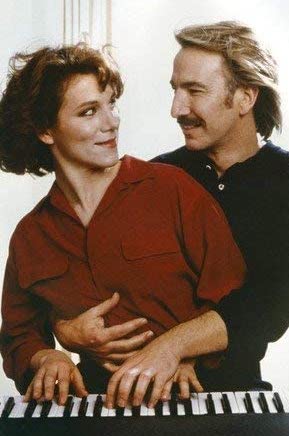 
British writer-director Anthony Minghella had the knack of blending the comic with the dramatic. Born on this day (January 6) in 1954, he demonstrated his talent in the 1990 supernatural romance Truly, Madly, Deeply

TRULY, MADLY, DEEPLY. Music by Barrington Pheloung. Written and directed by Anthony Minghella. Running time: 106 minutes. Rated Mature with no B.C. Classifier’s warning.
SHE'S DOING HER BEST.
Until now, Nina Mitchell (Juliet Stevenson) has been completely honest with Burge (Jenny Howe), her therapist. Today, though, it's more difficult than usual.
After all, how do you tell someone that you've seen a ghost?
Two years ago, Nina was Truly, Madly, Deeply in love with a professional cellist named Jamie (Alan Rickman). Then, suddenly, tragically, permanently, he died.
Today, she tries to back into the matter of his return. She mentions reading about how people in grief sometimes experience the actual, physical presence of the lost loved one.
British writer-director Anthony Minghella did his best.
By all accounts, he developed his post-mortem romance without any knowledge of a similarly-themed American film. A playwright with West End credits, Minghella offers filmgoers a distinctly different Ghost.
Set in the North London suburbs, Truly, Madly, Deeply is a picture that plays to British cinema strengths. Unlike last year's [1990] Manhattan melodrama, it is well written and superbly acted.
Essentially a teen fantasy, Jerry Zucker's Ghost paired male model Patrick Swayze with plastic doll Demi Moore. The limitations of the performers were underscored by a screenplay straining to be clever rather than literate.
No wonder that it needed a zillion dollars worth of special effects. No wonder Whoopi Goldberg stole the show.
As a writer, Minghella refuses to let formulaic plotting get in the way of his mystic realism. Introduced as a woman trying to deal with her grief, Nina is both troubled by the sound of an inner voice, and comforted by the feeling that she is being "looked after . . . watched over."
Nina's friends are concerned. She may be in failing mental health. Director Minghella firmly establishes the framework for a psychological thriller.
When Jamie does manifest himself, the mood shifts to one of almost comic relief. "Maybe I didn't die properly," he muses, "and that's why I can come back."
Despite her happiness, Nina still has a problem. How does she balance her relationships with the living and the dead?
How can she tell her friends that "I've got ghosts watching videos in my bedroom"?
A pair of performers who don't need technical trickery to breathe life into their characters, Stevenson and Rickman make of their dilemma a believable (if somewhat unusual) domestic problem.
They pick up the pieces of their interrupted affair, rediscovering the old passions, delights and, it must be said, tensions. (A classy couple, their taste in mood music runs to Bach rather than recycled 1950s film themes.)
A Ghost for grown-ups, Truly, Madly, Deeply demonstrates that  a romantic comedy can be both witty and intelligent.


The above is a restored version of a Province review by Michael Walsh originally published in 1991. For additional information on this archived material, please visit my FAQ. <http://reelingback.com/special/faq>

Afterword: Originally shot for BBC television, Truly, Madly, Deeply introduced writer-director Anthony Minghella to international audiences when its producers decided to release the film theatrically. His screenplay won 1992’s British Academy Award, and the New York Film Critics Circle honoured him as Best New Director. Hollywood was impressed, and his second feature was an American project that paired Matt Dillon and Annabella Sciorra in the 1993 romantic comedy Mr. Wonderful. Less of a success, it gave him some pause as he considered his next career move.
According to Guardian reporter Ronald Bergan, Minghella “sequestered himself for 18 months away from friends and family” while writing The English Patient. Filmed in Italy and Tunisia, it was released in late 1996. The Second World War romance collected 12 Academy Award nominations, among them recognition for the screenplay that he’d adapted from Canadian author Michael Ondaatje's 1992 Booker Prize-winning novel. It managed nine wins, including Best Picture, and a Best Director Oscar for Minghella.
Three more features followed — The Talented Mr. Ripley (1999), Cold Mountain (2003) and Breaking and Entering (2006) — before his untimely death at the age of 54 in March, 2008. The obituaries were unusually heartfelt, including Bergan’s piece in the Guardian: “Minghella, whose ample figure and cheery countenance exuded a love of life, seemed to be Harold Pinter, Orson Welles, David Lean and Richard Attenborough all rolled into one.”