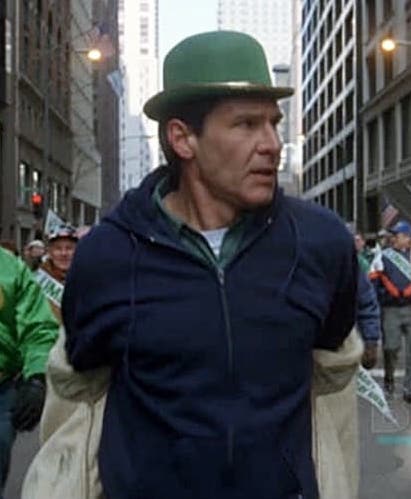 
Unlike Christmas, today’s celebration of St. Patrick (March 17) has inspired few feature films. The annual commemoration of Irish culture is best known as an occasion for parades, pub crawls and, not surprisingly, drunken revelry. Yes, there are Irish-themed movies to be viewed, but eliminate the ones focused on “the troubles,” adversity, betrayal, revenge, or homicidal leprechauns and you’re looking at a pretty short list. For me, the best St. Paddy’s Day pictures offer a cup of whimsy with a dash of magic. The recipe worked well for 1959’s Darby O’Gill and the Little People, the very model of Hollywood Irish fantasy. In it, Disney house director Robert Stevenson has Sean Connery appear to sing. Actual singing and dancing abound in the young Francis Ford Coppola’s 1968 adaptation of the stage musical Finian’s Rainbow, a tale involving the fabled pot of gold. Then there is writer-director John Sayles’s 1994 The Secret of Roan Inish, a Gaelic fantasy that manages to be magical without being cartoonish. There are other choices, of course. Just as 1988’s Die Hard has become a beloved Christmas movie, some film buffs keen on St. Patrick’s day have embraced director Andrew Davis’s 1993 adaptation of the mid-sixties television series about a man on the run, The Fugitive.

THE FUGITIVE. Written by Jeb Stuart and David Twohy. Based on The Fugitive (1963-1967), the ABC-TV series created by Roy Huggins. Music by James Newton Howard. Directed by Andrew Davis. Running time: 130 minutes. Rated 14 years limited admission with the B.C. Classifier’s warning: some violence and coarse language. ACTION? NOT SINCE THAT big boulder chased Indiana Jones from an ancient Peruvian tomb (in Steven Spielberg's Raiders of the Lost Ark) has actor Harrison Ford faced a more physically demanding role.
Anxiety? Not since Near Eastern terrorists kidnapped Dr. Richard Walker's wife (in Roman Polanski's Frantic) has a Ford role combined so much emotional intensity with immediate danger.
No mere rerun, director Andrew Davis's The Fugitive gives big-screen impact to one of the small screen's most fondly remembered suspense dramas. In the process, the Chicago-born filmmaker again demonstrates his personal touch within the bounds of superb popular entertainment.
An activist-artist, Davis knows the value of star power and name recognition. With the thoroughly professional Ford, he has the attention of the current generation of action filmgoers.
With The Fugitive, he taps into a previous generation's nostalgia for Tuesday nights at 10 p.m., an hour spent on the run with condemned wife-killer Dr. Richard Kimble (David Janssen) and his relentless pursuer, Lieut. Philip Gerard (Barry Morse).
Kimble was innocent, of course. The show's genius was that it retold a classic tale — it was Hugo's Les Miserables in modern dress — with the paranoid fervour of the mid-1960s.
Davis, a product of that era, grew up in the centre of the socio-political action. As a PBS reporter and apprentice to rebel cinematographer Haskell Wexler, he learned to question authority and tell stories in an effective, visual manner.
He paid his dues making B-budget adventures. Davis established his reputation directing martial arts actors Chuck Norris (Code of Silence) and Steven Seagal (Above the Law) in films that were more interesting and morally complex than their stars.
He broke through to the A-list four years ago [1989], directing Gene Hackman and Tommy Lee Jones in The Package. The timely theme of detente and the modern military establishment's resistance to change was at the heart of a top-drawer assassination thriller.
Last year's Under Siege reunited Davis with the talented Jones and the popular Seagal in a Die Hard-like tale of battleship hijacking. Again, the issue of a citizen's need to know what goofball, devious and ultimately dangerous things governments do in secret and in the name of national security was gently brought forward within the story.
Today's issue is health care. "Nine and a half billion dollars in net sales, last year alone," says Deputy U.S. Marshal Sam Gerard (Jones), reading a Devlin MacGregor Pharmaceuticals corporation brochure. "That company's a monster."
Oh, yes. There is action. A preview audience actually cheered following the incredible bus-train wreck scene that frees imprisoned Chicago surgeon Richard Kimble (Ford).
As on television, the Kimble character has been convicted of murdering his wife Helen (Sela Ward). As on TV, he claims that the real killer is a mysterious one-armed man. Here, though, there be monsters. Can the resourceful doctor figure out who they are, and why they kill?
Can he do it before the equally resourceful Gerard cuffs him with a triumphant cry? "Because it's the law, Jean Valjean!"
Action, anxiety, a first-class cast and just enough social relevance to give it a realistic sting, Davis's The Fugitive is one rerun that sets its own breathless pace.

Afterword: Director Andrew Davis’s timely take on the classic tale was both a critical and boxoffice success. Its seven Academy Award nominations included best picture, with Tommy Lee Jones taking home the best supporting actor Oscar. At the time, though, I can’t recall anyone making the case for The Fugitive as a St. Patrick’s Day picture.
A year ago today (March 17), pop culture commentator Olivia Rutigliano insisted just that in a posting to the CrimeReads website. She reminds us that the picture “sets one of its most dramatic chase sequences in and around Chicago’s Saint Patrick’s Day parade,”  and later asks “so HOW does Richard Kimble manage to vanish into it and leave a frustrated team of expert pursuers standing on tiptoe in his wake?
“My answer is simple: it is Saint Patrick’s Day, a magical day where, legend has it, snakes evidently materialize in places far outside their natural habitats, so they might be expelled from the land. Miracles can happen on Saint Patrick’s Day.” She elaborates on this argument, but the matter of miracles is at its core. And why not? Sean Connery’s beguiling rendition of “Pretty Irish Girl” in Darby O’Gill and the Little People has since been credited to a dubbing artist, Irish tenor Brendan O’Dowda. The diminutive stature of the picture's “Little People” was the result of special-effects photography. And don’t we all believe in movie magic?