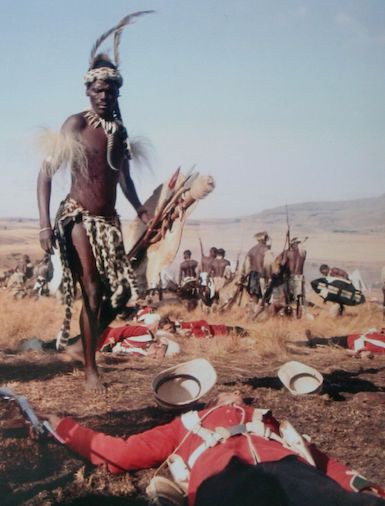 Fought in colonial Africa, the 1879 Battle of Isandlwana was not the best day for Britain’s Empire, an encounter remembered in director Douglas Hickox’s 1979 Zulu Dawn.


Churchillian flag-waving out of fashion


Politicians live in the moment. “I did not become the King’s First Minister in order to preside over the liquidation of the British Empire,” Winston Churchill proclaimed in November, 1942. That moment was three years into the Second World War, and his immediate concern was the survival of the United Kingdom in its battle with the Axis powers. Historians see the broader picture. As author of a six-volume chronicle of that event (The Second World War, 1948-1953), Churchill had to know that the cost of Britain’s victory was his deeding over the Anglo Empire to the United States, a process that began with the 1941 Lend-Lease agreement. Eighty years on, we are living through the mess that America has made of its imperial inheritance. As for Britain, the highlights of its decline have been fodder for a number of feature films, a trend that began in the mid-60s with writer-director Richard Lester’s 1967 black comedy How I Won the War and Tony Richardson’s scathing recreation of 1876’s The Charge of the Light Brigade (1968) on the Crimean Peninsula. It was just two years later, on this day (January 22) in 1879, that Her Majesty’s colonial forces suffered another galling defeat, this time in South Africa. That battle is remembered in director Douglas Hickox’s 1980 historical drama Zulu Dawn.

ZULU DAWN. Written by Cy Endfield and Anthony Storey. Music by Elmer Bernstein. Directed by Douglas Hickox. Running time: 117 minutes. Rated Mature with the B.C. Classifier's warning: some violent scenes.
LIKE IT OR NOT, the motion picture boxoffice tells us much about what moods are abroad in the land. Right now [1980] it's telling us that we’re fed up with feeling guilty.
How else to explain the massive lack of interest that movie audiences are showing towards Zulu Dawn, an epic re-examination of Britain's own battle of the Little Big Horn? The movie itself, though trimmed by 19 minutes for the North American market, is praiseworthy enough.
Its subject is the Battle of Isandlwana, fought on the afternoon of January 22, 1879. An end title card describes the outcome as the worst defeat ever suffered by a modern army at the hands of native forces.
The film opens with Sir Henry Bartle Frere (John Mills) informing the Zulu King Cetshwayo (Simon Sabela) that he must disarm his 30,000-man army. Cetshwayo, realizing that such a concession would only invite a British take-over, refuses.
Declaring a state of war to exist between Her Majesty's government and the native king, Frere orders an invasion force across the Buffalo River, the boundary between the crown colony of Natal and Zululand.
Serving under the sneering Lord Chelmsford (Peter O’Toole) are regular army colonels Hamilton-Brown (Nigel Davenport) and Crealock (Michael Jayston), Lt. Col. Pulleine (Denholm Elliott) and a contingent of black African cavalry commanded by Irish Colonel Durnford (Burt Lancaster).
Chelmsford is an imperious fool. Violating a basic rule of war, he divides his forces before determining the disposition of the enemy’s troops.
Cetshwayo, who wants a quick, decisive victory before withdrawing to take up the rather more important business of the seasonal harvest, takes immediate advantage of his opportunity and overwhelms the British base camp.
Attitudes change. Winston Churchill, in the fourth volume of his History of the English Speaking Peoples, lumps the Isandlwana Incident with the 1879 “massacre of the Legation staff at Kabul.” Churchill, who saw action in South Africa during the Boer War, calls them “minor disasters . . . promptly avenged."
Cy Endfield, who wrote and directed the 1964 feature Zulu (the story of the British stand at Rorke's Drift, a smaller battle that took place a few hours after Isandlwana), obviously meant Zulu Dawn as a cautionary tale.
Recognizing that Churchillian flag-waving was no longer in fashion, he slanted his tale to reflect a sense of enlightened liberal guilt.
Before the idea of empire was discredited, history was the story of our own civilization's progress. Post-war (both Second World and Vietnam) experience has taught us differently, and now our film artists tell us tragic tales, stories of men who were misguided and arrogant rather than dutiful and dedicated.
Under the direction of Douglas (Brannigan; Theatre of Blood) Hickox, Zulu Dawn has moments of fine acting, emotional power and visual beauty. For film music buffs, Elmer (The Magnificent Seven) Bernstein's soul-stirring score alone is worth the price of admission.
The trouble is that there are moments when people say things like "let us hope, gentlemen, that this is the final solution to the Zulu question." Though politicians, generals or kings might be villains, there's no denying the courage of the troops in the line — both lines — and the suggestion that their sacrifices were futile gives the film a mean, cynical edge.
Despite faultless production values, Zulu Dawn is a downer. For six weeks now, Vancouver audiences have shown that they'd rather watch a dedicatedly crazy killer (The Executioner) feeding street-dwelling human rats to cellar-dwelling slum rats than endure yet another defeat.

Afterword: Remembered as larger than life, Sir Winston Churchill has been portrayed in at least three dozen feature films, most notably director Richard Attenborough’s biographical Young Winston (1972) and Joe Wright’s 2017 wartime drama Darkest Hour. He had no doubt as to his legacy. "For my part, I consider that it will be found much better by all Parties to leave the past to history,” said Churchill just after the war, “especially as I propose to write that history.” His six-volume The Second World War (1948-53) and four-volume History of the English-Speaking Peoples (1956-58) offered his Anglocentric version of events. The Empire had morphed into the Commonwealth of Nations, and on maps in schoolrooms around the world pink ink indicated its presence on every continent.
Even so, films like Zulu Dawn came along to suggest new ways of thinking about past “glories.” The Battle of Isandlwana is included on The National Interest website’s list of “Great Britain’s Five Biggest Military Defeats.” In the above review, I said that Churchill mentioned it alongside the 1879 “massacre of the Legation staff at Kabul.” That took place midway through the second (of three) Anglo-Afghan wars, one of a series of central Asian disasters from which London’s Foreign Office learned little or nothing. Nor, in the 21st century, did the U.S. State Department.
And while we’re on the subject of British disasters, it was on this day (January 22) in 2020 that the House of Lords approved the Agreement of Withdrawal from the European Union. The Bill then received royal assent from the Queen, and Prime Minister Boris Johnson finally was able to proclaim his bungled Brexit a done deal. Today, it appears, the sun has truly set on the British Empire.

See also: Among the defeats suffered by the British was the 1885 loss of Sudan, the subject of director Basil Dearden’s 1966 feature Khartoum.