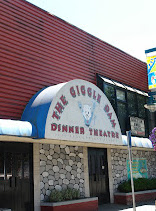 Honouring the tradition of the long-gone Surf, Port Coquitlam’s Giggle Dam Dinner Theatre offers a Naughty Nites Cabaret Show promising “sex and skin, clowns and fishnets, it's the burlesque show you can take your wife to!”


First one in is first to be squeezed out


Pioneering movie house manager Lew Young began a 20-month-long experiment programming adult films in his suburban B.C. cinema on this day (January 12) in 1970. The times were changing rapidly for film exhibitors, and for Young the story did not have a happy ending.

Tuesday, October 3, 1972.
LOCAL FILM HISTORIANS TAKE note. For Lew Young, independent operator of Port Coquitam’s Surf Theatre, the wheel has come full circle. The Surf, B.C.'s pioneer “sexexploitation” house, is giving up its policy of adults-only films, and will tonight [October 3, 1972] return to the Hollywood release format.
Young originally decided to try the so-called "skin flicks" when his theatre couldn't pay its way with family films. He’s returning to the more open policy for much the same reason.
The past few years have seen a lot of changes in Vancouver’s film community, and Young has been in the thick of it. A former circuit-theatre manager, he picked up the lease on Port Coquitlam’s old Column Theatre in 1968, thinking that the riverside community would be a good place to run a family-style theatre.
He renamed his place The Surf and set about refurbishing what had been a pretty run-down auditorium. At the same time, he says,  he was booking “what I thought were top quality family shows." In 18 months, he lost $1,500.
Young’s problems  were twofold. First, Port Coquitlam, a community of 1,500, wasn’t providing the patronage to support a 419-seat theatre. Second, The Surf wasn't able to book the newest films.
The booking problem is one faced by any independent operator with a theatre near a large urban area. Because he runs a single-screen cinema, he can’t compete with the major circuits for first-run attractions. Because he is close to the city, the distributors won’t release their product to him before they have cycled them through the circuit-owned suburban houses.
In January of 1970, Young took what he saw as the only way out. He began booking the kind of film that the circuits, conscious of their corporate images, wouldn’t touch: the sexploiters.
It was a breakthrough. And more than that, it was a moneymaker.
Today, just 20 months later, everybody's doing it. Both Famous Players and Odeon, not so image-conscious when there’s a good solid dollar to to be made, are tying up the product that used to be the Surf's staple. Cinepix, a Montreal-based distributor that was once very happy to have a single B.C. theatre booking its films, is now its own exhibtor, running the former Studio on Granville Street (now called the Eve).
For Young, it's become a matter of economics once more. A 40-minute drive up the Fraser, he pioneered a programming policy that now has flowed back down to Vancouver’s Theatre Row. And his little theatre can’t pay its way with adult films.
Young may be climbing back on the the same old treadmill, though. For his first new new-policy feature, he had booked The Godfather. The date was set for October 3, and was confirmed (a copy of the contract was mailed to him last week), so Young placed ads in three nearby weekly newspapers.
Thursday (September 28), Paramount Pictures local manager Chris Sullivan called Young to tell him that he couldn’t have The Godfather after all. According to Sullivan, it was “no longer available.”
It was too late to get the ads out of the weeklies, and so there may some embarrassment for Young at his box-office tonight. He hopes that a run of The Godfather may yet be forthcoming, but this evening the double bill will consist of The Sicilian Clan, a slick comedy about modern Mafiosi in Paris, and Something Big, a Dean Martin Western adventure.
Next week, The Surf will go back to weekends-only programming — the weeklong run was intended for The Godfather, a proven attraction — with big name double features. Of course Young still can’t get his pictures first-run, but he’s hoping that his new price policy will appeal to the surrounding community’s sense of economy.
His new advertising approach is “wait a bit, save a trip and save a buck a head.” Young is stocking up on pennies and quarters because, starting tonight, his general admission price will be $1.49.

The above is a restored version of a Province newsfeature by Michael Walsh originally published in 1972. For additional information on this archived material, please visit my FAQ.

Afterword: Lew Young first got in touch with me in 1970. The Pacific Press newspapers were shut down, and their striking unions were publishing their own paper, the Vancouver Express. As an independent entrepreneur taking his fate into his own hands, he had a good story, and I wrote it up in this feature story, that included a review of the Surf’s then-current feature, the 1962 “nudie cutie” The House on Bare Mountain.
The above story, published in the Province, took up his story in late 1972. As it turned out, his was a David and Goliath tale in which the giant won. It also offered an inside look at how one aspect of the film industry, theatrical exhibition, worked in the real world. Lew Young hoped that adapting the programming format of his single-screen suburban movie house to the changing times would save his business.
As it turned out, the threat to his livelihood was part of a larger trend, one that was bringing an end to the era of independent film exhibition. Multiplex movie houses and home video were on the horizon. Chain theatre operations devastated locally-owned neighbourhood cinemas in much the same way that agribusiness corporations destroyed the family farm.
In my Express feature, I noted that Young had staked his future on "the only product that the major chains wouldn't touch — the exploiters." The fact that there was an audience for "exploiters" was not lost on the majors, and Young's competitive advantage was short-lived. In the above story, I noted his final shot at the goal, a return to second-run picture programming. Sadly, The Surf Theatre closed permanently before the end of that year.
My snapshot feature included neither the beginning nor the end of the Port Coquitlam theatre site’s story. Recently, I discovered that its history is the subject of considerable interest among B.C.’s ghostbusters. According to the Vancouver Spooks Paranormal Investigations website, the Giggle Dam Dinner Theatre (the building’s current name) is “haunted.” Their extensive research begins with the 1948 construction of the Port Theatre, a movie house, at 2616 Shaughnessy Street.
Around 1963, the property was sold and the cinema shut down for a time. Eventually, it reopened as the Column Theatre. In 1968, it was leased to Lew Young, the subject of my 1972 feature story. Following its time as the Surf, the theatre apparently sat empty for several more years. Here the record becomes confused, with the VSPI timeline suggesting that it reopened on an unspecified date as a teen night club. In the early 1990s, a company called Port Coquitlam Cabaret Ltd. acquired the property and operated it under various names, including Rumours Club.
VSPI’s interest stems from the fact that on or about February 22, 1994, David Lowe, one of the club’s owners, killed his business partner on the premises, and buried the body in a nearby forest. (Lowe confessed to the murder in 2002, was tried and found guilty in 2004.) Before any of this came to light, the property was sold again, this time to reopen in 2001 as the Giggle Dam Dinner Theatre. In 2010, the theatre crew contacted VSPI, reporting “unexplained phenomena.” Investigations ensued.
Despite a 2011 declaration that the place was indeed haunted, the theatre company has carried on. Currently, it’s taking bookings for a new round of pandemic-safe performances set to begin on February 4.