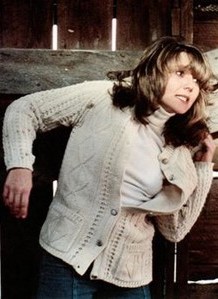 
Her choice is submission or survival


William Fruet may be best remembered as the writer and director of Wedding in White, Canada’s best film of 1972. Born on this day (January 1) in 1933, he followed that with the 1976 cult classic thriller Death Weekend.

DEATH WEEKEND [U.S. title: The House by the Lake] Music supervision by Ivan Reitman. Written and directed by William Fruet. Running time: 87 minutes. Restricted entertainment with the B.C. Classifier's warning: brutal violence and coarse language. DIRECTOR BILL FRUET SEEMS to be right on top of an international film trend. His latest picture Death Weekend was written to feature a woman, 36 year-old Brenda Vaccaro, in its starring role.
Fruet’s film was finished and in distribution when the trade paper Variety ran the headline “H’wood Skirts Male Star Demands" across the top of its front page. "Rewrite Pix Roles For Lower Priced Femmes."
The Variety story, datelined Hollywood, said that "sex switcheroos in castng are assuming the dimensions of a Hollywood trend providing more roles for women . . . In some cases, male actors are too expensive and it would appear that producers are casting femmes instead."
It went on to cite the case of Oscar winner Louise Fletcher, recently signed for an important part in The Heretic - Exorcist II. According to the article “her co-starring role with Richard Burton . . . originally was written for a man, and an awesome list of big name males was wooed before director John Boorman decided to offer to put a skirt on the part."
"Similarly,” it said, "the key character of Dr. McCartney in Arthur Hailey' s book The Money Changers was a man. But in Ross Hunter’s upcoming six-and-a-half-hour television film adaptation, the part is played by Helen Hayes.”
Fruet saw the problem from a Canadian perspective. If he had wrtten his picture around a male character, the best he could have hoped for by way of an American name actor was some non-starter — another Sam Waterston, perhaps — who needed a part just to stay off the unemployment line.
On the other hand, he could see that there were dozens of talented actresses, like Brenda Vaccaro, who had both names and ability, but for whom there were precious few feature film roles. Obviously the best way to get both a name and a decent performance was to hire a female.
Sadly, the casting of a heroine is the only real innovation in Death Weekend, a movie custom-tailored for smalltown yahoo audiences. Fruet's script assembles its plot from spare parts, coming up with yet another redneck vengeance thriller.
Vaccaro plays Diane, a self-reliant though rather naive fashion model. She's off for a weekend at the isolated country retreat of a rich young oral surgeon named Harry (Chuck Shamata).
She thinks she’s one guest among many. He thinks that she’ll be so knocked out by his palatial Tudor mansion that she’ll be a pushover.
The film opens with the couple roaring down a country road in his black Corvette Stingray. Diane is driving.
Enter the villains, a grubby quartet of half-drunk greasers led by Lep (Don Stroud). He' s behind the wheel of an overtuned red muscle car.
In an impromptu dirt-road challenge match, Diane manages to drive old Lep right off the road, injuring his pride and damn near wrecking his car. He vows to do a number of rude and nasty things to her.
It will come as no surprise to fans of this film genre to learn that Lep and his buddies do manage to track down Diane and Harry, that Harry proves to be a little bit kinky, and that baddies Frankie (Kyle Edwards), Stanley (Don Granberry) and Runt (Richard Ayres) run amok in Harry's finely furnished home.
What will surprise such fans (and perhaps turn them off), is the central position given to Diane in all of this. Virtually the only likeable character in the whole collection, she proves to be both intelligent and unimpressed by all the macho posturing. Given a choice between submission and survival, she decides to fight.
As a screenwriter, Fruet has pitched his story, not at the critics who acclaimed his debut feature Wedding in White, but at the rural drive-in audiences who make low-budget shoot-’em-ups like Walking Tall commercially successful. He tosses in all the ingredients: an auto chase, rube humour, rough talk, some flesh, lots of blood, rape, senseless violence, death and wanton destruction. The real fun stuff.
As a director he realizes that it ain't art. Nonetheless, considering  the totally exploitive nature of his material, he still manages to get better than average performances out of everyone in his cast.
Almost offensively simple-minded, Death Weekend sets out to be a cheap-shot shocker. It succeeds in being just that.
*    *    *
THE ENVELOPE, PLEASE: Producer Ivan Reitman is going to have to build a trophy shelf. Last year [1975], he entered his film Shivers (directed by David Cronenberg) in the Sitges International Festival of Fantasy and Horror Cinema. It came home with the Grand Prize.
This year, Reitman sent Death Weekend along to the Spanish event. Director Bill Fruet's movie managed to corral three prizes. Fruet himself won the best screenplay award, while Brenda Vaccaro picked up the best actress honour. The film as a whole received the festival's Critics’ Award.

Afterword: According to a comprehensive feature on the Canuxploitation! website, Death Weekend producer Ivan Reitman negotiated a deal with Hollywood’s American International Pictures (AIP) for the picture’s release in the U.S. Renamed The House by the Lake, it was paired with director Wes Craven’s infamous 1972 shocker The Last House on the Left, and promoted as an “all-female revenge double-bill.” From a long-term perspective, it had considerable influence within the horror genre.
My review, written without the benefit of the historic context, focused on an issue of more immediate interest at the time — women in the Hollywood workplace. For actress Brenda Vaccaro (who’d been nominated as best supporting actress for her performance in the 1975 potboiler Once Is Not Enough), it was a rare opportunity to have top billing and be at the centre of the action throughout. She’d made her breakthrough seven years earlier (with a showy supporting role in 1969's Best Picture winner Midnight Cowboy), but the big starring roles eluded her. Nevertheless, she persisted, and has worked constantly in film and television to this day. Most recently, Fruet fan Quentin Tarantino included a cameo appearance for her (as Mary Ellis Schwartz) in his 2019 historical farce Once Upon a Time in Hollywood. She currently has a recurring role, as Gloria Marquette, in HBO Max’s Sex and the City reboot And Just Like That.

See also: William Fruet’s 1972 debut feature Wedding in White was already the winner of the Canadian Film Awards Best Picture honour when he sat down with me in Vancouver for this 1973 interview.