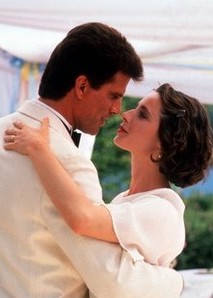 
Born on this day (December 29) in 1947, Ted Danson has been a performing presence for some 46 years now. During a 1988 working visit to Vancouver, he starred opposite Isabella Rossellini in director Joel Schumacher’s 1989 romantic comedy Cousins.

COUSINS. Written by Stephen Metcalfe. Based on Jean-Charles Tacchella's 1975 screenplay Cousin, Cousine. Music by Angelo Badalamenti. Directed by Joel Schumacher. Running time: 113 minutes. Rated Mature with the B.C. Classifier’s warning: occasional nudity, suggestive scenes and very coarse language. IT'S NOT THE SAME old story. Cousins Maria Hardy (Isabella Rossellini) and Larry Kozinski (Ted Danson) are determined not to have an affair.
They know that they're entitled to one. The day that Larry’s uncle Phil (George Coe) married Maria's widowed mother Edie Costello (Norma Aleandro), Tom Hardy (William Petersen) took Larry's wife Tish (Sean Young) for a short drive and some long parking.
They certainly find one another attractive. In the process, though, Larry and Maria have fallen in like. A mutual self-respect prevents them from doing more than a little conspicuous company-keeping, the better to unnerve the truly guilty parties.
"We're not having an affair,'' Maria finally tells the distraught Tish. "We're just playing a game to get back at you and Tom.”
Director Joel Schumacher now has two credits towards his M.A. — Master of Adaptation. His last film, the mesmerizing Lost Boys, was a brilliant, all-American reinterpretation of classic European vampire lore.
With Cousins, filmed in and around Vancouver last summer [1988], he brings a North American sensibility to the Continental marital infidelity farce. Based on the 1975 French-language comedy Cousin, Cousine, Schumacher's film improves upon its inspiration, offering filmgoers a well-wrought West Coast Moonstruck.
In the original version, writer-director Jean-Charles Tacchella showed us a society in which adultery is a way of life. His cousins were “wronged" so they have the "right" to their own passionate, defiantly public dalliance.
Recognizing that Tacchella's story just doesn't play in a late-1980s American setting, screenwriter Stephen Metcalfe adds attractive depth to the characters, and a responsible dimension to their tale. Unlike their impetuous mates, Larry and Maria resist the growing attraction they feel for one another.
“It’s so unfair," Maria confides to her cousin. "You've become my best friend.”
"Married men and women are only allowed to be close friends in large groups," Larry observes sadly.
Their hesitant, sweetly distant courtship plays itself out against a richly textured background of such groupings, as the Kozinski and the Costello clans come together for the ritual observance of weddings, funerals, garden parties and family dinners.
Their unintended romance gains intensity from the players' fine, reserved performances. While they're examining feelings, weighing options and considering consequences, director Schumacher holds our interest with some robustly engineered subplots.
Petersen and Young manage to be both colourful and to suggest the complexity of the sinning partners. Lloyd Bridges (as Larry's widowed father Vince) and Norma Aleandro (as Maria's twice-widowed mom) offer advice to their offspring, and begin their own energetic courtship.
The veteran Bridges also is involved in the picture’s best comic pairing. As the crusty granddad, he engages in snappy repartee with Larry's teenaged son Mitch (Keith Coogan), a personably kooky would-be artist.
Affectionate and funny, this is one  transatlantic translation that works a treat.

Afterword: What drew me to watch a recent TV comedy called The Good Place was Kristen Bell. The actress had won us over as Veronica Mars (2004-07), to say nothing of her star turn in the 2005 Vancouver-made Reefer Madness: The Movie Musical. Among the delights we discovered in Bell’s 2016-20 philosophical fantasy series was the veteran performer Ted Danson, cast in the role of an afterlife architect. It didn’t hurt that the genial demon’s name was Michael.
Before then, Danson hardly registered on my critical radar. I’d first noticed him in his second feature film, a flashy supporting role in Body Heat, the 1981 neo-noir utterly owned by Kathleen Turner. I completely missed his big breakthrough, playing bartender Sam Malone on the 11-season comedy Cheers (1982-1993), a show I've never, ever seen. I’ve only just learned that he earned his 16th, 17th, and 18th Primetime Emmy nominations for his work during the four seasons of The Good Place. Rereading the above review, I can see that he was just fine in Cousins, as he was in his other 1989 feature, director Gary David Goldberg’s Dad, in which he co-starred opposite Jack Lemmon. Currently, we’re enjoying his welcome presence in NBC-TV’s Mr. Mayor, an ensemble comedy set in Los Angeles in which he plays the title role.