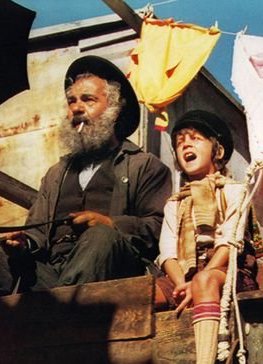 Through a brat’s eyes


An unmoving chronicle of childhood


A fighter for revolutionary change in Spain and China, Ted Allan eventually settled into a career as a poet, playwright and author. Born on this day (January 26) in 1916, he provided the screenplay for director Ján Kadár’s 1975 family drama Lies My Father Told Me.

LIES MY FATHER TOLD ME. Written by Ted Allan. Music by Sol Kaplan. Directed by Ján Kadár. Running time: 102 minutes. Mature entertainment with the B.C. Classifier's warning: occasional frank discussion of sex. CHILDHOOD. LOVE. DEATH.
These are the concerns at the heart of two new Canadian films currently [1975] on view in Vancouver. What's more, both director Murray Markowitz's Recommendation for Mercy and Ján Kadár's Lies My Father Told Me are based on true stories.
The focus in Budapest-born Kadár’s urban drama is on six-year-old David Herman (Jeffery Lynas), a kid who comes across as something of a brat.
Childhood, Montreal screenwriter Ted Allen suggests, is a time of larger-than-life impressions. Since his story is told from an obnoxious child’s point of view, this allows the director to populate the film with all the familiar stereotypes.
David’s father Harry (Len Birman), for example, is a materialistic hustler. His mother Annie (Marilyn Lightstone) is a saint-like beauty with a fine singing voice. Grandfather, the boy's beloved Zaida (Yossi Yadin), combines the more lovable qualities of Kris Kringle and God the Father.
Occasionally a detail intrudes, reminding us that the setting is 1920s Montreal. Then it's back to the story, with its nostalgia for a collection of characters, all of whom would look more comfortable in a quaint Eastern European village.
Despite its Canadian credentials, Kadár’s movie has the confined, aggressively modest look much in favour among foreign film artists. His direction of his actors suggests that he has little feeling for the sound of spoken English.
During the film, whiny little David experiences two crises. One is the mother-love-robbing birth of a younger brother. The other is the death of his Zaida.
In the world created by Kadár, a both events are curiously unmoving. The director manages to record emotional events without transmitting any of the feeling.
As a result, Lies My Father Told Me has the cold, insistent sensitivity of a coffee-house poet. Maybe I would have liked the movie more if the kid had been less of a brat.

Afterword: One critic’s ‘whiny little brat’ can be another’s ‘sensitive spirit of a new age’. My less-than-enthusiastic review notwithstanding, Montreal playwright Ted Allan’s feature screenwriting debut was a critical and financial success. Lies My Father Told Me won three Canadian Film Awards, including best picture, as well as the Golden Reel Award, created to honour the Canadian film with the year’s biggest box-office earnings. For Allan, the cherry on the cake was an Oscar nomination in the Original Screenplay category.
Born in 1916, Alan Herman (who wrote as Ted Allan) was part of a Montreal Jewish community that produced a generation of outstanding writers. Among them were Irving Layton (born 1912), Saul Bellow (1915), William (Why Rock the Boat?) Weintraub (1926), Mordecai (The Apprenticeship of Duddy Kratvitz) Richler (1931) and Leonard Cohen (1934). Shaped by the Great Depression, the adolescent Allan became a Young Communist, honing his writing skills as a reporter for the party’s local newspapers. At 21, he was off to Europe and service with Canada’s Mackenzie-Papineau Battalion in the Spanish Civil War. His first novel, 1939’s This Time a Better Earth, was based on his experiences there.
What he’s best remembered for, though, is his friendship with battlefield physician Dr. Norman Bethune. Allan served as his assistant in Spain and followed him to China, where Bethune's death made him a martyr to the revolutionary cause. In 1952, Allan published The Scapel, The Sword, the first English-language biography of the only Canadian eulogized by Mao Tse-Tung. The author was tireless in promoting it as a film idea, finally seeing it come to the screen in 1990 as Bethune: The Making of a Hero. Filmed on location in China, director Phil Borsos’s film was scripted by Allan, and starred Donald Sutherland in the title role. Its story included an Allan-like character, called Chester Rice, and the writer was among those interviewed for writer-director Bob McKeown's documentary feature Strangers in a Strange Land: The Adventures of a Film Crew in the Heart of China (1990).