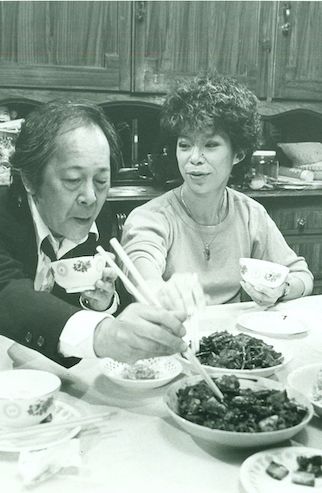 With tact and good taste


He’s best known as the cinema’s "poet laureate" of San Francisco Asian-American family, identity and food. Independent director Wayne Wang, born on this day (January 12) in 1949, staked out those interests in his 1985 Cantonese-language feature Dim Sum - A Little Bit of Heart

DIM SUM - A LITTLE BIT OF HEART. Written by Terrel Seltzer. Music by Todd Boekelheide. Co-produced and directed by Wayne Wang. Running time: 87 minutes. General entertainment with no B.C. Classifier’s warning. In English and Cantonese with English subtitles. MICHAEL CIMINO THOUGHT THAT he understood the Chinese. He'd heard about the importance of family, and he scrupulously studied traditional restaurant interior design before making his most recent film, the Chinatown drama Year of the Dragon (1985).
Cimino's painstaking efforts notwithstanding, Asian Americans turned thumbs down on his picture. A violence-filled street-gang epic, it has been accused of everything from promoting negative stereotypes to hardcore racism.
Wayne Wang is in no such danger. A Hong Kong-born San Francisco-based director, Wang not only understands his Chinese characters, but is able to communicate his understanding in natural, unforced poetic images.
Remember 1982’s Chan Is Missing? Made for an incredible $23,000, it was a knowing, multi-faceted look into the life of a Chinese-American community, and it suggested that Wang was a filmmaker worth watching.
Now comes Dim Sum - A Little Bit of Heart to confirm that he is, indeed, a genuine talent. Working with Chan screenwriter Terrel Seltzer (his ex-wife) and Chan supporting player Laureen Chew, Wang has come up with a gentle family drama, the story of a mother and daughter caught in a web of traditional obligations.
The widowed Mrs. Tam (Kim Chew, actress Laureen's real-life mother) is approaching 62, the age at which she expects to die. Before that happens, though, she wants her last live-at-home daughter Geraldine (Laureen Chew) to marry Richard (John Nishio), a Los Angeles doctor and Geraldine's long-time boyfriend.
For her own part, Geraldine is reluctant to leave her mother alone in the world. Easing communications between the two is Uncle Tam (Victor Wong), a Chinatown saloonkeeper who combines a westernized worldliness with a deep sense of family loyalty and Eastern tradition.
No hoot-and-howl melodrama, their story is told in a series of polite, unhurried moments. In and around them, Wang delicately establishes the currents of genuine love and respect that flow through these formal family relationships.
His film takes its name from those one-bite lunchtime delicacies that Chinese restaurants offer. Like a proper dim sum chef, Wang provides us with a satisfying, thoroughly filling selection of authentic treats.

Afterword: Not just a boutique filmmaker, Wayne Wang managed to maintain his independence while crossing over into the world of mainstream filmmaking. He followed Dim Sum with 1987’s Slam Dance, a  neo-noir thriller in which none of the principal characters was Chinese. He found his creative comfort zone in alternating projects. Emphasizing his Asian-American side are works such as the 1989 romantic drama Eat a Bowl of Tea, and his adaptation of Amy Tan’s bestselling novel about mothers and daughters, The Joy Luck Club (1993). In 1995, Wang directed the Brooklyn neighbourhood drama Smoke. His erotic epic The Centre of the World (2001) was released without a rating to avoid the American MPAA's NC-17, Hollywood’s scarlet letter. Wang returned to Hong Kong to shoot 1997’s Chinese Box, a story set around Beijing’s repatriation of the British Crown Colony. He has since travelled to the Mainland to direct 2011’s Snow Flower and the Secret Fan, a drama that paired stories set in 19th century China and modern Shanghai. Wayne Wang turns 73 today (January 12).