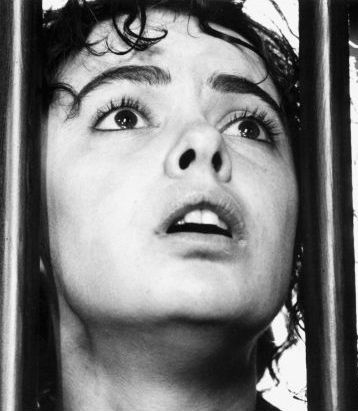 
After honing his directorial skills at Canada’s National Film Board, Jean Beaudin turned to feature filmmaking. Born on this day (February 6) in 1939, he includes among his credits the intense, fact-based tale of a woman unjustly convicted of murder, 1980’s Cordélia

CORDÉLIA. Co-written by Marcel Sabourin. Based on the 1976 book La lampe dans la fenêtre by Pauline Cadieux. Music by Maurice Blackburn. Co-written and directed by Jean Beaudin. Running time: 118 minutes. Mature entertainment in French with English subtitles. CORDÉLIA IS THE STORY of a miscarriage of justice. In 1897, a small-town seamstress named Cordélia Viau Poirier (Louise Portal) was accused of the murder of her husband, tried in the pages of Montreal’s La Presse and, almost as an afterthought, in the courts of Québec.
Cordélia, the film, was the victim of a more recent miscarriage of justice. Earlier this year [1980], its star, Louise Portal, was nominated for the Academy of Canadian Cinema’s best actress Genie Award.
When they opened the envelope, out popped the name of Kate Lynch, third-billed and a supporting player in the English-language comedy Meatballs. Now that Cordélia has finally been seen here, I can only conclude that the Academy members were determined that none of the top awards should go to a French Canadian,
Portal’s performance is outstanding. Her Cordélia is both the subject and the centre of a film that achieves a mood of high tragedy, not through any appeal to reason, but through the power of her portrayal.
Cordélia is not well-liked in rural Saint-Canut. The wife of labourer Isadore Poirier (Pierre Gobeil), she suffers from a skin condition that makes it impossible for her to do certain kinds of “women’s” work. Nonetheless, she has a zest for life and a love of music, song and good company that’s considered most improper by her more dour neighbours.
Though married, she is not afraid to entertain male friends in her parlour, and a number of young lawyers regularly stop by. Cordélia’s husband is not concerned, but local tongues do wag.
When Isadore is murdered, the gossip becomes outrage. Despite the absence of any real evidence, Cordélia is accused of having a lover — handyman Samuel Paslow (Gaston Lepage) — and of inciting him to kill Isadore.
Cordélia is a mood piece. Co-written by Jean Beaudin and Marcel Sabourin, collaborators on 1977’s award-winning J.A. Martin photographe, it was shot in the same ravishingly dreamlike style as 1971’s Mon Oncle Antoine and Kamouraska (1973). In a way, their film is a triumph of substance.
Literal-minded filmgoers will have a little trouble with Cordélia. We want more hard facts about the lady, her social relationships, her relationship with her husband and the circumstances of his death. Why does she have no female friends?
For the first half of the film, director Beaudin puts his audience in the position of the townsfolk. Our contemporary sensibilities make us sympathetic to his heroine but we can also see how her apparent lack of discretion makes her an easy target for idle chatterers.
Beaudin relies on this empathy. He expects us to be outraged when she is accused of murder. Like Joan of Arc or King Lear’s own Cordelia, her only real offence is non-conformity. She does not behave as a women of her time and place is expected to behave, and that in itself is considered criminally deviant.
Beaudin also relies on Portal. If her Cordélia fails to come alive and transcend the lack of definition in the script, if she doesn't excite in us a sense of her tragic loneliness and real specialness, the picture fails.
As with Monique Mercure in  J.A. Martin photographe, Beaudin has chosen wisely. Portal, round-faced and often looking no more than 17, takes charge of the movie and our emotions, convincing us that Cordélia’s tragedy is not just a 19th-century period piece, but a timeless drama as immediate as fem-lib and as classic as Antigone.
Portal, like Geneviève Bujold, may have to leave Canada to get the recognition she so richly deserves. Vancouver filmgoers have another chance to see her during Wednesday night’s Varsity Festival screening.

Afterword: English-Canadian audiences were introduced to Jean Beaudin in 1977. That was the year that his documentary feature Games of the XXI Olympiad, Montreal 1976 (co-directed with Marcel Carrière and Georges Dufaux) and the drama J.A. Martin photographe arrived on local screens. The fictional feature won big at the Canadian Film Awards, taking the best picture and best actress honours (for Monique Mercure, who also captured the best actress prize at the 1977 Cannes Film Festival). As noted in the above review, his next picture, the NFB-produced Cordélia, was included in the 1980 Varsity Festival of International Films, where it was screened twice.
At the time, I thought that actress Louise Portel’s not winning the 1980 best actress Genie was a miscarriage of justice. (The picture was nominated in seven categories, winning only the costume design award.) I might also have complained about local audiences having to attend a “Festival of International Films” to see a product of Canada’s domestic film industry. For reasons that I’ve never understood, the federal government’s movie mandarins expend next to no energy making films (and television) produced in Québec available in the rest of the country. Arguably, the distinct society’s moviemakers produce the nation’s best cinema, but it is a cultural argument that would be easier to make were we able to see more of the pictures made there.
For his own part, Beaudin chooses to live and work in Québec. There, he writes and directs movies and television shows that continue to feature strong female characters. In the process, he has collected a shelf full of awards. Sadly, on English-Canadian movie screens in 2019, the Marvel Cinematic Universe (MCU) rules.