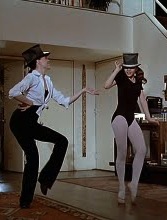 Joe Gideon's girlfriend Kate Jagger (Ann Reinking) and daughter Michelle (Erzsebet Foldi) entertain the ailing artist with a dance routine done to the song Everything Old Is New Again in director Bob Fosse's All That Jazz.

Everything old is new again


This website's immodest mission statement Everything Old Is News Again was inspired by (and plays upon) a particularly memorable moment in the 1979 musical drama All That Jazz. Midway through the film, Ann Reinking and Erzsebet Foldi do a dance routine to a recording of Peter Allen's 1974 pop song Everything Old Is New Again. Dramatically, the scene is about legacy and continuity. Reinking's character has taught the dance moves she has learned from her lover, choreographer Joe Gideon, to Foldi's character, who is Joe's daughter. The old is renewed. Reeling Back is based on a similar conviction — that the arts are always about today, and that arts journalism reflects the news as it was and is. Change may be constant, but living in a time of rapidly accelerating change can be stupefying as we see absolutely everything spinning out of control. Then we recall that the sly epigram plus ca change, plus c'est la meme chose ("the more it changes, the more it's the same thing") was written in 1849, following a year of revolutions in Europe. And we greet the summer of 2014 with a song and dance that reflects our own feelings of reassurance and renewal on the anniversary of director Bob Fosse's birth (June 23, 1927).


ALL THAT JAZZ. Co-written by Robert Alan Aurthur. Music arranged and conducted by Ralph Burns. Co-written and directed by Bob Fosse. Running time: 123 minutes. Restricted entertainment with the B.C. Classifier's warning: some nude and suggestive scenes, scenes of surgery. THE MAN IN BLACK is high above us. He is in the spotlight, precariously balanced on a tightrope. We hear his voice.
"To be on the wire is life. The rest is waiting."
"That's very theatrical," says the veiled, hauntingly beautiful Lady in White. "Did you make it up, Joe?"
"I wish I had," he answers, as we see the wire walker miss his step and plunge into the net below.
Wilkommen, bienvenue, welcome to All That Jazz, a film that offers a unique, unsparing, totally unexpected look into a man's soul, a film that may have been made by a man  fulfilling a covenant with his God.
The man on the wire is Joe Gideon (Roy Scheider), choreographer, Broadway director and Hollywood auteur. As the film opens, he is in the process of casting a new stage musical and cutting his most recent picture.
The man on the line is Bob Fosse, choreographer, Broadway director and Hollywood auteur. All That Jazz is his fourth feature, a film that, of necessity, draws upon his previous pictures — 1969's Sweet Charity, Cabaret (1972) and Lenny (1974) — because its story is his own.
Gideon, who is on the verge of a nervous collapse, is editing a picture called The Stand-up, the story of a Lenny Bruce-like comedian. Filmgoers fascinated with wheels-within-wheels plotting can begin unravelling Fosse's remarkable film right here.
The actor playing Gideon's stand-up is named Ira Newman. He is played by Cliff Gorman, who had the title role in a New York stage show called Lenny.
Fosse was on the verge of a nervous collapse during the editing of a film called Lenny, a picture that starred Dustin Hoffman as the self-destructive comedian, Lenny Bruce. Fosse suffered a heart attack shortly after the film's release.
In All That Jazz, we see director Gideon agonizing over a scene from his film, a scene in which Newman makes light of one of our society's great taboos. "Death," he says, "is a very hip thing right now."
The comedian goes on to tell us that death is experienced in five stages: anger, denial, bargaining, depression and acceptance. At one point, director Fosse cuts from an image of Newman to an image of his Lady in White (Jessica Lange), with whom we see Gideon flirting throughout the film.
Who is this alluring, nameless creature? We see her smile a warm, inviting smile, and the overlapping sound tells us that her real name is " . . . death."
All That Jazz is incredible. A stunning musical drama, it is the backstage biography to end them all. It is full of singing, dancing, wit, romance, laughter and tears.
It is also a two-hour-long death scene.
In All that Jazz, an artist considers his own mortality. Fosse shows us Gideon passing through the five stages. He opens the man's heart to us figuratively and, in a brief, explicit scene in the operating theatre, literally.
By telling us his own story, he opens himself to charges of self-indulgence. He must know that death, if taken seriously, is usually death at the box office.
Credit the man with daring. His All That Jazz is stylized, personal, serious and uncompromising.
Credit him, as well, with success. His movie is a masterpiece, a one-of-a-kind film experience.
Scheider gives a tour-de-force performance as the dynamic, driven director, a man who, in the midst of preparations for a new show, is hospitalized. He endures open-heart surgery, considers his options in a series of striking fantasy numbers, and chooses to embrace the Lady in White.
No, the movie is not a downer. Fosse, remember, chose life. Fosse lived to tell the tale. Indeed, the making of the movie may have been part of the bargain he struck, the reason why his life force prevailed.
Rich and revealing, Fosse's film is full of themes, ideas, terrific touches and magical moments. Reduce it to its essentials, though, and you discover that it's a jubilant, unashamed affirmation of life and a great mortality play.
Ignore the nay-sayers. Go see Joe Gideon die.
He'll make you glad to be alive.

Afterword: Among its many delights, All that Jazz is a great father-daughter story. The expression on Joe Gideon's face as he watches his daughter dance for him is pure love. (Along with director Bob Fosse, and the picture itself, actor Roy Scheider was an Oscar nominee.) As noted in my review, Fosse survived his own 1974 open-heart surgery. Following All that Jazz, he co-wrote and directed the backstage biography Star 80 (1983), the tragic tale of Vancouver-born model-turned-actress Dorothy Stratten. Fosse died in 1987, aged 60, of yet another heart attack.