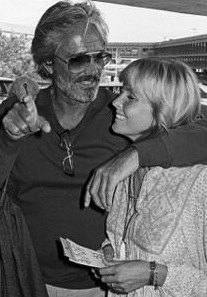 I made it for women


During a visit to Vancouver to promote the world premiere of his 1979 adult feature Love You!, writer-director John Derek spoke to UBC film students about sex, Hollywood executives and his desire to see screen pornography graduate into an art form.

JOHN DEREK, A HOLLYWOOD leading man from the 1950s, set forth his views on sex and the Hollywood executive in candid conversations with film students at the University of  British Columbia and Simon Fraser University. Derek, an actor turned director, visited the two campuses promoting his latest feature film, Love You!
The picture, his sixth as a helmer, is in its world premiere engagement, an eight-week booking in the SeaVue Theatre in border hugging Blaine, Wash.  A hardcore house,  the SeaVue draws its audience from British Columbia, where government censorship prevails and hardcore is prohibited. Love You! toplines Annette Haven and Lesllie Boveé, and features explicit footage.
Though successful as a leading man, Derek lost interest in acting in the early 1960s. "I like photography," he told the students. "I  don't particularly enjoy the shooting, but I enjoy the pictures. I became a cinematographer by desire. I walked away from acting, which is very lucrative, to do it."
He "walked" as far as the Philippines, where he directed his fIrst feature, a low-budget war movie called No Toys for Christmas (released as Once Before I Die by Seven Arts in 1966). Though it starred his then-wife, Ursula Andress, it was not a success.
A number of other independently-financed projects followed (including the 1969 releases Childish Things and A Boy . . . a Girl,  Wild Flowers, and the unreleased And Once Upon a Time), none making an appreciable impact at the box office. The trouble, Derek said, is that Hollywood executives don't bother to look at the pictures that are produced. "They all say 'send me your best reel'."
The exception, he says, is hardcore, "If they hear that you're working on a sex film, they'll hang over your shoulder in the editing room. The answer for a director who wants his work to be viewed, in toto, is pornography.
In part, Derek said, the $120,000 feature Love You!, was made because he thought it was possible to produce "beautiful" pornography. "It was kind of a challenge, and I'm arrogant and I wanted to do it."
More practically, though, the picture is his calling card to the new Hollywood establishment. "This picture will be seen by those people who will give me the money to make film-films."
Derek chose Blaine's SeaVue for his premiere because it is "the cleanest hard house I know of. The audience comes in couples, and that's what I want."
"I made (Love You!) for women," Derek said. "I enjoy women and they've been kind to me." To return the compliment he's written and directed a picture that he expects women will enjoy.
Pornography is "not yet a legitimate screen form," Derek admits. But, he said, "eventually you will see better people getting into the porno business and it, too, will graduate into an art form."

The above is a restored version of an unpublished Variety news report by Michael Walsh originally submitted in 1979. For additional information on this archived material, please visit my FAQ.

Afterword: An earlier generation knew John Derek as a capable screen actor. Reviewing his performance in 1949's Knock on Any Door, New York Times critic Bosley Crowther presciently identified him as "an idol for the girls." Before tiring of acting as a career, he played such memorable heroes as Robin Hood (in 1950's Rogue of Sherwood Forest) and Moses's Exodus lieutenant Joshua (in the 1956 biblical epic The Ten Commandments). Although his directorial career was considerably less successful financially, it offered him the opportunity to celebrate the women in his life. His first two features — 1965's Nightmare in the Sun and Once Before I Die (1966) — starred his then-wife Ursula Andress. He was married to Linda Evans when he directed her in 1969's Childish Things, and to Bo Derek when she acted as his producer for Love You!  The creative collaboration with Bo lasted for the rest of his life. She was his leading lady in his 1981 feature Fantasies, then doubled as producer/star of his final three pictures: Tarzan, the Ape Man (1981), Bolero (1984) and Ghosts Can't Do It (1989). John Derek died in 1998 at the age of 71.

Bonus feature: Yes, you read that correctly. The above item was written for, but not published by Variety. I was the U.S. entertainment trade paper's man in Vancouver at the time of John Derek's visit to B.C. Unaware that changes were taking place in the New York newsroom, I submitted a report on his talk to UBC's film students and a review of his film Love You! Both were returned to me with a letter of explanation from Variety's managing editor, Robert J. Landry. At the time, I did not know about the September 1977 death of Addison Verrill, Variety's point man on porn coverage, or the circumstances (he'd been murdered). In his letter, Landry shared with me some of the soul-searching that was going on in the editorial offices of "the show business bible" circa 1979.

Dear Mr. Walsh,
About pornography, we have a problem. For some years, we reported such productions and their playoff in considerable detail. Especially because the late Addison Verrill of this staff followed the phenomenon with considerable inside knowledge and imagination.
Trouble developed because many of the characters in hardcore are dubious, of unknown background. There is also the question of calling women who indulge in oral sex on camera, "actresses", or worse, "stars".
As time wore on, certain facts had to be faced. We ran some risk of "promoting" what we only meant to "report". Then there were cases where it was suspected that hardcore theatre grosses might be over-quoting income in order to "launder" money obtained from other sources.
That some of the operators were terribly upset when we started to play down porn confirmed the value to them of VARIETY notice. Nor did we appreciate being quoted in lobbies alongside "Screw" Magazine.
All this is by way of explanation. We were not much interested in John Derek seeking to "make it" as a producer via sex as a spectator sport after failing as a "straight" filmmaker. As for his lecturing on the art of oral sex to a college class, that's surely another example of our times, but not very much down our line.
Anyway, return the Derek copy herewith.