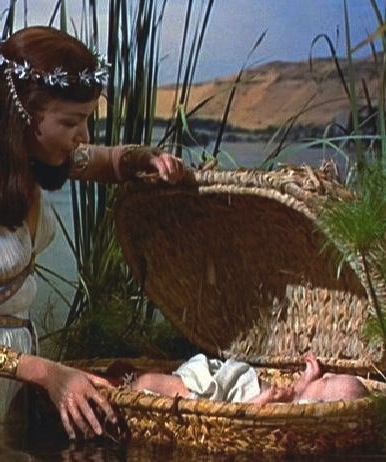 Fraser Heston, the three-month-old son of Charlton, makes his feature film debut as the infant Moses, discovered in the bulrushes by the Pharaoh's daughter Bithiah (Nina Foch) in Cecil B. DeMille's The Ten Commandments (1956).

So let it be written


DeMille's second go at Exodus his final act of excess


There is at least one intentionally funny line in 1956's The Ten Commandments. It's delivered by the Pharaoh Seti (Cedric Hardwicke) as he lies on his deathbed, listening to the high priest praising his greatness. “The old windbag!” he quips to the princess Nefretiri (Anne Baxter). I like to think that line was slipped in by a mischievous screenwriter describing his boss, the autocratic director Cecil B. DeMille. Born on this day (Aug 12) in 1881, DeMille was legendary as a self-promoter, the showman who said (in a 1927 Ladies' Home Journal interview) "the public is always right." Doubts about his sincerity notwithstanding, the fact remains that he is unique in having been a major industry presence in both the silent and sound eras, directing 77 features during a 42-year career. He made his debut with a Western (1914's The Squaw Man) and his reputation with a series of steamy domestic dramas with titles such as Forbidden Fruit (1921). He's best remembered today, of course, for his overwrought adaptations of scripture, beginning with 1923's The Ten Commandments. For all of his commercial success, he was never a critic's darling. Nor was he beloved within the film community. His single Oscar win was as producer of 1952's Best Picture, The Greatest Show on Earth. DeMille's next film was his last, a no-expense-spared remake of The Ten Commandments.

Wednesday, May 31, 1972.
THE TEN COMMANDMENTS. Written by Aeneas MacKenzie, Jesse Lasky Jr., Jack Gariss and Fredric M. Frank. Based on the books Prince of Egypt by Dorothy Clarke Wilson, Pillar of Fire by J.H. Ingraham, and On Eagle's Wing by A.E. Southon. Music by Elmer Bernstein. Produced and directed by Cecil B. DeMille. Running time: 219 minutes. General entertainment. BACK AGAIN, AND INTO its second week on Theatre Row [in Vancouver], is  Cecil B. DeMille's archetypal religious epic The Ten Command ments. With its cast of thousands, an uncut running time of 219 minutes, a dozen name stars and an Oscar's worth of special effects, it is the tastiest bit of cornball this side of a C.G.I.T. weenie roast.
DeMille, who died in 1959, had a flair for combining exotic sexuality with overblown religiosity. He started early — his original silent-era Ten Commandments, starring Richard Dix, Estelle Taylor and Rod la Rocque, was made in 1923.
He inflated his pictures into ever larger epics— The King of Kings (1927), The Sign of the Cross (1932), The Crusades (1935), Samson and Delilah (1949) — and topped them all with his final directorial turn, the 1956 feature now [1972] rereleased to amaze and inspire us.
The Ten Commandments is an example of a film so thoroughly bad that it's good. As art, the film is on a par with fringed Souvenir of Kamloops pillowcases.
Like the orbiting Howard Johnson's in Kubrick's 2001: A Space Odyssey  (1968), it's admirable for the amount of effort and technical expertise expended to achieve cultural kitsch. It's the mounting of it it that's fun, an unbelievable framework that has provided enough entertainment to make the film an unqualified popular success.
A reviewer looking at the film for the first time might run down a check list of conventional movie elements and never once utter a kindly word. For example:
*    Script — In  the beginning was the word and De Mille, in order to enhance it, brought in four scriptwriters. Working from three novels and "Holy Scripture," they fashioned a story designed to glow with goodness, ring with righteousness, and offend no one at all.
Unfortunately, in order to do so, they had to play fast and loose with both religion and history. The concept of a Chosen People, so necessary to any real understanding of Old Testament Judaism, is here watered down to a fuzzy-minded quest for national liberation.
As a preacher, Moses (Charlton Heston) ends up sounding more like Billy Graham than the author of Exodus. His teaching consists of a bland motherly-love ethic deemed least likely to stir the minds of the international audience.
To provide their prophet with a palatable message, the writers scoured both Old and New Testaments and, I suspect, The Federalist Papers, for the right combination of noble phrases and liberal philosophy.
*    Plot — Would you believe a people — in bondage for 400 years, living on their unique faith and a pious legend that promises a deliverer to set them free, confronted with an heir apparent to their oppressor's throne who claims to be their deliverer, who backs up his claim with a number of miracles that include the parting of the Red Sea and the destruction of a pursuing army — would you believe they'd abandon their faith and their deliverer after a mere 40 days at the foot of their Holy Mountain?
Would you really?
*   Casting — Star power was the order of the day. During the film's initial release, much was made of Charlton Heston's resemblance to Michelangelo's Moses, a statue carved in Italy some 2,800 years after the Biblical events.
The comparison revealed much about DeMille's approach to casting. The director put together an entire collection of statues, a selection of attractive, unmotivated actors to pose in front of his expensive scenery, wear his expensive costumes and speak his unbelievable lines.
*    Presentation — Despite the evidence of your eyes, almost none of the name stars ever stepped outside of Hollywood during filming. Virtually every scene was shot with De Mille's incredible lack of camera movement or style, on Paramount studio sound stages.
Second unit director Arthur Rosson's location work in the Middle East provided the exteriors that were matted in behind the studio work. In some cases, the editors had to combine studio, location and model work in a single scene. Despite their remarkable achievements, the studio work still looks like studio work.
Narrated by C.B. himself, the film has a portentousness unmatched in film history. Elmer Bernstein's wonderfully over-the-top score, full of sounding trumpets, ram's horns and crashing chords, fits the mood perfectly.
The list could go on, for the film's faults, like its concept, are massive.
Locally, the Capitol Theatre has an absolutely first class VistaVision print. They don't make movies in the VistaVision big screen process any more — CinemaScope won that battle — nor do they make them in the style of The Ten Commandments. Both the process and the style remain fun to look at, marvels that must be seen to be disbelieved.

Afterword: Although I can find no online evidence that Cecil Blount DeMille ever set foot in this country, I know of two veritable Canadian connections. In 1920, C.B. and his wife Constance adopted the Vancouver-born Katherine Paula Lester, a nine-year old orphaned by the deaths of her father, a Canadian Army officer killed in the First World War, and her mother, who succumbed to tuberculosis. As Katherine DeMille, she made her acting debut in her stepdad's 1930 feature, Madam Satan. In 1937, she became the first wife of actor Anthony Quinn, and together they had five children. C.B.'s other Canadian connection was his first film shot in colour, 1940's North West Mounted Police. A somewhat fanciful account of the 1985 Riel Rebellion shot entirely in the U.S., it tells the story of Texas Ranger Dusty Rivers (Gary Cooper) whose pursuit of an outlaw takes him to Saskatchewan. To make nice with the natives, Paramount Pictures held the film's world premiere on October 21, 1940, in Regina's Capitol Theatre.