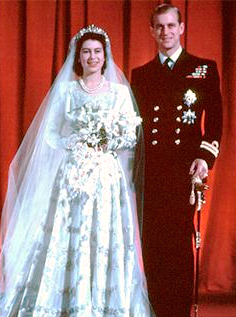 The 1947 marriage of Britain’s Princess Elizabeth to Philip, the Duke oF Edinburgh, is an occasion for celebration in director Malcolm Mowbray’s 1984 social comedy A Private Function.


Officially, Britons celebrate the birthday of their Queen on the second Saturday of June. In fact, Elizabeth Alexandra Mary Windsor was born on this day (April 21) in 1926. The longest-reigning monarch in the history of the United Kingdom, Elizabeth II not only enjoys two birthdays, but two parallel movie careers. Since 1971, at least 15 actresses have played Her Majesty in big screen films. The most memorable to date has been Helen Mirren, who took home the 1966 best actress Oscar for her performance in the title role of director Stephen Frears’s The Queen. More than 30 others have taken on the regal role on various TV productions (notably Emma Thompson in 2012). Celebrity look-alike Jeannette Charles made a living of it, appearing in some 25 features, made-for-TV movies and series episodes since 1974. Ms Charles has been featured opposite a number of Elizabeth’s Canadian subjects, such as Leslie Nielsen (1988’s The Naked Gun) and Mike Meyers (2002’s Austin Powers in Goldmember). Elizabeth II’s other film career began in 1939, when Alexander Korda included newsreel footage of the teenaged princess in his patriotic drama The Lion Has Wings,. To date, more than 300 documentarists and fictional filmmakers have made use of the endless images of her very public life. In 1984, director Malcolm Mowbray included scenes of her 1947 royal wedding in his period comedy A Private Function.

A PRIVATE FUNCTION. Written by Alan Bennett. Music by John Du Prez. Directed by Malcolm Mowbray. Running time: 99 minutes. Mature entertainment with the B.C. Classifier’s warning: occasional nudity and suggestive scenes. “MY WIFE HAS TWO TOPICS of conversation,” lawyer Frank Lockwood (John Normington) confides to his fellows in a moment of unexpected candour.
“One is the Royal family, and the other is her bowels.”
These hardly seem the basis for a promising relationship. And yet alimentary matters, the house of Windsor and wives are the specific subjects of A Private Function, a smashing new comedy from Britain’s HandMade Films.
The time is November, 1947. Amidst the grimness of a new social order, fiscal austerity and food rationing, the English are preparing to celebrate the marriage of their Princess Elizabeth to naval officer Philip Mountbatten.
In one small Yorkshire town, the provincial establishment plans to recognize the occasion with a proper banquet. To insure the success of the event, the local social leaders — lawyer Lockwood, Dr. Charles Swaby (Denholm Elliott) and accountant Henry Allardyce (Richard Griffiths) — have conspired to procure an unlicensed pig.
Not on the function’s exclusive guest list is struggling young chiropodist Gilbert Chilvers (Michael Palin), a man Dr. Swaby dismisses as a “toenail clipping little sod.” Honest, eager-to-please Chilvers and his cinema organist wife Joyce (Maggie Smith) are not part of the local select set.
The civic worthies underestimate the power of Mrs. Chilvers’s social aspirations. Joyce has already grasped the special importance of meat in postwar Britain.
“It’s not just steak, Gilbert. It’s status.”
They also underestimate the highly mobile foot surgeon's powers of observation. He’s on to their project and, driven to desperation by the combination of Swaby’s contempt and his wife’s determined nagging, Chilvers plots the pilferage of their precious pig.
At a time when most American movie comedies are keyed to the tastes of the teenaged audience, it’s a relief to know that someone, somewhere is making fresh, funny films for adults.
Thanks are due to screenwriter Alan Bennett, the fourth and, perhaps, least known of the original Beyond the Fringe comedy troupe, for cheerfully laying bare those appetites for position and protein that no amount of policing can suppress.
Superbly cast and shrewdly observed, first-time director Malcolm Mowbray’s A Private Function abounds in period touches and a matter-of-fact madness that rings true throughout.
“It’s not just pork, Gilbert. It’s power.”

Afterword: Though favourably reviewed in the big cities, A Private Function was less than a hit with the mass audience during its U.S. release. The Brits, on the other hand, got the joke, and it was a 1985 British Academy of Film and Television Awards nominee in the best picture and screenwriter categories. Maggie Smith took home the BAFTA best actress honour. A Private Function was the 13th of 27 features released by HandMade Films, a production company founded on a whim by former Beatle George Harrison in 1978 to finance Monty Python’s Life of Brian.