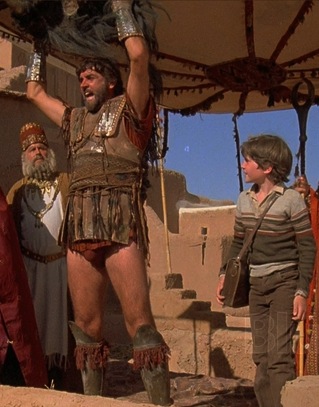 Once and future delight


Literate laughter, and not just for kids


Among the current complications on our favourite prime-time soap opera, Once Upon a Time: Regina Mills, a.k.a. the Evil Queen (Lana Parrilla) and Robin Hood (Sean Maguire) are in love, but can't be together because Robin's wife Marian (Christie Laing), thought to be dead, returned at the end of Season Three. But now, as we near the mid-point of Season Four, Marian is in a frozen coma, the result of an encounter with the Snow Queen (Elizabeth Mitchell). Filmed in and around Vancouver, Once Upon a Time is an example of the re-imagining of traditional literature and folklore that is enriching our popular culture. Its creators (Edward Kitsis, Adam Horowitz) enjoy access to more than 75 years of Disney productions, and have apparently been given a free hand in the shaping of their myth. The result has been a grand melding of characters and their histories into a self-referential, often comic family saga that just gets more deliciously complex with every episode. The narrative, which takes place in fantasylands that exist in parallel with modern Storybrooke, Maine, involves much time travel. Its producers, some argue, are just bandits, stealing their ideas from the established lore. Personally, I love living in an age of such meta marvels, and am grateful to its great pioneer, writer-director Terry Gilliam. Born on this day (November 22) in 1940, he blazed the trail with 1981's Time Bandits.

Tuesday, November 10, 1981.
TIME BANDITS. Co-written by Michael Palin. Music by Mike Moran. Co-written and directed by Terry Gilliam. Running time: 110 minutes. Rated Mature with the B.C. Classifier's warning: many scenes may frighten young children. IT'S NOT PERFECT, LORD knows. Made in just seven days, the fabric of the Universe is shot through with holes.
One of those holes is inside the bedroom wardrobe of an imaginative English lad named Kevin (Craig Warnock). Occasionally, it opens to disgorge nocturnal surprises, such as a fully armed and armoured knight, mounted on his tournament charger.
One night, it produces the Time Bandits. The most colourful and effective ensemble of miniature players since Snow White set up housekeeping with those diamond-mining dwarves, the time bandits are renegade employees of The Supreme Being.
As Randall (David Rappaport) explains to Kevin, The Supreme Being handled all of "the big stuff — good and evil, man and woman." Randall and his diminutive associates did the fill-in work, "the trees and shrubs."
Now they have come into possession of the map charting the position of every time flaw in creation, and they've run off to become "international criminals."
It's not perfect, Lord knows, but Time Bandits, the most recent reunion of the Monty Python comic collective, is jolly good. It's also slyly subtle, wonderfully witty and just plain bloody marvellous, a first-class production from beginning to end.
From the promotional point of view, though, it is a problem picture. The Python persons went to school, you know, and their approach to entertainment is aggressively non-egalitarian.
A few years ago, an American encyclopedia publisher raised a few hackles by pitching its product in a series of magazine advertisements addressed to "people who are not ashamed of having brains." The ads were considered offensive because they violated one of our society's strongest taboos.
In a democracy, one does not discriminate on the basis of intelligence.
Unfortunately, Python alumni Terry Gilliam and Michael Palin do. Filmgoers who just can't get enough of Steve Martin, and who laugh uproariously at Cheech and Chong's joke, are likely to draw a bit of a blank with Time Bandits.
Here we have entertainment for the liberally educated. When Kevin drops in upon Agamemnon (Sean Connery), king of Mycenae, the screenwriters assume that their audience is familiar with his majesty's post-war marital problems.
It stands to reason.  Agamemnon, leader of the Greek forces that besieged Troy, was a principal character in Homer's epic The Iliad, and in the plays of both Euripides and Aeschylus. If you recall what happened to Iphigenia on Aulis, well then, you'll know why Queen Clytemnestra (Juliette James) spends her time glaring at him.
If you don't, then you'll miss one of director Gilliam's more poignant ironies. As the tea tippler in those television commercials says: "Pity."
The Pythons are, in the best sense of the word, intellectuals. With the exception of 1972's And Now for Something Completely Different (an anthology of routines from the TV show), each of their feature films has been rooted in material familiar to all classically-educated Englishmen.
Jabberwocky (1977), made under Gilliam's direction, offered medieval social history filtered through Lewis Carroll. The Holy Grail (1975), directed by Gilliam and Terry Jones, explored Malory, Tennyson and Karl Marx. Life of Brian (1979) directed by Jones, spoofed screed, C.B. De Mille and everything we learned in Latin class.
Now, in Time Bandits,  it's Clive Staples Lewis's turn. The Cambridge don responsible for several theologically-based works of science fiction, the Narnia chronicles and The Screwtape Letters, Lewis is lovingly mocked throughout.
As Kevin and his bandit buddies leap about in time and space, (a special effects show worth the price of admission all on its own), they are pursued by The Supreme Being (Ralph Richardson, utterly convincing in his portrayal of God as an Englishman), and manipulated by The Evil Genius (David Warner).
When we first see Evil on screen, good grief, it's Uncle Screwtape! He wants the bandits' map so that he can usurp the power of the Almighty.
He's counting on mankind's attachment to material things to help him along. "God," he cogently reasons, "isn't interested in technology. He knows nothing of microchips or the silicon revolution."
As in Lewis's Narnia stories, Time Bandits takes the form of a children's adventure-fantasy. Kevin, a sterling performance from child actor Warnock, is the hero of the piece, gaining wisdom and knowledge as the classically structured tale unfolds.
As in Lewis, the ideas and the humour are adult, even if all of the participants are not. Dwarf performers Rappaport, Kenny Baker (R2D2 in Star Wars), Jack Purvis, Mike Edmonds, Malcolm Dixon and Tiny Ross, are a memorable lot as the bickering bandits Randall, Fidgit, Wally, Og, Strutter and Vermin.
For filmgoers not afraid to exercise their brains, Time Bandits offers up a graduate's garden of literate delights.

Afterword: The first in what Terry Gilliam called his "Trilogy of the Imagination," Time Bandits was a critical and financial success. Despite that, his second and third "Trilogy" features — 1985's Brazil and The Adventures of Baron Munchausen (1988) — failed to excite industry executives as much as the critics. Both were brilliant but "troubled" films. Because they were not well marketed, they were not profitable, and Gilliam had difficulty raising money for his projects ever after. Such discouragements notwithstanding, he continued to create new tales using time travel (Twelve Monkeys; 1995) and folklore (1991's The Fisher King and The Brothers Grimm; 2005). And, yes, Gilliam's story has some fine Canadian connections. His Adventures of Baron Munchausen featured eight-year-old Sarah Polley and 62-year-old John Neville in its starring roles. His 2005 dark fantasy Tideland, though set in rural Texas, was shot in and around Regina, Saskatchawan. It starred Jodelle Ferland and Brendan Fletcher, both B.C.-born performers. In 1995, Gilliam's eldest daughter, Amy, relocated to B.C., where she became a producer with Vancouver's Infinity Productions. In 2007, she produced her father's Anglo-Canadian feature The Imaginarium of Doctor Parnassus, and is credited with saving the film after the 2008 death of its star, Heath Ledger. Filming of its fantasy sequences took place in Vancouver with Johnny Depp, Jude Law and Colin Farrell playing variations on Ledger's character within the "imaginarium" of the title. Father and daughter worked together most recently on his 2013 feature The Zero Theorem, described by New York Times critic A.O. Scott as a film "about the erosion of individuality in a technocratic, corporate-dominated society and about the collapsing boundary between work and leisure." One more example of the film industry's inability to market truly imaginative movies, the picture was given "limited" release in the U.S. in September, 2014.