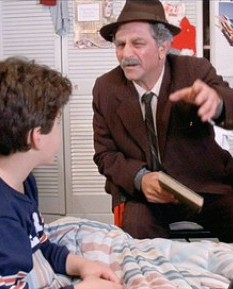 
When television was called books


A Princess & Pirates Weekend begins today (September 16, 2017) in Peoria, the Illinois city that has come to symbolize middle-American values. By coincidence, the celebration falls on the birthday (in 1927) of Peter Falk, who made the story come alive in 1987’s The Princess Bride.

ONCE UPON A TIME, beneath the clear blue skies of a faraway land, there lived a beautiful princess. Her name was Buttercup (Robin Wright), and she was the chosen bride of Prince Humperdinck (Chris Sarandon), heir to the throne of Florin.
To all appearances, she was the most fortunate of women. Even so, Buttercup bore within her a great sadness. Though beloved of the people and betrothed to a prince, she mourned for a lost love, her True Love, the noblehearted freeborn youth Westley (Cary Elwes).
Still with me?
Be honest.
Personally, I don’t think you're really interested in an old-fashioned, straightforward fairy tale. A few years ago, when 20th Century-Fox researched the market for a story idea called Star Wars, it discovered that hardly anybody wanted to see a movie with a princess in it.
Well, little Billy (Fred Savage) isn’t keen on princess stories either. Home from school with the flu, he’d rather sit up in bed and play video games.
He’s really not interested in The Princess Bride, the dusty old book that his grandfather (Peter Falk) once read to Billy’s father, and that he now proposes to read to Billy. Like you, though, the kid tries to be polite.
Much to Billy’s surprise, grandpa turns out to be a natural-born storyteller. As he listens, S. Morgenstern’s "Classic Tale of True Love and High Adventure" comes to life with irresistible verve and energy.
By now I expect you’ve figured out that The Princess Bride is no ordinary fairy tale. William Goldman’s 1973 novel was presented as an adult’s nostalgic recollection of  “the good parts” of an overlong historic adventure.
Director Rob Reiner’s screen version (from Goldman's own screenplay) is a slick, knowingly comic film fantasy.
Like Billy’s grandpa, Reiner emerges as a natural storyteller with a keen sense of his audience. Though filmgoers may not be interested in princesses, a look at a child’s introduction to the world of imagination is a fine, suitably adult subject.
As in his previous feature, 1986’s Stand By Me, Reiner uses the surround story to place his central story within a context. As a result, we’re all in on the joke as grandpa’s somewhat skewed tale unfolds. It's a fine, ripe swashbuckler that recalls Burt Lancaster’s classic  1952 action comedy, The Crimson Pirate.
Kidnapped on the eve of her wedding, poor Buttercup finds herself the prisoner of ruthless Sicilian master criminal Vizzini (Wallace Shawn), and his mismatched henchmen, the besotted Spanish swordsman Inigo Montoya (Mandy Patinkin) and the rhyming Turkish strongman Fezzik (André the Giant, a French-born Hulk with an Arnold Schwarzenegger accent).
Just when she thinks things can’t get worse, she is “rescued” by the dread pirate Roberts, a brigand in a Zorro-like black costume who turns out to be . . .
No, telling would ruin the fun, and fun is what Reiner's fabulous film is all about. A bright and brassy fairy tale romance with a distinctly New York flavour, his Princess Bride is a treat that will appeal to all ages.

Afterword: Bored by his job as a Connecticut civil servant — he had a masters degree in public administration — Peter Falk was in his late 20s when he joined an amateur theatre troupe in Hartford. In 1956, he set off for New York in pursuit of a stage career. Squat and swarthy, his intense presence was amplified by the squint that resulted from a glass eye. When he made the transition to TV and movie roles, he won parts as bartenders and boxers, mobsters and miscreants. Among those who promoted Falk’s less sinister dramatic talent was independent director John Cassavetes, with whom he made five features.
Falk became a popular-culture icon as the self-effacing Los Angeles homicide detective Frank Columbo, a role he made his own in 69 series episodes and 24 made-for-TV movies. A study in unkempt distraction, Columbo was the anti-Sherlock who always got his apparently more intelligent man (or woman). Less well known are his three late-career outings as Max, the quirky guardian angel who brings seasonal joy to those in need of it in the made-for-TV features A Town Without Christmas (2001), Finding John Christmas (2003) and When Angels Come to Town (2004). The first two were shot in Halifax and the third in Montreal, which provides him with a nice Yuletide Canadian connection. Peter Falk died in 2011 at the age of 83.