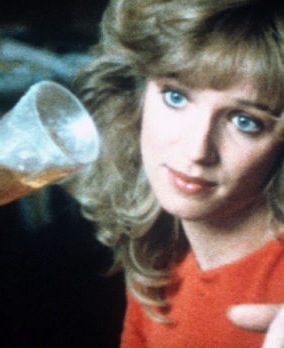 Cindy Worth (Lisa Langlois) shares a drink with her invisible lover in director Bruce Malmuth's 3D comedy The Man Who Wasn't There (1983).


A Sensation, A Scene and A Smile


Beware the ides of March! On this day (March 15) in 44 B.C., Julius Caesar was stabbed to death on the steps of the Roman Capitol. In Shakespeare's version of the story, the popular politician was on his way to the Senate, where he expected to be proclaimed emperor. His assassins, who saw him as a threat to their power and privilege, actually hastened the very changes that they most feared. Today in the U.S., presidential primary elections are being held in Florida and Ohio. A win in either state practically ensures that would-be American Caesar Donald Trump will be the Republican Party's nominee. Those who would stop him are desperately afraid of the changes that a Trump presidency could bring about. With the outcome of this historic moment still unknown, let's take time out to consider a more immediate question: Do 3D movies give you a headache? In mid-February, Russian researchers presented a paper at the 2016 Stereoscopic Displays and Applications conference in San Francisco. It said that two-thirds of moviegoers feel some discomfort watching them. Among those whose careers may have been hurt by an association with a painful viewing experience is Canadian actress Lisa Langlois. Born on this day (March 15) in 1957, Langlois was "introduced" to American audiences in a 3D feature, director Bruce Malmuth's 1983 comedy The Man Who Wasn't There

Sunday, August 14, 1983.
THE MAN WHO WASN'T THERE. Written by Stanford Sherman. Music by Miles Goodman. Directed by Bruce Malmuth. Running time: 111 minutes. Mature entertainment with the B.C. Classifier's warning: occasional violence, nudity,  suggestive scenes and coarse language. BY RIGHTS WE SHOULD resent this guy. Frank Mancuso Jr., the 24-year-old son of Paramount Pictures senior executive Frank Mancuso, has it all figured out.
Junior has reduced successful movie-making to a two-point formula. Offer filmgoers a Sensation, and send them home talking about a Scene. Word-of-mouth advertising will do the rest.
It worked for his first film as producer, director Steve Miner's 1982 Friday the 13th Part III in 3-D. A no-name remake of the two previous pictures, it was technically slick and drew the year's biggest audience yetch! for its infamous eyeball-in-your popcorn scene.
There's no reason why it shouldn't work for The Man Who Wasn't There, an energetic chase comedy involving an invisible man. Again, Mancuso is relying on the 3-D format to start the box-office ball rolling.
Technically, his picture offers the best commercial depth-vision photography yet seen. Sharp and steady, its Optimax III process sets a new standard against which future stereoscopic movies will be judged.
The Scene, around which the entire film may well have been planned, features Canadian actress Lisa Langlois. She plays Cindy Worth, whose sister Amanda (Morgan Hart) is engaged to marry Sam Cooper (Steve Guttenberg).
When Sam, a U.S. State Department junior bureaucrat, becomes involved with crooks, spies and a secret invisibility formula, sweet Cindy becomes involved with Sam. In the Scene, they make love.
What makes it memorable is actor Guttenberg's physical absence. Sam is supposed to be invisible, so actress Langlois is playing solo, miming her half of their passionate encounter while the special effects team does the rest.
Distancing us from the Scene — and significantly cooling its erotic content — is the fact that we see it through the eyes of four elderly voyeurs. A quartet of cultured gentlemen meeting in a high-rise apartment equipped with high-powered telescopes, they are a comic, essentially cartoon, embellishment.
Indeed, under the direction of Bruce (Nighthawks) Malmuth, the film has the ingenuous tone of a knockabout Disney adventure. Full of squeaky-clean nudity, it is the sort of picture that the Disney Studio technicians might make if they wanted to shock the socks off the Middle American audience for pictures like their 1972 comedy, Now You See Him, Now You Don't.
Happily, producer Mancuso's The Man Who Wasn't There offers something more than just a Sensation and a Scene. The unexpected bonus here is a Smile.
The Smile belongs to Langlois, 23, a young lady who gives the somewhat silly project an actual touch of class. The screen shines every time she is in view.
Blessed with a smile that lights up a scene faster than a bank of photofloods, she is an actress on her way to stardom.

Afterword: How wrong I was. Producer Mancuso Jr.'s formula failed him, and The Man Who Wasn't There was a boxoffice disaster for Paramount. He continued his association with the Friday the 13th film franchise and its spinoff television series (filmed in Toronto), and made a career of producing offbeat, low-budget genre films. Among his more interesting collaborators was adult animator Ralph Bakshi, with whom he made 1992's Cool World. As for director Bruce Malmuth, The Man Who Wasn't There was a setback from which his career never fully recovered. For actor Steve Guttenberg, the A-list star who never was, success of a sort came a year later with Police Academy, his first of four starring roles in that comedy franchise. In 2001, the Coen brothers recycled the title (but not the plot) of The Man Who Wasn't There for their own original film noir crime drama.
The "introducing" credit for Lisa Langlois is one more example of Hollywood-centric hype. Born in North Bay, Ontario, the bilingual actress made her feature film debut under the direction of Claude Chabrol in 1978. She had a co-starring role alongside Donald Sutherland in the Franco-Canadian co-production Les liens de sang / Blood Relatives. The same year, she worked in Paris opposite Isabelle Huppert in Chabrol's Violette Nozière. Before her "introduction" in The Man Who Wasn't There, Langlois appeared in seven more Canadian features, including the made-in B.C. Klondike Fever (1980). Her first American movie did not provide the breakthrough that I believe she deserved. Afterwards, Hollywood producers tended to cast her in scream queen roles;  she works regularly on both sides of the border.  During her occasional visits to B.C., she appeared in The Final Cut and White Tiger (both 1996), as well as Poe: Last Days of the Raven (2008). She also starred in episodes of the Vancouver-based TV shows Beyond Belief: Fact or Fiction and PSI Factor: Chronicles of the Paranormal (both 1998) and The L Word (2008). Today (March 15) is Lisa Langlois' 57th birthday.

See also: Other 3D features in the Reeling Back archive are the 1954 Hitchcock classic Dial M for Murder; the made-in-B.C. sci-fi adventure Spacehunter: Adventures in the Forbidden Zone (1983); and Joss Whedon's 2012 superhero feature The Avengers.