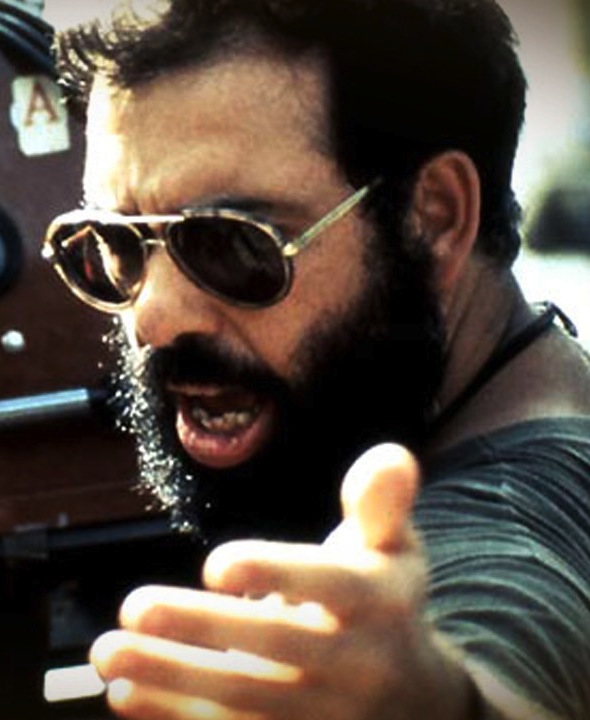 Director Francis Ford Coppola sets up a shot during the filming of his 1979 feature film Apocalypse Now.

We all went a little crazy


Filmmaker looks to next adventure


In an interview in New York, following the 1979 preview screening of Apocalypse Now, director Francis Ford Coppola mused that he was "losing years off my life."

I don't like work — no man   does — but I like what is in the work, the chance to find yourself. Your own reality — for yourself, not for others — what no other man can ever really know. They can only see the mere show, and never can tell what it really means.
— Joseph Conrad, from
Heart of Darkness (1899)

NEW YORK — In private, Francis Ford Coppola is forthright, expansive, wry and funny. He admits to having fears and problems, many of his own making, "My wife tells me I put myself in these tight spots to justify my own anxiety. ''
In public, Coppola (pronounced Coe-pole-ah) can be tense and defensive. On the morning following the official press screening of his multimillion-dollar epic Apocalypse Now, he faces a room full of reporters with forced good humour.
His film is a triumph. The reporters are, for the most part, in awe. And yet Coppola, looking for all the world like a community college social-psychology teacher behind his black beard and glasses, is a bundle of raw nerve endings.
He finds it difficult to hide his annoyance when asked his opinion of the Vietnam war. "My movie is my opinion," he says emphatically.
The premiered version ends differently from the work-in-progress print shown at Cannes. What does this mean?
"That's the end of my movie, guys. Whatever you take away, that's what you take away."
Coppola is known to have agonized over the film's finale. At least three different versions were tried out. Sneak preview audiences were invited (via a three-page questionnaire) to participate in the shaping of the final film.
The reporters press him on this point, and Coppola gives way to his anger. "It's offensive to me to come in with a film I've worked on for five years, and find that people are having a controversy about the ending."
During the picture's long gestation period, Coppala has felt used and abused by the press. The bearpit format of the press conference serves only to magnify the antagonism.
Outside the crowded room, in a one-to-one conversation, the filmmaker is congenial and relaxed. "Sometimes I think: 'why don't I just make my wine, do some dumbbell movie every two years and take trips to Europe with my wife and kids?'
"I've had it in terms of going to incredible extremes, half-blowing my personal life, just to make a movie. I'm always going to bed in a cold sweat. 'Will that star do the picture? How am I going to film this scene? Will they like it?' I know that feeling translates itself into your insides. I know I'm losing years off my life."
Eleven years ago [1978], a few hours before the world premiere of his Finian's Rainbow, Coppola expressed similar feelings to Newsday reporter Joseph Gelmis. "I've come to the point where I just want to get out altogether.
"I just want to do my own thing,'' he said. "And I may do that. I'm fed up. It takes too much out of you . . . I think a lot of people are jealous of me. Basically, my contemporaries.
"They say 'well, there he is, 28, 29 years old, he's got a lot of money and he's making movies.' They wouldn't want it.
"Not much. They want it.
"They just think I'm living this golden life and they don't realize that I am, really straining and endeavouring to find some honest balance with myself in terms of the work of the future. I'm more interested in the films that I'll make when I'm 40 than I am now. "
On Saturday, April 7 [1979], Francis Ford Coppola celebrated his 40th birthday. The future is Apocalypse Now.

*   *   *
No, it is impossible; it is impossible to convey the life sensation of any given epoch of one's existence — that which makes its truth, its meaning — its subtle and penetrating essence. It is impossible. We live, as we dream — alone . . .
— from Heart of Darkness

Apocalypse Now began as a low-budget American Zoetrope project. Military buff John Milius worked up an adaptation of Conrad's 1899 tale of colonial Africa, Heart of Darkness. George Lucas planned to film it in 16mm to capture the feeling of a television newscast.
It remained on the shelf until 1974. Lucas was totally involved with Star Wars, so Coppola decided to rewrite and direct it himself. In 1976, he described his plans to Ms Magazine's Susan Braudy.
"The jungle will look psychedelic," he told her. "Fluorescent blues, yellows and greens. I mean, the war is essentially a Los Angeles export, like acid rock. Like in Heart of Darkness, Kurtz has gone savage, but there's this greatness in him.
"We are all as much products of this primitive earth as a tree or native whooping around. The horror that Kurtz talks about is never resolved. As Willard (the assassin sent to "terminate" the renegade Kurtz) goes deeper and deeper into the jungle he realizes that the civilization that has sent him is more savage in many ways than the jungle. I mean, we created that war."
In March, 1976, production began. In retrospect, Coppola admited to me that "the jungle took over. We all went a little crazy."
Part of the craziness was an affair that Coppola had, that was revealed in Eleanor Coppola's recently published diary, Notes on the Making of Apocalypse Now (1979). Despite the strain on their relationship, the Coppolas remain together. Shortly before the film's premiere, Coppola told the New York Times that now "there is no other woman."
Discussing press reaction to Apocalypse Now, Coppola explains that "I'm a theatre person.'' Traditionally, theatrical properties are shaped in tryout performances. Indeed, Vancouver film people were among those invited (by actress Talia Shire, who made friends in B.C. during the filming of 1979's Prophecy) to the private, rough cut screenings.
His unorthodox, public approach to post-production, combined with the film's much delayed "official" premiere, left Coppola vulnerable to gossip, speculation and just plain cheap shots. Now, with the picture officially released, that phase is over.
"I'm done with easy, predictable projects," he says jokingly. "Having gone through that, I think I want to tackle things that will be all the more unorthodox and ambitious. I just couldn't go back to making genre movies, Every new project will be an adventure."
A deal, involving a $1-million down payment, is now pending. It would give Francis Ford Coppola control of the Hollywood General Studio lot.
"I want to run a movie studio,'' he says with some relish, "and we're going to have our own.''

The above is a restored version of a Province interview by Michael Walsh originally published in 1979. For additional information on this archived material, please visit my FAQ.

Afterword: Coppola continues to make movies, his most recent feature being the 2011 thriller Twixt, with Val Kilmer and Bruce Dern. Though none of his 14 subsequent films have  achieved the dizzying prominence of The Godfather or Apocalypse Now, each one has demonstrated the ambition he spoke of in our interview. Wine, or more precisely a winery, has contributed to the balance he has found in his life. In 1975, he used his Godfather earnings to buy a home and adjacent vineyard in California's Napa Valley. His hospitality enterprise prospered, and today includes resorts, a restaurant and lifestyle products. Then there is family. Earlier this year, the Coppolas celebrated their 51st wedding anniversary. Immediate family, including his daughter Sofia and sister Talia Shire, had roles in all three Godfather films. (In her own right, Sofia Coppola has become an Oscar-winning writer, and a director nominee.) Roles in three Coppola movies helped his nephew, Nicolas Cage, establish himself as a feature film actor.