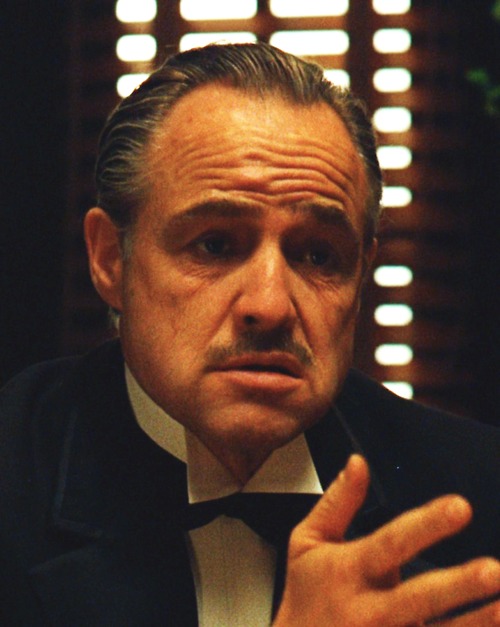 The best actor Oscar for his performance as Vito Corleone in The Godfather was an offer that Marlon Brando famously refused.

All in the crime family


Celebrating the birth of a new Hollywood


Credit him with knowing how to seize a moment. On this date (March 28) in 1973, headlines around the world noted his absence from the previous evening's Academy Awards show, where he'd won the best actor Oscar. Before an estimated 85 million viewers, a 26-year-old actress, who gave her name as Sacheen Littlefeather, stood at the podium to refuse, politely, "this very generous award." A performer who took his rebel reputation seriously, Brando understood that the grandly named Academy of Motion Picture Arts and Sciences was nothing more than a promotional vehicle for the film industry. Hollywood's chamber of commerce, it exists for no higher purpose than generating interest in, and ticket sales for, the movies made by its corporate patrons. Its annual awards broadcast is an evening-long advertisement, punctuated by even more advertisements. Understanding all of this, Brando attempted to make his share of the time a public-service announcement on behalf of a cause he believed in: native American empowerment. Oscar is a jealous god, though, and permits no deviation from the prescribed ritual. Littlefeather was not allowed to deliver the speech that Brando had written for her. Ever since, Academy rules have forbidden proxy acceptance of its awards. The unclaimed Oscar was for Brando's performance in Francis Ford Coppola's 1972 gangster epic, The Godfather.

Monday, March 27, 1972.
THE GODFATHER. Co-written by Mario Puzo, based on his novel. Music by Nino Rota. Co-written and directed by Francis Ford Coppola. Running time: 175 minutes. Restricted entertainment. THE LONG-AWAITED emergence of a "new Hollywood" is coming to pass. A pair of young directors, each with an outstanding current film to his credit, are making it happen.
Peter Bogdanovich, 32, and Francis Ford Coppola, also 32, are products of the post-war world. Their films, Bogdanovich's The Last Picture Show, and Coppola's The Godfather, are tales of mid-century maturation. Each has a sure feeling of time and each creates its own sense of authentic milieu.
Coppola's film opens in New York City, circa 1945. Based on the Mario Puzo best-seller, it focuses on the lonely rise to power of Italian-American ganglord Michael Corleone (Al Pacino), as he assumes the mantle of his father Don Vito, the godfather.
Michael is the Don's youngest son. He arrives at his sister Connie's (Talia Shire) wedding still dressed in his army uniform. As the youngest, he has benefited from, but takes no part in, the family business. His father hopes that he will achieve the ultimate respectability, that Michael will someday become governor, or perhaps a senator.
As his guests mingle, Don Vito (Marlon Brando) is adhering to an old Sicilian custom — that on his daughter's wedding day the proud patriarch can refuse no request. Because of the nature of the family business, most of the requests — a murder threat here, a double murder there —are darkly sinister.
While the Don is holding court, his guests are being entertained by crooner Johnny Fontane (Al Martino), darling of the bobby-sox set. Michael explains to his blonde, all-American girlfriend Kay Adams (Diane Keaton) that Fontane owes his career to the Don.
Years earlier, the singer was unable to exploit his popularity because he was under contract to an inflexible bandleader. Negotiating on his behalf, the Don had made the bandleader "an offer he couldn't refuse" — a phrase that will occur over and over again in the film — his life for Fontane's  release.
Kay is shocked. Michael assures her that he is not like his father. Unlike his brothers, he is not a part of the "business." The changing times, however, will soon bring the junior Corleone's family ties to the fore.
The crunch comes when the Don is approached by a consortium of crime families to join them in organizing the growing drug traffic, "a business of the future." Vito demurs. While he can regard gambling and prostitution as "harmless vice," he will have nothing to do with narcotics.
His recalcitrance makes him the target of a hit and, in the midst of the Christmas season, the old Don is gunned down in the street. His rivals have underestimated their man, though. Despite five serious bullet wounds, the Don survives, and his sons begin the grim job of vengeance that draws Michael to the centre of the family circle.
Except for Brando, Coppola has cast his film with virtual unknowns, making it difficult to decide whether the uniformly brilliant performances are the result of fine acting or inspired type-casting. Regardless, the effect is an ensemble of consistent, believable characters who bring a tightly crafted screenplay to life on the screen.
Hovering over it all is Brando. The usually over-rated method actor brings a sense of restraint and an almost sentimental warmth to the character of Don Vito.
With his jowls puffed out and his hair thinned, the 47-year-old actor mumbles even more than usual, but he still manages to infuse his role with remarkable authenticity.
The Godfather is a long film, clocking in at nearly three hours. It has more characters than an audience can comfortably keep straight.
It is the ultimate compliment to Coppola that his hugely ambitious gangster epic hardly seems that long in the theatre. As for its complex family tree, it's actually a pleasure to sort out.

Afterword: Wasn't that a time? By 1972, it was clear that motion pictures were undergoing some profound changes. In the years since, books such as Michael Pye and Linda Myles's The Movie Brats (How the Film Generation Took Over Hollywood; 1979) and Peter Biskind's Easy Riders, Raging Bulls (How the Sex-Drugs-And-Rock 'n' Roll Generation Saved Hollywood; 1995) have recalled the excitement from a distance. Reeling Back takes pleasure in offering my reports from the front lines as this new cinema arrived on Vancouver's theatre screens. (Although the above notice has been edited to focus on The Godfather, it originally included my review of Bogdanovich's The Last Picture Show. Both films opened on the same day.) During the rambunctious Academy Awards show mentioned earlier, The Godfather producer Albert S. Ruddy did accept the best picture Oscar, and Coppola collected the best adapted screenplay prize. Two years later, Coppola had an even better night, personally accepting a best picture, director and screenplay Oscar for The Godfather: Part II (1974). Although Brando was nominated twice more (in 1974 for Last Tango in Paris and 1990 for A Dry White Season), Academy voters weren't about to risk another snub by actually voting for him.