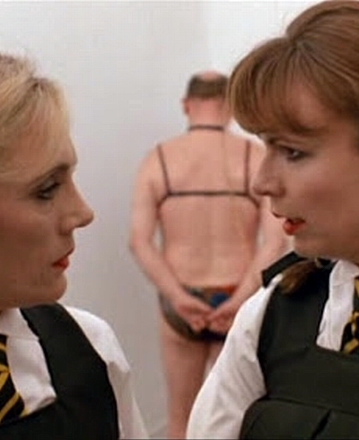 
The point of being old is being dirty


Much beloved of the Irish, Terry Jones was one sixth of the comedy collective known as Monty Python’s Flying Circus. Born on this day (February 1) in 1942, he directed three of its features before flying solo with his 1987 tale of a London tart, Personal Services.

PERSONAL SERVICES. Written by David Leland. Based on interviews with Cynthia Payne. Music by John Du Prez. Directed by Terry Jones. Running time: 105 minutes. Restricted entertainment with the B.C. Classifier's warning: frequent suggestive scenes, occasional very coarse language and nudity. CHRISTINE PAINTER (JULIE WALTERS) has news for her dad (Ewan Hooper). "Your daughter is a tart," she tells him with a mixture of rage and malicious glee, "on the game!”
A single mother and former lunch-counter waitress, Christine recently became self-employed. As she tells her father on the day of her sister's marriage to a police officer (no less!), she now offers Personal Services.
In Britain, readers of the popular press had no difficulty recognizing Christine. The character, they knew, was inspired by London's own happy hooker, upscale brothel manager Cynthia Payne.
Christine's story, says screenwriter David Leland, is true to “the spirit'' rather than the facts of the Payne saga. Unfortunately, it assumes that the filmgoer already knows all there is to know about the woman the tabloid headline writers dubbed ''Madame Cyn.”
What’s worse, in transforming Cyn’s “spirit” to the screen, director Terry Jones couldn't decide whether to play her story for comedy or as a social drama.
Best known as a Monty Pythonite, Jones offers a film that is little more than a series of loosely connected sketches. His picture depends more on insider knowledge than coherent character development.
The result is a mess, a nasty bit of goods in which absolutely everyone is an emotional cripple. Having observed that “most men don't like sex that much," Christine and her friend Shirley (Shirley Stelfox) decide to specialize in the needs of the elderly.
Such men, they discover, take pleasure in role-playing situations in which they are dominated, humiliated or allowed to cross-dress. Establishing themselves in a South London house, they become purveyors of prurient fantasies to those in the know.
''Dirty old sods, all of you,'' they tell the ''guests'' at their Christmas party.
''Wot's the point of being old if you can't be dirty?'' is the cheery reply. Beneath the forced joviality, though, Christine's world is a singularly ugly place populated by pathetic, disgusting men and calculating, disgusted women.
It's not very funny. (The comic-fantasy view of prostitution is far better done in Colin Higgins's 1982 musical, The Best Little Whorehouse in Texas.)
Nor is it particularly profound. (The best recent serious film about prostitution remains Lizzie Borden's 1986 docudrama Working Girls.)
Indeed, the best description of the whole vulgar package is offered by the desk sergeant who interrogates Christine following a police raid on her premises. “Wot a Carry On, eh?”

Afterword: Beloved of the Irish? After 1987, Terry Jones enjoyed telling interviewers that three of his first four films as a director were banned in Ireland. Though Dublin’s censors may have giggled at Jones’s debut feature, 1975’s Monty Python and the Holy Grail, they drew the line at his hilariously irreligious Monty Python’s Life of Brian (1979). Nor did they have any time for Monty Python’s Meaning of Life (perhaps because of Jones’s song “Every Sperm Is Sacred” that heckled Catholic Ireland’s official position on abortion and birth control). Personal Services, with its irreverent attitude to the sexual exploitation of dirty old men, gave Jones his Hibernian hat trick.