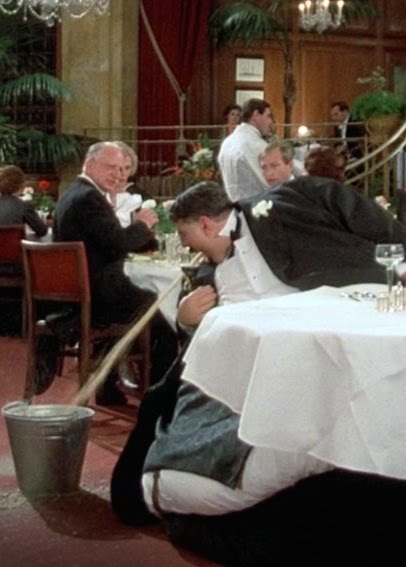 
The comedy collective known as Monty Python was a mixture of two Oxford grads, a trio from Cambridge and one American from the Midwest. Born on this day (February 1) in 1942, Terry Jones is the one who directed its movies, including 1983’s The Meaning of Life.

Wednesday, April 13, 1983.
MONTY PYTHON'S THE MEANING OF LIFE. Co-written by Graham Chapman, John Cleese, Eric Idle and Michael Palin. Music by John Du Prez. Co-written and directed by Terry Jones and Terry Gilliam (cartoon sequence). Running time: 103 minutes. Restricted entertainment  with the B.C. Classifier’s warning: some very coarse and suggestive language, occasional nudity. HAS SUCCESS SPOILED THE Python? Like Mel Brooks before them, the Python persons have gone sour. Like Brooks, the once lively and inventive comic collective is looking less and less funny.
I used to like Mel Brooks. His early film spoofs — 1974’s Blazing Saddles and Young Frankenstein (1975) — were full of inspired insanity. His debut feature, The Producers (1968) remains one of my all-time favourite comedies.
Somewhere along the way, though, Brooks lost me. As his budgets got bigger, his ideas about what was funny changed. His last effort, 1981’s History of the World, Part I, was witless tedium from beginning to end, a collection of vulgar sketches full of tasteless outrages rather than jokes.
I’ve always liked Monty Python. Since the release of its first feature, And Now for Something Completely Different (1972), I’ve enjoyed its mad visions.
More bookish than Brooks, the Python’s comedy was fresh, unexpected — “nobody expects the Spanish Inquisition” — and comfortably cerebral. Like The National Lampoon, the Python had a college education and a brash, undergraduate approach to manners and mores.
I suppose the lads — Graham Chapman, John Cleese, Terry Gilliam, Eric Idle, Terry Jones and Michael Palin — are just getting on. I suppose they were offered a lot of money to make Monty Python’s The Meaning of Life and, rather than turn it down, decided to follow Brooks’s example and toss together a loosely-themed anthology film.
The program consists of a short subject (called The Crimson Permanent Assurance, set off from the main movie by its own set of credits) and a seven-part feature that contains about 17 separate sketches and six musical numbers, one of them a cleverly animated cartoon called The Meaning of Life.
Overall, I get the impression that the Python is tired. The comedians who once dazzled us with their originality seem starved for inspiration here.
There are chunks of the movie borrowed whole from sources as diverse as Richard Lester’s How I Won the War (1967), Norman Jewison’s Jesus Christ Superstar  (1972) and British broadcasting’s Hitchhiker’s Guide to the Galaxy.
The comedians who once charmed us with their intelligence seem to have fallen prey to a Brooksian infatuation with bodily eruptions. Filmgoers prone to stomach upsets deserve to be warned about a restaurant scene in which much deference is paid to a Mr. Creosote (Terry Jones), a veritable volcano of vomitus.
Perhaps I expect too much of the Python. The film has one or two quite jolly moments — Eric Idle’s Galaxy Song among them — and Terry Gilliam’s animation is always worth the price of admission.
What I missed, though, were those moments of absolutely devastating hilarity that the Python used to squeeze out with such ease. That was before the lads became jaded and worn. Now, despite a pursuit of the outrageous, The Meaning of Life never manages to be more than mildly amusing.

Afterword: As should be obvious from my previous review postings, I can take an outrageous joke. Overall, I agree with Laurence Olivier, who once said something like “a well-timed fart can be funnier than the wittiest line that Oscar Wilde ever wrote.” Timing, of course, is everything, and Monty Python’s Flying Circus appeared at a moment — 1969 to 1974 — when the Baby Boomers were graduating college with just enough education to appreciate the collective’s transgressive common-room comedy. After the TV sketch anthology, And Now for Something Completely Different (1971), its first two feature films — 1974’s Monty Python and the Holy Grail and Monty Python’s Life of Brian (1979) — were great moments in comedic art. Though collectively written, both films were directed by Terry Jones, who met Michael Palin during his time at Oxford. Graham Chapman, John Cleese and Eric Idle were Cambridge grads. They all came together with American animator Terry Gilliam at the British Broadcasting Corporation, where the timing was right for an an explosion of outrageous wit.
When the Flying Circus folded its tent, its creators pursued separate interests and careers, often coming together to collaborate on one another’s projects. Following The Meaning of Life, Jones wrote the original screenplay for Jim Henson’s 1986 fantasy Labyrinth. He returned to directing with an adult comedy, 1987’s Personal Services, and the Pythonesque fantasy Erik the Viking (1989). In 1996, he wrote and directed a live action adaptation of the Kenneth Grahame’s classic children’s novel The Wind in the Willows (released in the U.S. as Mr. Toad’s Wild Ride). His most recent movie, 2015’s Absolutely Anything was a sci-fi comedy, Though it starred Simon Pegg and Kate Beckinsale, it was actually a Python reunion, bringing together Jones with all of his old colleagues. (The exception was Chapman, who died in 1989.) Terry Jones turns 75 today (February 1).