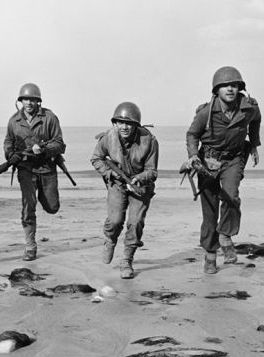 A day storming the beach


Today’s memories brought to you by the letter D


It was a moment that changed history. On this day (June 6) in 1813, an American invasion force came under attack in what the chroniclers call The Battle of Stoney Creek. Celebrated in story and song, it was the turning point in the war for Upper Canada, a great victory for the British and a rebuke to Thomas Jefferson’s belief that acquiring Canada would be “a mere matter of marching.” U.S. military historians are more likely to recall that it was on this day in 1918, during the First World War’s Battle of Belleau Wood, that the U.S. Marine Corps suffered its worst single day of casualties in an assault on Château-Thierry. Counted as a victory, the engagement is remembered as a key moment in Corps lore. Nor can we forget that on this day in 1942 the Second World War’s Battle of Midway concluded with U.S. Navy dive bombers sinking the Japanese cruiser Mikuma as well as four aircraft carriers. Recorded as a great victory for the Americans, it was the turning point in the Pacific War. Crafting an historical narrative is a political act, something I learned from George Orwell, whose dystopian novel Nineteen Eighty-four was published on this day in 1949. Which brings us to a movie that changed history in its telling of the story of the Second World War’s Operation Overlord, the Allied invasion of Normandy that took place on this day in 1944. Perhaps still smarting over the beating the U.S. took at Stoney Creek, producer Darryl F. Zanuck completely ignored Canada’s contribution to the landing’s success in his 1962 feature The Longest Day.

THE LONGEST DAY. Written by Cornelius Ryan, based on his 1959 book. Music by Paul Anka and Maurice Jarre. Directed by Ken Annakin, Andrew Marton and Bernhard Wicki. Running time: 178 minutes. AT EASE.
As you are aware, we are well into the final phase of Operation Overload, the selling of D-Day. The massive media blitz has convinced almost everyone that the Normandy landing was the single most significant event since creation.
Once again, we see how easily reality and remembrance can be shaped into a mass-market commodity. In a way, today's 50th anniversary celebration [1994] is a tribute to the original Overlord entrepreneur, lieutenant-colonel Darryl Francis Zanuck.
The last of the Hollywood studio moguls, Zanuck received his reserve army commission in 1940. During the Second World War, he was the film industry's propaganda czar, responsible for coordinating the production of military training films.
In 1960, the aging battle buff announced plans to make a movie out of reporter Cornelius Ryan's 1959 book The Longest Day, an anecdotal account of the invasion. Billed as a tribute to the fighting men on both sides of the battle line, its cast included every male star that Zanuck's money and patriotic bluster could buy.
Released in 1962, The Longest Day was a three-hour-long throwback to the prop-art of the war years. An encyclopedic collection of service film cliches and national stereotypes, the picture carpet-bombed its subject and its audience into limp submission before Zanuck's revisionist version of history.
A businessman, producer Zanuck was less interested in historic accuracy than Hollywood economics. Shot on various European locations, The Longest Day benefited from the cooperation of the French military. In return, the French were accorded screen time out of all proportion to their historic participation in the June 6th operation.
Though the U.S. charges for the use of its soldiers as dress extras, the French came free. Movie trivia fans will delight in the knowledge that the French forces involved in this recreation of D-Day exceeded the number who actually participated in the event by a factor of 10.
On television today [1994], The Longest Day should be called Operation Oversight. Though 14,000 Canadians took part in the actual invasion, they're nowhere to be seen in Zanuck's mighty epic.
Though Canadian forces secured one of the five target beaches (Juno), their contribution was written out of the movie's history. In their place is a sequence honouring the Free French, a token unit of 172 commandos who landed with the Brits on Beach Sword.
In 1962 Zanuck offered the public his own D-Day fantasy, and insisted on calling it "history." Filmgoers who prefer their fiction straight up know that the great hero of Operation Overlord was played by James Garner.
Twice.
In director Arthur Hiller's own favourite film, The Americanization of Emily (1964), Garner plays Charles Madison, a roguish American naval officer who is assigned the task of filming D-Day's first U.S. death. As written by Paddy Chayefsky, the film is an anti-war tract, full of cynicism about military establishments.
The title character is played by Julie Andrews. The picture combines wartime romance with satirical comedy to make some telling points about the Zanucks of the world.
A year later, in director George Seaton's 1965 suspense thriller 36 Hours, Garner plays Jefferson Pike, a dedicated army intelligence officer with knowledge of the Allied invasion plan. Drugged and kidnapped by Nazi spies, he wakes up in what appears to be an American veterans' hospital.
It's now 1950, his kindly doctor (Rod Taylor) insists. Try to recover your lost memory. Tell us everything you remember.
Filmgoers in search of some genuine historical balance will appreciate the Ridge Theatre's current attraction, Stalingrad. Bavarian director Joseph Vilsmaier's 1993 feature marks the 50th anniversary of the Soviet victory that was the real turning point in the war and the beginning of the end for Nazi Germany.
Filmed in Czechoslovakia, it focuses on four rangers, members of the German Sixth Army that spent the winter of 1942-43 besieging the Russian city. In German with English subtitles, Vilsmaier's drama is that most remarkable thing, a film made not about a victory, but to shed light on a defeat.
Stalingrad, on view tonight and Tuesday, is worth serious attention.

The above is a restored version of a Province review-rant by Michael Walsh originally published in 1994. For additional information on this archived material, please visit my FAQ.

Afterword: In all fairness, Darryl Zanuck’s celebration of American exceptionalism is not without some significant Canadian content. Ottawa-born Paul Anka was one of several pop stars hired to play U.S. Army Rangers, an attempt by the casting department to add some teen appeal to the production. Although Zanuck’s original concept did not include music, the 20-year-old Anka had a melody in his head. In the 2009 inspirational anthology Chicken Soup for the Soul: The Story Behind the Song, he recalls recording “a demo at my own expense” and sending it to the producer. Apparently Zanuck liked what he heard, because Anka’s theme and lyrics made it into the final film, adding a film score credit to the young Canadian’s resumé. (When the the Canadian Airborne Regiment was formed in 1968, it repatriated Anka’s Longest Day Theme as its official march.)
Although it offers no source for its information, the IMDb includes among its Longest Day Trivia the statement that Dwight D. Eisenhower, the Allied Supreme Commander in Europe and the architect of Operation Overlord, “walked out on the film after only a few minutes, frustrated by the inaccuracies.” (One more reason to like Ike.) To the best my knowledge, the Battle of Stoney Creek has never been celebrated on the silver screen. Not so the Battle of Belleau Wood, the subject of a silent feature, The Devil Dogs at Belleau Wood, released in 1919. The Battle of Midway, of course, got the epic treatment in 1976. Presented in the theatre-rattling Sensurround process, director Jack Smight’s Midway starred Charlton Heston and Henry Fonda. And, not unexpectedly, director Michael Radford’s perfectly splendid adaptation of Nineteen Eighty-Four  arrived in (when else?) 1984.