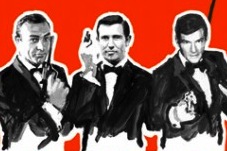 A spy for all seasons


When there were but three


In 1980, when there were only a dozen James Bond features to choose among, it was easy to know everything there was to know about the screen's most popular superspy. Reeling Back invites you to test your recollection of those simpler times with this film quiz.

BEFORE 1962, JAMES BOND was a literary phenomenon. Author Ian Fleming had already written nine books about his British secret agent before 007 came to the screen. Numbered among his readers was the American president, John F. Kennedy.
Since 1962, Bond has been a movie phenomenon. So far there have been 11 feature films in the "official" series of James Bond movie adaptations.
Now [December 1980], in an effort to generate a little pre-Christmas cheer, Canadian Odeon Theatres is programming eight days of 007 films, a Bond-anza event that includes 10 of the 11 "official" features. Before this major Bond market opens, filmgoers may want to check their recollection of some of the fundamental facts with this quiz.

10.     In 1967, Columbia Pictures released an "unofficial" Bond feature, a film not  part of the canonical United Artists franchise. A manic spoof, it brought together five directors, and featured David Niven as Sir James Bond. What was it called?

3.     Smyert Spionam (or, Death to Spies), is the Soviet counter-espionage agency in the Bond universe.

5.     Special Executive for Counter Terrorism, Revenge and Extortion. They're the bad guys.

6.     Charles Gray (Diamonds Are Forever), Donald Pleasence (You Only Live Twice) and Telly Savalas (On Her Majesty's Secret Service) all played Blofeld. Gert Frobe and Christopher Lee had the title roles in Goldfinger (Auric Goldfinger) and The Man With the Golden Gun (Scaramanga).

10.     Casino Royale, based on the one Fleming novel for which producers Harry Saltzman and Albert Broccoli did not have the screen rights.

The above is a restored version of a Province movie quiz by Michael Walsh originally published in 1980. For additional information on this archived material, please visit my FAQ.

More Bond: In 1983, Sean Connery returned for one more go around as 007 in the second (and last) non-series Bond feature, Never Say Never Again LINK.