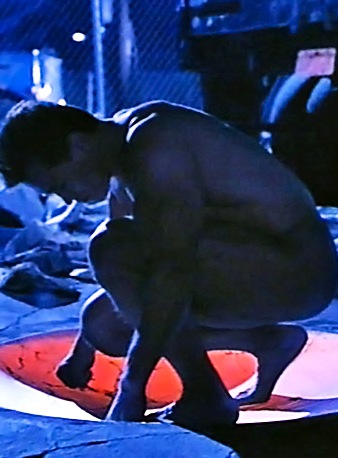 A birthday-suited T-800 Model 101 (Arnold Schwarzenegger) makes his entrance, arriving on a mission of death in writer-director James Cameron's The Terminator (1984).

A storm coming in


Blame Canada. There are those who will tell you that Arnold Schwarzenegger, who was born on this day (July 30) in 1947, owes his success in the movies to Canadians. His acting ambitions notwithstanding, the Austrian-accented bodybuilder spent the first 10 years of his film career playing bodybuilders who spoke with an accent. The four-time Mr. Universe winner made his strongest impression as "Mr. Austria" Joe Santo in director Bob Rafelson's Stay Hungry (1976). Though he had the title role in two Conan pictures (1982 and 1984), it was Canada's James Cameron who gave him his breakthrough role in 1984's The Terminator. After playing Cameron's surprisingly nuanced killer robot, he was taken seriously as an action-adventure star. It was another Canadian, Ivan Reitman, who gave him the chance to demonstrate his comic abilities. Their three films together — 1988's Twins, Kindergarten Cop (1990), and Junior (1994) — humanized Schwarzenegger and (arguably) helped win him his most striking comic role, a term and a half as the Governor of California. He won that part (often referred to as "the Governator") during the recall election of 2003, and was renewed in the regularly scheduled election of 2006. Since that series ended in 2011, he's been back making feature films.

Thursday, October 25, 1984
THE TERMINATOR. Co-written and produced by Gale Anne Hurd. Music by Brad Fiedel. Co-written and directed by James Cameron. Running time: 110 minutes. Restricted entertainment with the B.C. Classifier's warning: frequent brutal violence, very coarse language. JUST MINUTES AGO, Sarah Connor (Linda Hamilton) was convinced that the intense, disheveled young man was a homicidal maniac.
Things, as it happens, are worse.
Much worse.
His name is Kyle Reese (Michael Biehn). "I've been assigned to protect you,'' he says. "You've been targeted for termination.''
Just minutes ago, Sarah was sitting in a crowded nightclub when a huge man (Arnold Schwarzenegger) aimed a gun at her. As she watched, the huge man was felled by her protector's shotgun. As she watched, he absorbed shot after shot. As she watched, he got up again in his determination to kill her.
''It can't be reasoned with . . .'' Reese says.
''It'' is a Cyberdyne Systems Model T-800 101, a robot assassin called The Terminator. ''It absolutely will not  stop, ever, until you are dead.''
A few years ago, writer/director James Cameron worked for Roger Corman, picking up credits for art direction and special effects cinematography. In the process, he got to write and direct an exploitation film sequel, Piranha II: The Spawning.
Now he emerges as his own man, with a high-voltage science-fiction feature that combines Mad Max-style thrills with Halloween chills.
Cameron's Terminator comes from a post-nuclear-holocaust future in which man's machines have turned upon him. In an effort to eliminate John Connor, the most effective of the surviving human leaders, the machine masters send CSM T-800 back through time with orders to kill Sarah, John's mother-to-be.
Reese follows moments later.
Cameron has designed a picture for the Clint Eastwood/Charles Bronson audience, and introduces us to a non-heroic Arnold (Conan the Barbarian) Schwarzenegger.
By casting the muscleman actor as a robot, he appeals to both the folk who disparage Big Arnie, and those who respond favourably to his granitic presence.
Mounted with pace and style, The Terminator is a non-stop battle between high tech and low cunning. A director who leavens his mix with moments of deliberate humour, the Canadian-born Cameron may soon be hearing himself compared to such modern mayhem masters as John Carpenter and George Romero.

Afterword: As it turned out, James Cameron's second directorial assignment proved to be something more than a routine sci-fi adventure. Hollywood recognized his potential; his third and fourth films were the big-budget Alien sequel, Aliens (1986), and the underwater epic The Abyss (1989). His association with Arnold Schwarzenegger continued with Terminator 2: Judgment Day (1991), and the adventure romance True Lies (1994). True respect came his way as a result of his 1997 historical romance, Titanic, the winner of a record 11 Academy Awards (including best picture and direction Oscars to Cameron). It became the top-grossing movie of all time, a title it held until 2009. The movie that bumped Titanic into second place was the sci-fi fantasy Avatar, a picture written, produced and directed by James Cameron.There were third and fourth Terminator pictures, neither written or directed by Cameron. Schwarzenegger was back to battle a killer fembot in Terminator 3: Rise of the Machines (2003), but was busy in Sacramento during the making of the quite awful Terminator Salvation (2009).  A genuine bright spot among later Terminator spin-offs was the two-season television series Terminator: The Sarah Connor Chronicles (2008-2009). British actress Lena Headey, as single mom Sarah, co-starred with Joss Whedon alumna Summer Glau, as John Connor's guardian T-OK715 fembot, who just happens to go by the name of Cameron. Perhaps the most obscure bit of Terminator trivia concerns the official paperback tie-in novel issued at the time of the film's release. Britons were offered The Terminator, "a novel by Shaun Hutson," an adaptation of 172 pages. In the U.S.,the story of The Terminator, "a novel by Randall Frakes and Bill Wisher," required 240 pages to tell. Both works were "based on the screenplay by James Cameron with Gale Anne Hurd."