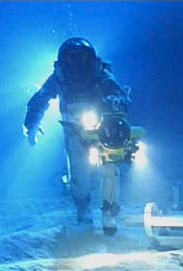 The fate of the world hangs in the balance as deep sea diver Virgil "Bud" Brigman (Ed Harris) navigates The Abyss.


Cameron's first voyage to the bottom of the sea


As director James Cameron knows well, it was on this day (Jan. 23) in 1960 that a Swiss scientist named Jacques Piccard set the record for the deepest ocean dive. Together with U.S. Navy Lieutenant Don Walsh, Piccard descended 10,912 metres (35,800 feet) into the deepest place on the surface of the Earth's crust, the Challenger Deep in the Pacific Ocean's Mariana Trench. They spent about 20 minutes on the ocean floor in a bathyscaphe called the Trieste. The Canadian-born Cameron knows this because, on March 26, 2012, he came close to breaking their record. In partnership with the National Geographic Society, he made his solo descent aboard the Deepsea Challenger, reaching a recorded depth of 10,898.4 metres (35,756 feet). Though most of the world knows Cameron as a filmmaker, his passion for exploration has won the respect of the scientific community. Not only did he make 1997's Titanic (the top-grossing film of all time, until Cameron released his 2009 feature Avatar, the current top-grossing film of all time), but he has visited its resting place on the floor of the Atlantic more than 30 times. While we wait for his documentary Deepsea Challenge 3D, due for release this year, Reeling Back recalls his first underwater epic, 1989's The Abyss.

Wednesday, August 9, 1989
THE ABYSS. Music by Alan Silvestri. Written and directed by James Cameron. Running time: 139 minutes. 14 years Limited Admission with the B.C. Classifier’s warning: some coarse language and occasional violence. THE ROUGHNECKS ARE restless. Ever since the navy divers came aboard Deepcore, Benthic Petroleum’s undersea drilling rig, anxiety has been an element in their breathing mixture.
“These SEALs ain’t telling us diddly’,” says Hippy (Todd Graff), a civilian crewman pressed into service when the nuclear submarine USS Montana goes down on the edge of the Cayman Trough in the Caribbean Sea.
“Hippy,” says another crewman, “you think everything is a conspiracy.”
“It is!”
Audiences are getting restive. There’s a new game in Hollywood and filmgoers are suffering from déjà vu as a consequence.
Called “Share the Plot,” it requires four or more directors and a one-line plot synopsis.
Last year’s storyline read “A boy’s mind becomes trapped in a man’s body.” Made as a result were Like Father, Like Son (1987), Vice Versa, 18 Again and Big (all 1988).
This year’s line: “Undersea workers find something scary.” Involved in this round of play are Sean (Friday the 13th) Cunningham, George (Rambo) Cosmatos, James (Aliens) Cameron and a rookie, Mary Ann Fisher.
Anticipating Cameron, the others all set about remaking Alien underwater. First into the theatres was Cunningham, with something resembling 1966’s The Navy vs the Night Monsters.
Released in January, his predictable Deepstar Six has the builders of a seabed missile site disturbing some murderous mollusks. Miguel (Robocop) Ferrer and Marius (The Gods Must Be Crazy) Weyers were the big names in Cunningham’s cast.
Cosmatos did better with Leviathan, seen in March. Peter (Robocop) Weller, Amanda (Max Headroom) Pays and Richard (Rambo) Crenna made his expected Alien rerun unexpectedly watchable.
Fisher’s Lords of the Deep, produced by Roger Corman, was a May release in the U.S.  Savaged by the American critics, it has yet to surface here.
Now, you ask, can the kid from Kapuskasing convince us that it’s worth going back into the water?
The answer is that they saved the best for last.
Just when we thought there was nothing new under the sea, the Canadian-born Cameron invites us into The Abyss, the most breathtaking submarine drama since Disney’s 1954 classic 20,000 Leagues Under the Sea.
A former special-effects director, Cameron knows the value of an authentic look.
If the submersibles in his picture look fully functional, it’s because they are. Technical assistance as well as working hardware was supplied by North Vancouver’s Can-Dive Services, a world-class manufacturer of deep-sea vehicles.
Complementing the equipment is a cast that looks at home in working gear. Ed Harris (best known for his portrayal of John Glenn in The Right Stuff), plays Virgil “Bud” Brigman, leader of the Deepcore team, a group with the rough camaraderie of Aliens’  Colonial Marine Corps.
As written by Cameron, the film’s various conflicts manage to ring true as well. Instead of a cliché romantic subplot, he offers us domestic strife.
Brigman is being divorced by his wife Lindsey (Mary Elizabeth Mastrantonio), the engineer who designed the Deepcore facility. She’s dispatched along with the Navy’s SEALs because “nobody knows the systems in the rig better.”
A suspense thriller that turns on the dangers of the deep, The Abyss contains its own unknowns, referred to as “Non-Terrestrial Intelligences” (NTIs). Here, though, the intentions of the sea-dwellers are part of the mystery.
In an attempt to out-Speilberg Speilberg, Cameron moves in a new direction, one that keeps us involved, holding our breath and guessing to the end.

Afterword: By now, James Cameron's passion for diving is well known. Recently, he made it known that he also feels strongly about the environment. In September 2010, following the phenomenal success of his green-themed science-fiction fantasy Avatar, he visited Alberta's tar sands. In subsequent interviews, he was quoted as saying the oil extraction project was Canada's "black eye" and "will be a curse if it's not managed properly." Though his public words are measured, his screen creations suggest that dire consequences follow from under-regulating corporate activities. Think about the origins of The Terminator's Skynet, or the real reason the Weyland-Yutani Company sends Ellen Ripley back to LV-426 to battle Aliens. A writer who trades in dark secrets, Cameron was the creator of the two-season TV series Dark Angel (2000-02), a tale of genetically-modified runaways at large in a post-apocalyptic Pacific Northwest (filmed, of course, in Vancouver). A Canadian who remains a citizen of his home and native land, Cameron is one we can be proud of.