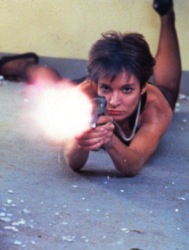 
Opening today (July 25), Luc Besson's Lucy is the French writer-director's 16th feature film. A sci-fi fantasy, it stars Scarlett Johansson as an Asian mob's drug mule, who receives an accidental brain boost that gives her goddess-like powers. As we look forward to James Cameron's announced adaptation of the Yukito Kishiro manga Battle Angel Alita, it's hard not to imagine the two filmmakers as brothers separated at birth. Both men started out as action film directors, Besson with the post-apocalyptic Le Dernier Combat (1983), Cameron with Piranha II: The Spawning (1982). Both have celebrated their love of the world's oceans in dramatic and documentary films. Besson's include Le Grand Bleu (1988) and Atlantis (1991), while Cameron has offered The Abyss (1989) and Aliens of the Deep (2005). Cameron's science fiction is distinguished by its strong women, such as Sarah Connor (The Terminator; 1984) and Ellen Ripley (Aliens; 1986). Besson has shown his respect for such real-life heroines as Burma's Aung San Suu Kyi (The Lady; 2011) and Joan of Arc (The Messenger; 1999). And, of course, he is the creator of such classic power girls as Leeloo (The Fifth Element; 1997) and La Femme Nikita (1990).

Friday, March 29, 1991.
LA FEMME NIKITA. Music by Eric Serra. Written and directed by Luc Besson. Running time: 115 minutes. Restricted entertainment in French with English subtitles. B.C. Classifier's warning: some violence and very coarse language. SHE IS SELF-DESTRUCTIVE. The question is "how much so?"
When we first see La Femme Nikita (Anne Parillaud), she's being dragged along a rain-soaked Paris street. A limp, unresisting punkette, she's being towed through the night by Zap (Alain Lathiere), a long-haired lad with a prognathous look and a red fireman's axe.
As it turns out, dull-eyed Zap means her no immediate harm. His total attention is fixed upon the contents of the drug locker in the pharmacy at the end of the street.
Together with his three armed and demented mates, Zap breaks into the shop with single-minded fury. "I need it," Nikita whimpers piteously.
Having established the essential characters, situation and setting, writer-director Luc Besson proceeds to the heart of the matter. Or, as they say in the comic books, "it's clobberin' time."
The pharmacist appears, armed and prepared to defend his turf. The police arrive within moments, armed and prepared to restore order with extreme prejudice.
An inordinate expenditure of ordnance later, spaced out Nikita looks about and murmurs "none left?"
HE is self-indulgent. Luc Besson, the French Ridley Scott, is a graduate of the style-over-substance school of filmmaking.
A comic-book buff rather than a classic movie fan, he admits that "comics have a certain influence over my approach to narrative. I want to make things happen bam-bam-bam, no introduction, no explanation."
Besson likes simple, highly visual ideas. Intrigued by the look of the Paris Metro, he dashed off the story of a man on the run, then went underground to shoot Subway (1985).
Taken with the look of the Mediterranean coast, he went underwater to make The Big Blue (1988). A loony-tunes tale of a sport called competition free diving, it introduced audiences to contests in which the participants hold their breath for extended periods of time.
With La Femme Nikita, Besson goes undercover with the bam-bam-bam story of a bad girl recruited to do the Fifth Republic's wet work. Sentenced to life imprisonment for her part in that drugstore massacre, Nikita "dies" and is buried, only to wake up in the care of a man in black named Bob (Tcheky Karyo).
Patiently, he explains her situation and what she must do in her "afterlife."
"Learn," he says. " . . . serve your country."
"What if I don't want to?"
"Row eight, plot 30," Bob says, pointing to a photo of her officially marked gravesite. Nikita is not that self-destructive,
Besson, unfortunately, is that self-indulgent. Like an anti-social kid who's overdosed on too many La Demoiselle d'O.N.C.L.E. episodes, he's created an underwhelming fantasy of improbable selection and nihilist adventure.
Though a touch too old for the role of a 19-year-old spalpeen, actress Parillaud worked hard to create a Jamie Lee Curtis-like presence. As an example of bam-bam-bam action, assassin Nikita's maiden mission is first-rate.
Too bad the scene isn't part of something more than a B-brained, 1960's-style feature.

Afterword: "Never underestimate the power of a woman," the Ladies' Home Journal told us back in 1941. As it turns out, Besson's action heroine has had more than one "afterlife." In 1993, her story inspired an American remake called Point of No Return. Directed by John Badham, it's a U.S. version in which Bridget Fonda is recruited by Gabriel Byrne to kill for her country. Less well known is an earlier Hong Kong remake, the Chinese-language Hei mao (Black Cat; 1991). Shot on location in Vancouver and New York City, it stars Jade Leung in the title role, a lethal lady with a talent for martial arts mayhem. Nikita's next incarnation was in the five-season cable-TV series Nikita  (aka La Femme Nikita in the U.S.; 1997-2001). Shot in Toronto with cool, blonde Australian actress Peta Wilson in the title role, the show developed a cult following and was the focus of its own fan conventions. The concept was rebooted nine years later for the CW network. Though Hawaiian-born actress Maggie Q gave Nikita an exotic new look, reliable old Toronto remained the show's home base during a four-season run (2010-13). As for my 1991 dismissal of Besson, Nikita's creator, I have to say that my respect for his talent has grown over the years. I'm actually looking forward to Lucy.

See also: My review of James Cameron's 1989 feature The Abyss.