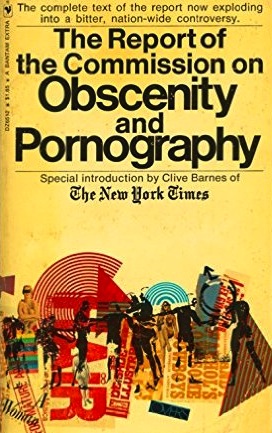 The Bantam Books paperback edition of The Report of the Commission on Obscenity and Pornography contained findings "categorically" rejected by then-President Richard Nixon.


Among the exhibitors at last weekend's Vancouver Comic Arts Festival (May 21-22) was Robin Bougie, editor and publisher of Cinema Sewer, a film journal that enthusiastically champions exploitation, cult and adult movies. This weekend (May 27-29), he'll be in London, Ontario, participating in Shock Stock, the fan gathering that bills itself as "Canada's Horror and Exploitation Celebration." A comic artist and a movie historian, Bougie is at ease in both communities. Active since the early 1990s, he's established himself as an important gonzo journalist. Bougie chronicles marginal movie genres with a unique, personal style. His best work is a mixture of Robert Crumb and Hunter Thompson, with a major focus on the alternative entertainment industry that creates and markets pornography. An American pop culture phenomenon since the late 1960s, porn became an issue when technology and shifting social attitudes challenged established puritanical practice. The triple-X reality that emerged — one that Bougie continues to record — was the unintended consequence of the work of a remarkable individual named William B. Lockhart, a man called upon by his president to sort out "a matter of national concern." Born on this day (May 25) in 1906, Lockhart chaired the 18-person panel that produced the landmark document in the debate, The Report of the Commission on Obscenity and Pornography (1970).

The above is a restored version of a Province review by Michael Walsh originally published in 1971. For additional information on this archived material, please visit my FAQ.

Afterword: Born in Des Moines, Iowa in 1906, William Bailey Lockhart was an ordained minister when he graduated from Harvard's law school in 1933. In the early 1960s, he was among the constitutional scholars called on by John F. Kennedy to advise the young president on civil rights legislation. Lockhart had been dean of the University of Minnesota School of Law for 10 years when, in January 1968, Lyndon Johnson appointed him to serve as the chairman of the President's Commission on Obscenity and Pornography. Johnson's March 1968 decision not to run for re-election meant that the commission's final report was delivered to his successor, Richard Nixon, who "categorically" rejected its findings in an October 1968 speech, branding the report "morally bankrupt." Asked for his reaction by the Harvard Crimson newspaper, Lockhart said "it is unfortunate that his advisors have led him to repeat the tired arguments of the past, based on assumptions, guesses, and fears without scientific backing," adding that "our task was not to arrive at the conclusions the administration holds, but to make scientific studies of pornography."
U.S. senators followed their president's lead, rejecting the report by a 60 to five vote (with 34 abstentions). The legal issue — a U.S. Supreme Court ruling that citizens had the right to view whatever they wished in the privacy of their own homes — remained, and American entrepreneurs  spread that First Amendment umbrella over what has become a multibillion-dollar business. The divisive controversy also remained. In 1985, President Ronald Reagan set up his own commission of inquiry under his Attorney General Edwin Meese. Like Reagan's other great idea, the Strategic Defense Initiative, the 1986 Meese Report was more fiction than science, and it's remembered for its risible attempts to sound academic while recycling the rhetoric of America's religious right. Around the same time, headline writers were reintroducing newspaper readers to Charles Keating Jr., the anti-porn crusader and dissenting commissioner mentioned in my review of the 1970 report. At the time, the U.S. was going through the multibillion-dollar financial meltdown known as the savings-and-loan crisis. Keating, by then an Arizona banker, faced charges of fraud, racketeering and conspiracy and, in 1993, he was sentenced to 12½ years in prison.
Bill Lockhart, by contrast, followed his service as commission chairman with 20 years as professor of Constitutional Law at the University of California. We can only guess how different our popular culture and sexual mores might be today, had the sensible, science-based recommendations contained in his report been accepted. He retired in 1994 at the age of 88, and died a year later. Today (May 25) is the 110th anniversary of his birth.

See also: In 1981, the National Film Board of Canada had a major popular success with its feature documentary Not a Love Story: A Film about Pornography, a look at the "problem" that channeled the attitudes of the Meese rather than the Lockhart inquiry.