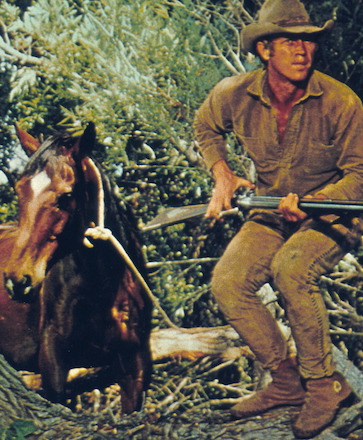 Lacking a meaningful relationship, the horse is indifferent to the plight of his rider in director Henry Hathaway’s 1966 Western epic Nevada Smith.


According to his 1997 obituary in The Independent, a London-based newspaper, “Harold Robbins was indisputedly the most popular writer in the world, and his books — not one of which has ever been out of print — are said to have sold, in 42 countries, three-quarters of a billion copies. His most popular, The Carpetbaggers (1961), has sold 30 million copies, making it, apparently, the fourth most read book in history.” Born on this day (May 21) in 1916, Robbins enjoyed fame as “the Rembrandt of the trashy novel,” “the Onassis of supermarket literature,” “the dirty old man of American letters” and “a tabloid Boswell.” The online Britannica credits him “with popularizing a prurient style of mass-market fiction that traded on the public appetite for tales of profligate Hollywood stars and glamorous criminals.” At the height of his fame, he assured interviewers “I'm the world's best writer in basic English. Everybody understands what I write — except maybe the critics." Fame, alas, is fleeting. His centenary in 2016 went unmarked. There were no celebrations, no academic conferences, no festivals of the 10 feature films based on his novels. Today’s Reeling Back package adds three of those pictures to the archive (with links to them all following the Afterword to this posting). Included is director Henry Hathaway’s Western epic based on a Robbins Carpetbaggers character, 1966’s Nevada Smith.

NEVADA SMITH. Written by John Michael Hayes, based on the 1961 novel The Carpetbaggers by Harold Robbins. Music by Alfred Newman. Directed by Henry Hathaway. Running time: 131 minutes. NEVADA SMITH PROBABLY WOULD have merited no better distribution than as the bottom half of a double feature, were it not for the fact that its central character figured largely in Harold Robbins’s "big, bold novel" The Carpetbaggers.
Robbins, America's best-selling pornograph recording star, created in Smith a great gland of a man driven by insatiable appetites — ever present was an immediate hunger for women and a long-term thirst after vengeance.
His life was one of pursuit, and its story formed the most brutal and prurient subplot of the 1961 best-seller.
John Michael Hayes’s script has eliminated or rewritten every one of Robbins's carefully contrived, shock-inducing scenes of vulgarity, sadism and eroticism. Without such supports the author's tale collapses in upon itself, a Pablum-thin, substandard western.
Major contributor to the whole whitewash job is Steve McQueen in the title role. His James Stewart-style Smith is, as tradition demands, far luckier than he is bright, and "aw shucks" diffident to all of the irritatingly apple-cheeked cute girls who cross his haphazard path.
Nevada Smith, the film and the man, is a tragedy. As he rides off into the sunset, alone, friendless and with a price on his head, the pathos of the uncommunicative, heroic renegade comes fully home to us.
He has failed even to develop a meaningful relationship with his horse.

The above is a restored version of a Toronto Varsity review by Michael Walsh originally published in 1966. For additional information on this archived material, please visit my FAQ.

Afterword: Apologies are in order. Describing Harold Robbins as “America's best-selling pornograph recording star” was definitely a linguistic misfire, a failed attempt at wit from a college kid — theVarsity was the University of Toronto's campus newspaper — not quite ready for critical prime time. And now, 56 years on, we’re living in a time when the word “phonograph” is hardly used at all, and anyone with an Internet connection can turn his computer into a “pornograph.” Word play, of course,  remains a consistent reminder of what a wonderful toy language can be.
The above brief review is also a reminder of how familiar 1960s college students were expected to be with Robbins, and his most famous work. A roman á clef supposedly based on the life of billionaire Howard Hughes, The Carpetbaggers introduced Max Sand (a.k.a. Nevada Smith) as the main character’s surrogate father, a man with a past in the 1890s American West. Smith’s origin story was told in the 1966 feature, among the last Westerns directed by legendary filmmaker Henry Hathaway.
Both Robbins and the picture’s star Steve McQueen were at the height of their popularity back then. In a 2019 Hollywood Reporter feature headlined “Revisiting Harold Robbins, the Forgotten ‘Dirty Old Man of American Letters’,” Michael Callahan recalls that the actor “starred in two Robbins adaptations, 1958’s Never Love a Stranger (as a blond Jew, no less) and 1966’s Nevada Smith (as a blond half-breed, no less).” Though McQueen was for a time the world’s highest-paid film star, Callahan’s remark was less a tribute to the blond actor’s versatility than Hollywood’s indifference to authenticity when casting mega-budget movies.
While we’re on the subject of fleeting fame, we’ve reached the point when, on hearing the name Steve McQueen, the current generation of filmgoers are as likely to picture the London-born director of 12 Years a Slave. The English McQueen's historical drama won the 2013 Best Picture Academy Award. In 2020, he was knighted by Her Majesty Elizabeth II “for services to film.”  Sir Steve is not a blond.