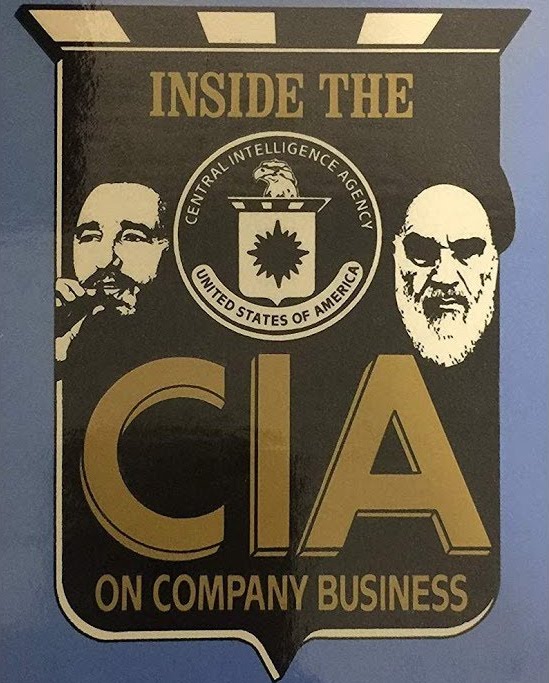 Another day at the office


Today (March 18), on his first visit to the U.S., Brazil’s President Jair Bolsonaro was received at CIA headquarters. Conferring with foreign leaders is all in a day’s work for the agency, something we learned from director Allan Francovich’s 1980 documentary On Company Business.

ON COMPANY BUSINESS. Musical advisor: Morton Marks. Written and directed by Allan Francovich. Running time: 174 minutes. "EXTREMISM IN THE DEFENSE of liberty is no vice," the candidate said. U.S. Senator Barry Goldwater wanted to be president. Unfortunately, he misunderstood the mood of the electorate.
Instead of creating a rallying cry that perfectly expressed voter sentiment, Goldwater opened a debate that has yet to be resolved. How extreme? Whose liberty? By what standards?
Director Allan Francovich’s feature documentary On Company Business has a similar problem. A three-hour examination of the activities and actions of America’s Central Intelligence Agency (CIA), it raises more questions than it answers.
Francovich’s technique is direct and, for the most part, effective. Public documents — newsreels and TV news tapes — are set off against interviews with the experts, a selection of ex-CIA agents and employees, political exiles, labour leaders and government functionaries.
Historically, the filmmaker accepts and supports the analysis of Philip Agee, one-time agent and author of the controversial expose Inside the Company: CIA Diary (1975). According to Agee, “the Company” was formed to act as a covert vehicle for U.S. economic expansionism following the Second World War.
In effect, says Agee, the CIA acts on behalf of American big business and the multi-national corporations. Later, it's noted that John McCone, a former CIA director, is now a director of International Telephone and Telegraph (ITT), a company that was deeply involved in the "destabilization” of Salvador Allende's Chile.
So far, so good. But as any reader of spy fiction, Penthouse or, for that matter, The Reader’s Digest knows, the CIA does not exist in vacuum. There is something called "the intelligence community.”
Although the film never mentions it, the U.S. federal government supports some 17 other major investigative agencies, among them the FBI and separate army, navy and air force intelligence operations.
Indeed, virtually every nation in the world maintains its own network of spooks and spies, players on the international chessboard.
Think about it for a moment and you realize that, to a large extent, our attitudes to espionage activities have been conditioned by the euphemistic language of the spymasters.
By referring to “players” and the “international chessboard” (as I just did a moment ago), don’t we tacitly accept that it’s all just a game and, perhaps, an adventuresome one requiring admirable skills?
I’d be willing to bet that all of the ex-agency people interviewed in the film joined the CIA with the best of motives. Their involvements led to various disillusionments and at least four different reactions.
David Atlee Phillips became a “realist,” a games-playing professional who regards his job as necessary, if “tricky” and distasteful. Ex-company clerk James Wilcott remains bewildered and somewhat betrayed by what he saw.
Ex-agent Victor Marchetti has turned into a tough-talking cynic who seems most offended by the CIA’s support of “half-assed dictators,” and lack of professional standards. Agee became a crusader, out to bring down the whole rotten thing.
If Francovich’s film has one great failing, it is its concentration on CIA operations, rather than on the structure and essential nature of the agency itself. I think we need to know more about the spooks — who they are, where they come from, what they believe in and why they play this particular game — and more about the attitudes that allow us to make cultural heroes out of such pulp-fiction creations as James Bond, Matt Helm and The Destroyer.
On Company Business opens Friday [January 22, 1982] at the Ridge Theatre for a limited three-day run. Filmmaker Francovich will be at the theatre each night at 7:30 to introduce his film and take questions from the audience.

Afterword: When the lights went out across Venezuela on March 7 (2019), my first reaction was to imagine the high-fives in Langley. Then came the news that Washington was the destination of choice for Jair Bolsonaro’s first foreign trip. While in the U.S., Brazil’s new, fascist-sounding president was a guest of the Central Intelligence Agency at its Virginia headquarters. As a new generation of far-right politicians take power in Latin American, a cynic might conclude that the Company is back in business.
Actually, it's more business as usual. Nearly 40 years after Allan Francovich’s exposé, CIA agents continue to scamper about the world suborning politicians, fabricating sock-puppet assets (such as self-proclaimed Venezuelan president Juan Guaidó) and facilitating any “regime change” deemed to be in the American interest. What both Bolsonaro and Guaidó should keep in mind, though, is that Company assets all come with best-before dates. Just ask Manuel Noriega, installed by the U.S. as its man in Panama following a 1968 coup, then removed 21 years later by a full-scale military invasion.

See also: During his 1982 visit to Vancouver, director Allan Francovich sat down with me for an interview.