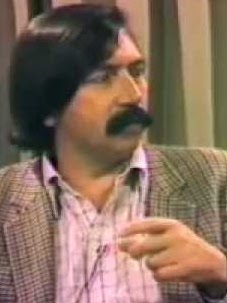 ALLAN FRANCOVICH during an October, 1982 interview.

In pursuit of the truth


Following a screening of his 1980 feature On Company Business, director Allan Francovich sat down with me for an interview in Vancouver. Born on this day (March 23) in 1941, he talked about documentary filmmaking and the pressure that the CIA exerts on U.S. broadcasters.

IN 1973, DIRECTOR ALLAN Francovich was planning to return to Santiago. The son of an American mining engineer, he'd lived in many countries but “Chile was the country I really loved.”
A student of drama and stage directing, Francovich had become “intense about filmmaking” during his stay at Paris's Sorbonne. His first feature, 1977’s San Francisco Good Times, chronicled the events of 1968 to 1972 by telling the story of a Bay area underground newspaper.
Convinced that a flowering of the arts was about to occur under newly-elected Chilean president Salvadore Allende, the multilingual Francovich was planning to join with independent producer Pablo de la Barra in the development of the South American nation’s feature film industry.
“That was much more interesting to me than working for (Hollywood exploitation movie producer) Roger Corman,” Francovich told me in an interview. Unfortunately, there were other Americans with less gentle plans for Allende's country.
As a result, Francovich stayed in San Francisco, where he produced his second feature, 1975’s Chile in the Heart. It was a documentary profile of Pablo Neruda, the Nobel Prize-winning Chilean poet who was Allende's ambassador in Paris, and who died on the same day as his president.
It was impossible to tell the story of the poet without acknowledging his political involvement with Allende. Research the coup that toppled Allende and you can't avoid mentioning the U.S. Central Intelligence Agency (CIA).
It followed that Francovicih’s next project should be the ambitious On Company Business, an examination of the CIA's role in international affairs. A five-year project, the three-hour film is the distilled essence of nearly 150 hours of newsreel footage and another 150 hours of special interviews.
Completed in 1980, the $400,000 documentary was partially financed by a pre-sale to WNET-TV, the American Public Broadcasting Service’s New York station. Although PBS contracted for the right to three showings, the Francovich feature was shown just once, in May, 1981.
The program “upset the CIA so much that political pressure was applied to PBS so that it wouldn't show it again,” Francovich says. The picture now has entered the marketplace as a theatrical motion picture, seeking its audience on a city-by-city basis. Premiered in Canada at the Ridge last weekend [January, 1982], the film will be shown in the East and probably have a return engagement here in the spring.
U.S. openings are also planned for the spring. The film's appearance in the U.S. will coincide with Universal Pictures' release of Missing, a suspense drama from politically engaged director Constantin (State of Siege) Costa-Gavras. In it, Jack Lemmon stars as an American father searching for his son "missing” in Chile following the 1973 military coup. The screenplay is based on the true story of Francovich's friend, Charles Horman.
Acknowledging the limitations of documentary — “there are certain things you have to do” — Francovich says that he'd like to portray the CIA experience in dramatic terms. “There are psychological questions that are best handled in fictional form,” he said.
“I can't think of a single fiction film about what it's really like to work for the CIA in a third world country. You have to be able to picture this guy. He gets up in the morning in a Beverly Hills ranch house. He gets ready for work like a California executive, then walks out the door into Guatemala!
“I’d like to do the story of an all-American boy forced to encounter a society like Guatemala as an agent of the CIA,” he says. At the same time, though, Francovich wants to preserve his independence as a filmmaker, which means “knowing how to work on low budgets.”
He is currently developing a deal with European television to write and direct a one-hour TV drama based on the prison letters of Antonio Gramsci, an Italian intellectual who “spent 10 years in (Fascist dictator Benito) Mussolini’s jails.”

Afterword: Sadly, Allan Francovich's European television deal fell through, and he abandoned his Gramsci project. He did, however, find a congenial home among the progressive British broadcasters of the day, and his 1985 documentary Short Circuit was broadcast on the U.K.'s Channel 4. A feature-length interview with the former head of El Salvador's intelligence agency, Col. Roberto Santivanez, it dealt with the murder and rape of activist nuns, the killing of two American labour advisors, and the 1980 assassination of Archbishop Oscar Romero. (The story is told in dramatic form in director John Duigan’s 1989 biographical feature Romero.)
Francovich continued to focus on Central America with The Houses Are Full of Smoke (1987), a three-hour long examination of U.S. involvement in Guatemala, El Salvador and Nicaragua. He returned to the subject of El Salvador’s death squads in Dark Passage (1990), then directed Gladio (1992). An exposé of CIA political meddling in post-Second Wold War Italy, it was broadcast as three episodes of the BBC documentary series Timewatch.
With his controversial 1994 feature The Maltese Double Cross — Lockerbie, the New York-born director went from historical investigation to history making. In it, he presented evidence for an alternative to the official story about who was responsible for the bombing of Pan American Airways flight 103 over Scotland. Banned from public screenings in the U.S., the picture suggests CIA involvement in the tragedy.
According to his obituary in the New York Times, “Allan Francovich, an award-winning documentary film maker, died on April 17 [1997] in Houston. He was 56. He died after a heart attack at an airport.” To say that his death was unexpected would be an understatement. Francovich collapsed in the customs area of George Bush International, an airport named for the 41st U.S. president and a man who once served as the director of the Central Intelligence Agency. As noted in his films, the Company has a history of dealing harshly with its enemies.