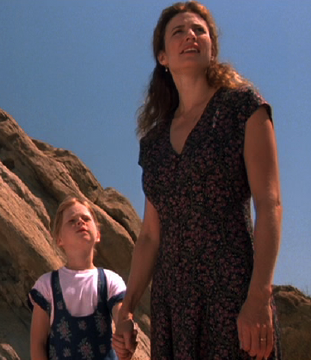 Mary (Kimberly Cullum) and her mother Sharon (Mimi Rogers) await God's judgement in the desert on the day of The Rapture.


What would the Lalonde brothers make of this? Today (June 29), the 10-episode television series The Leftovers makes its debut on HBO. It's based on a 2011 novel by Tom Perrotta and, according to the media buzz, it's set in the aftermath of a "Rapture-like" event when two percent of the world's population vanishes. There has to be a dollop of deja vu in this for St. Catherines, Ontario-based Peter and Paul Lalonde, the Christian evangelical filmmakers whose Cloud Ten Pictures acquired the rights to the 1995 best-seller Left Behind: A Novel of the Earth's Last Days. Written by Tim LaHaye and Jerry Jenkins, it's set in the aftermath of the biblical "Rapture" and was described, in a July 2002 Salon.com report, as "the most popular novel in America right now." In 2000, the Lalondes released their feature film adaptation, a picture that starred Kirk Cameron as a TV newsman who searches for answers following the sudden disappearance of countless persons. Though LeHaye disavowed their picture, the Lalondes produced two sequels: Left Behind II: Tribulation Force (2002) and Left Behind: World at War (2005). A much better film on the subject is writer-director Michael Tolkin's original and unsettling The Rapture (1991).

Friday, December 13, 1991.
THE RAPTURE.  Music  by  Thomas  Newman. Written and directed by Michael Tolkin. Running time: 102 minutes. Rated 14 Years Limited Admission with the B.C. Classifier's warning: some nudity, suggestive scenes, occasional violence and coarse language. THE END WAS NIGH.
Or so the first Christians believed. In their letters and sermons, His first century disciples described their visions of the last days, days they expected to see in their own lifetimes.
The end is nigh. As the end of the second millennium draws near, many contemporary believers are convinced that we will soon see Scripture's apocalyptic prophecies come to pass.
Some Christian fundamentalists look forward to "the Rapture," a sudden bodily assumption into heaven at the moment of Christ's Second Coming. Their faith inspired debuting writer-director Michael Tolkin to explore the dramatic possibilities inherent in a true believer's tale.
His The Rapture introduces us to Sharon (Mimi Rogers), long distance operator 134, second cubicle from the left, second to last row in the cavernous Los Angeles telephone exchange.
A swinging single, she has become increasingly dissatisfied with serial sex. One morning at 3 a.m., she rousts her lover Randy (David Duchovny) out of her bed.
A sincere sort, he listens to her talk of spiritual needs and her vision of a pearl.
"You hate your job," he tells her. "You hate your life. You want to feel special.
"There's no pearl," he argues. "There's only us."
"There has to be something more," she says. ". . . I'm tired of the pain in my life. I'm tired of feeling empty all the time."
A gradual, gritty, starkly realistic movement towards faith ensues. Eventually, Vic (Patrick Bauchau), another lover, notices that she's "got the look."
"What look?"
"The goofy smile."
Despite Vic's ridicule, Sharon is determined to live her new religion.
Under Tolkin's sympathetic direction, Rogers, an actress who specializes in emotionally distant characters, makes a very effective transition from disconnected dissipation to ethereal self-involvement.
Like Bruce Beresford in 1983's Tender Mercies, Tolkin allows his "born again" Christians a full measure of dignity. With a distance of his own, he poses the question "what if they're  right?"
In the second half of his film, Sharon's spiritual commitment is sorely tested. Following a period of marital happiness — "the universe I live in is filled with God" — she learns that the Rapture is imminent, and then suffers a tragic personal loss.
Convinced that she has received a sign, she goes into the desert with her daughter Mary (Kimberly Cullum) to await Armageddon. What follows is a harrowing, even shocking examination of the consequences of embracing God's perceived will.
A transcendental horror story, The Rapture poses its existential questions for our serious consideration.

Afterword: For Rapture cinema buffs, the fun really begins in 1972, the year of A Thief in the Night. The first of a four-picture series from independent Christian filmmaker Russell S. Doughten, it is the story of Patty Jo Myers (Patty Dunning), a young wife who is "left behind" to face the time of tribulation. It continues through A Distant Thunder (1978) and Image of the Beast (1981). His final film, The Prodigal Planet (1983) takes up the post-apocalyptic tale, but with a new set of characters. A decade later, Left Behind authors Tim LaHaye and Jerry Jenkins acknowledged Doughten's films as the inspiration for their own series of novels. In 1998, Canadian televangelists Peter and Paul Lalonde produced Vanished, their first theatrical feature and the picture that established the Rapture as their own stock in trade. Between 1998 and 2001, the brothers wrote and produced their own four-film series, all filmed in Toronto, consisting of Apocalypse: Caught in the Eye of the Storm (1998), Revelation (1999), Tribulation (2000) and  Apocalypse IV: Judgement (2001). Among the actors who appear in the Lalonde pictures are supermodel Carol Alt,  Gary Busey, Howie Mandel, Margot Kidder, Corbin Bernsen, Burt Reynolds, Orlando Jones, Catherine Oxenberg, Richard Thomas,  Louis Gosset Jr. and Judd Nelson. In their four-picture Apocalypse series, the antiChrist is played by Nick Mancuso. Scheduled for release in October, 2014 is a remake — or, in the current argot, "the reboot" — of Left Behind, with Paul Lalonde as co-writer and co-producer. This  time around, Nicolas Cage, everybody's favourite Ghost Rider, plays airline pilot Rayford Steele.

See also: Best known as a novelist and screenwriter, The Rapture's director Michael Tolkin was a 1992 screenplay Oscar nominee for adapting The Player, his own 1988 satirical novel about Hollywood filmmaking, for director Robert Altman.