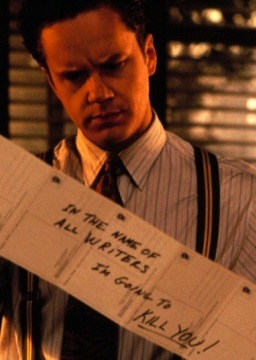 Production executive Griffin Mill (Tim Robbins) considers the meaning of life and the possibility of death in director Robert Altman's The Player.

Get away with murder


Beneath all the tinsel lies the real tinsel


One of the most celebrated movie moments, it runs for just over three minutes. On this day (March 14) in 1957, director Orson Welles called "action" on the opening shot of his film-noir masterpiece Touch of Evil. According to Hollywood historian Charles Higham (in his 1970 book The Films of Orson Welles), "Welles wanted the whole of the opening sequence . . . shot from a 22-foot crane in one take, starting from a close-up of a time bomb dial." The camera then swept upwards, following a car and two pedestrians through the streets of Venice, Calif. The take ends with the pedestrians, newlyweds played by Janet Leigh and Charlton Heston, kissing in the moment before the car explodes. Impressed by what Welles had accomplished (in a time before Steadicams or CGI), other directors have offered homages his famous "long take" in their own films. Notable examples include Martin Scorsese (in 1990's Goodfellas and Joss Whedon (Serenity, 2005). The most playful nod to Welles was offered by director Robert Altman, whose 1992 movie about movie-making, The Player, opens with an eight-minute tracking shot around a film studio in which the characters are talking about long tracking shots.

Friday, April 24, 1992.
THE PLAYER. Written by Michael Tolkin, based on his novel. Music by Thomas Newman. Directed by Robert Altman. Running time: 124 minutes. Rated Mature with the B.C. Classifier's warning "some very coarse language, occasional nudity and suggestive scenes." GRIFFIN MILL (TIM Robbins) gives us what we want.
The senior vice-president of production at a major Hollywood studio, Mill is on top and determined to stay there. He knows that "there are certain elements that we need to market a film successfully.
"We need suspense," he tells his new girlfriend, non-moviegoer June Gudmundsdottir (Greta Scacchi). "Laughter. Violence. Hope. Heart. Nudity. Sex. And happy endings.
"Mainly happy endings."
Director Robert Altman gives us what he wants. A product of the psychotropic sixties, he's been called everything from a maverick genius to a self-indulgent fake.
He's best known for his marketplace successes, among them M*A*S*H (1970) and Nashville (1975). Altman became a Hollywood exile for refusing to make the sort of films the system's Griffin Mill demanded.
With his irresistibly intelligent The Player, he joins the select group of industry insider-outsiders who've turned their satirical attention to the system itself. Based on screeenwriter Michael Tolkin's adaptation of his own 1988 novel, Altman's comedy-laced drama ranks with the best of them.
With the easy cheek of a man secure in his own talent, he delivers the sort of film that "power player" Mill could market successfully. It has suspense.
From its opening moments, the corporately cool Mill is a man on the edge. Professionally, he feels threatened by the shark-like dynamism of young "comer" Larry Levy (Peter Gallagher).
Personally, Mill is being threatened by an anonymous poison-pen pal. Almost daily, he gets notes from a disaffected screenwriter who promises "I'm going to kill you!"
Violence follows when Mill tracks down and accidentally kills angry, obnoxious David Kahane (Vincent D'Onofrio). Suspense increases when it turns out that ratty little David was the wrong man.
Hope? Heart? Actor Robbins brings to his character a wonderfully charming ambiguity.
As Mill, his soft, even friendly, features are like those of the young Orson Welles. There is something in the eyes. Is it decency? Or, perhaps, unthinkable evil?
Whatever it is, the murdered man's attractive former paramour finds it fascinating. Mill courts the cool, self-possessed June against the background of a police investigation and cutthroat studio politics.
Nudity? Sex? Of course, but in moderation and within the bounds of artistic necessity.
Laughter is built in as well. As Pasadena police detective Susan Avery, Whoopi Goldberg turns in a fine comic performance, as does Dean Stockwell, cast as fast-talking talent agent Andy Civella.
And, as a special bonus, more than 60 of Altman's celebrity friends and admirers appear as themselves in bit roles, and as set decoration. This is a picture you have to see twice to spot them all.
That, for a bottom-line man like Mill, qualifies as a happy ending. Sharp and successful, the picture that Altman wanted to make is also one that film-goers will want to see.

Afterword: After making his big screen debut with a B-budget feature, 1957's The Delinquents, Robert Altman spent more than a decade as a television director, working on such series as Whirlybirds, The Millionaire, Troubleshooters, Bonanza and Combat. The second of his 34 features, 1969's That Cold Day in the Park,

See also: The famous long tracking shot referred to above can be seen in this link to Orson Welles's Touch of Evil.