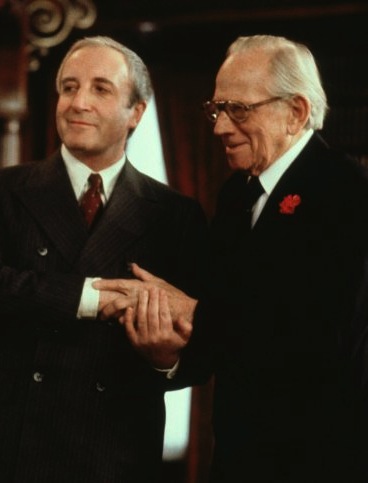 As "Chauncey Gardiner," Chance, the gardener (Peter Sellers) becomes the friend of financier and presidential advisor Ben Rand (Melvyn Douglas) in 1979's Being There.

Banished from his garden


The number of actors who have played dual roles is in the hundreds. Showing off an ability to do double duty is practically a rite of passage in the movie business. The number of actors with multiple roles in the same film is a shorter list. Alec Guinness holds the record with his eight-character tour de force in 1949's Kind Hearts & Coronets, but the Wachowski brothers made their own place in the record books with Cloud Atlas (2012), a film in which every member of the principal cast plays multiple roles, with Tom Hanks, Halle Berry, Jim Sturgess and Hugh Grant topping out at six each. With all that duly noted, Peter Sellers remains unique for making a habit of plural portrayals. Born on this day (September 8) in 1925, Sellers was Mr. Multiple straight out of the gate, playing a dual role in his debut film, 1951's Penny Points to Paradise, and six parts in his second, Let's Go Crazy (also 1951). After his three-role The Mouse that Roared (1959) came the dual-role Lolita (1962) and his Oscar-nominated three-part turn in 1964's Dr. Strangelove. Topping out at six roles (in 1974's Soft Beds, Hard Battles), he slacked off to three (1979's The Prisoner of Zenda), and then two (1980's The Fiendish Plot of Fu Manchu). Today, we remember his penultimate film role, the singular Chance in 1979's Being There.

Sunday, February 10, 1980.
BEING THERE. Screenplay by Jerzy Kosinski, based on his 1970 novel. Music by Johnny Mandel. Directed by Hal Ashby. Running time: 130 minutes. Mature entertainment.
Tabula rasa: An erased (or blank) tablet), clean slate; fig./ the mind at birth.
*    *    *
IMAGINE A MAN OF ABOUT 33. Imagine that this man has lived his entire life within a house in downtown Washington, D.C., a life spent tending a high-walled garden and absorbing television programs.
The man can neither read nor write. Apparently retarded, he has never questioned his situation or his circumstances. He has never experienced anything. He is as mindless as a geranium.
Imagine a change of circumstance. Imagine that the owner of the house dies. The mindless man is told that he must leave. He is forced to encounter the world and the world to encounter him, a perfect tabula rasa.
*    *    *
Director Hal Ashby has a feeling for fashionability. In the uncertain  movie marketplace, he always seems to know what will sell.
His most recent films (1975's Shampoo, 1976's Bound for Glory, and 1978's Coming Home) have been striking, timely and hugely successful. With a fine commercial instinct, he trades in social consciousness in the same way that a pornographer trades in sex.
Being There, his latest, focuses on Chance, the gardener (Peter Sellers). If America wants simplicity, innocence, honesty and empty-headed virtue in this presidential election year, Hal Ashby is here with a movie that's full of it.
*    *    *
Being There, Jerzy Kosinski's comic novella, was first published in 1970. A slim volume based on a slight conceit, it worked variations on the idea that people generally see what they want to see, hear what they want to hear, and that, presented with a tabula rasa, will always write their own names.
Banished from his garden, Chance is accidentally bruised by a wealthy woman's limousine. She is Eve (Shirley MacLaine), and she take him to her home, where her ailing husband Ben Rand (Melvyn Douglas) has a live-in medical staff. Introduced to people with power and influence, Chance speaks to them with the calm assurance and slightly preoccupied air of a five-year-old.
Since powerful, influential people do not ordinarily listen deferentially to children, they hear his name  — "Chance. I'm  a gardener" — as Chauncey Gardiner. His manner is accepted as proof of his status, and his most banal utterances are given the weight of Solomonic pronouncements.
*    *    *
On the printed page, Kosinki's story has a kind of ethereal charm. Ashby's film, unfortunately, turns it into an exercise in excess. A movie-maker with a meat-cleaver mentality, Ashby's Being There has all the subtlety of a beached whale.
Consider the moment that Chance first steps out into the world. Ashby's camera pulls back to reveal a rundown, racially-mixed neighbourhood. On the soundtrack we hear Eumir Deodato's pop arrangement of Also Sprach Zarathustra (otherwise known as the Monolith's music from 2001: A Space Odyssey (1968).
Consider the scene in which the U.S. President (Jack Warden) arrives at the palatial home of ailing financier Rand. Although the visit is a private call rather than a public event, Ashby has the chief executive arrive with an entourage of limousines and police cars, the entire parade a cacophony of flashing lights and screaming sirens.
Consider his portrayal of the president. Not content to show us a character who is merely dull-witted, opportunistic and image-obsessed, Ashby makes a running gag of the Commander-in-Chief's sexual impotence. It's a cheap shot and it's typical of the director's style.
*    *    *
No doubt about it, Being There is going to be a big critical and financial success.
It doesn't matter that Sellers, at 54, is about 20 years too old to play the part of a Christ figure. After years of leaping about as the hyperactive Inspector Clouseau, he gains in stature just by keeping quiet. According to the gossip columnists, the novelty effect alone could win Sellers an Oscar nomination.
It doesn't matter that Ashby's picture has all the profundity of a panty raid. The director discovered years ago that appearing deep is more important than being deep.
Mindful of the mood of the millions, he's offering a picture with a fine cast, a few laughs and some superb set design. Being There is a slight, light comedy masquerading as a message movie.

Afterword:  Polish-born man of letters Jerzy Kosinski captured the American intellectual zeitgeist in the 1970s with the satirical novel that absolutely everybody had to read. And he made it so easy to be smart. Unlike the doorstop-sized works of a John Updike or Thomas Pynchon, Kosinski's book was 116 pages of bite-sized narrative, chunks of text a few paragraphs long separated by three asterisks (* * *) that were a signal to readers to take a breath and savour the author's wit. Yes, I was deliberately heckling the best-selling writer in my use of the starry pause marks in my review of the Hal Ashby adaptation. And yes, Peter Sellers got an Oscar nomination for best actor (though the win went to Dustin Hoffman for Kramer Vs. Kramer). Sellers's co-star Melvyn Douglas, an actor in the twilight of a 50-year-long career, won the best supporting actor Academy Award.