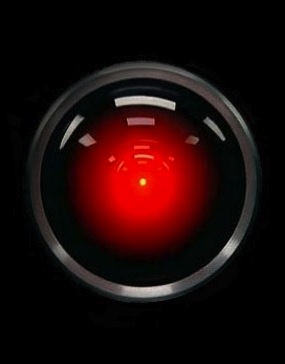 Ever watchful, the HAL 9000 computer (voice of Douglas Rain) really is the brains of the operation when astronauts set out for Jupiter in director Stanley Kubrick's 1968 film 2001: A Space Odyssey.


On this day (April 12) in 1961, Yuri Gagarin became the first man in space. Borne aloft in a Vostok 1 space capsule, the 27-year-old Russian orbited the Earth once before returning from his 108-minute flight. Thus did the Soviet space program's "Chief Designer," the Ukrainian-born Sergei Korolev, deliver the second greatest blow ever to American self-esteem. (The first, and greatest, was the October 4, 1957, launch of Sputnik 1, the world's first artificial satellite.) For the United States, the so-called "space race" generated a multibillion dollar high-tech program resulting in a victory of sorts. Americans were the first (and to date only) men to set foot on the moon, a "giant leap for mankind" that followed eight years later. After just five more visits, the U.S. lost interest in manned lunar missions. Since 1972, it has concentrated on a prolonged series of military interventions, deemed more vital to the national interest than space exploration. True, there is an International Space Station, in low-earth orbit since 1998. Ironically, since the U.S. ended its manned spaceflight program, its only access to the ISS is aboard Russian Soyuz rockets launched from Kazakhstan's Baikonur Cosmodrome, the very spaceport from which Gagarin made his historic first flight. It's a different future from the one portrayed in Stanley Kubrick's 1968 feature 2001: A Space Odyssey.

Afterword: I was fortunate enough to see 2001: A Space Odyssey during its premiere engagement at Loew's Capitol Theatre in New York, before it was trimmed by 19 minutes. Having interviewed Arthur C. Clarke in Toronto during his promotional tour on behalf of the film, I was prepared for a life-changing experience. Imagine my disappointment at sitting through nearly three hours of pretentious codswallop. Yes, at the time I felt the need to offer filmgoers something to think about during the picture's more documentary moments — moments that stretched on and on — and there was a great deal to draw upon. Kubrick, one of the most outrageously overrated filmmakers of the 20th century, was a cinematic jackdaw. His was a career built on timely borrowings (theft is probably too harsh a word), and the pack journalism of critics who felt the need to take him seriously. In the fullness of time, we have come to understand that 2001's landmark status had as much to do with a generation's discovery of mind-altering drugs as it did with Kubrick's art.