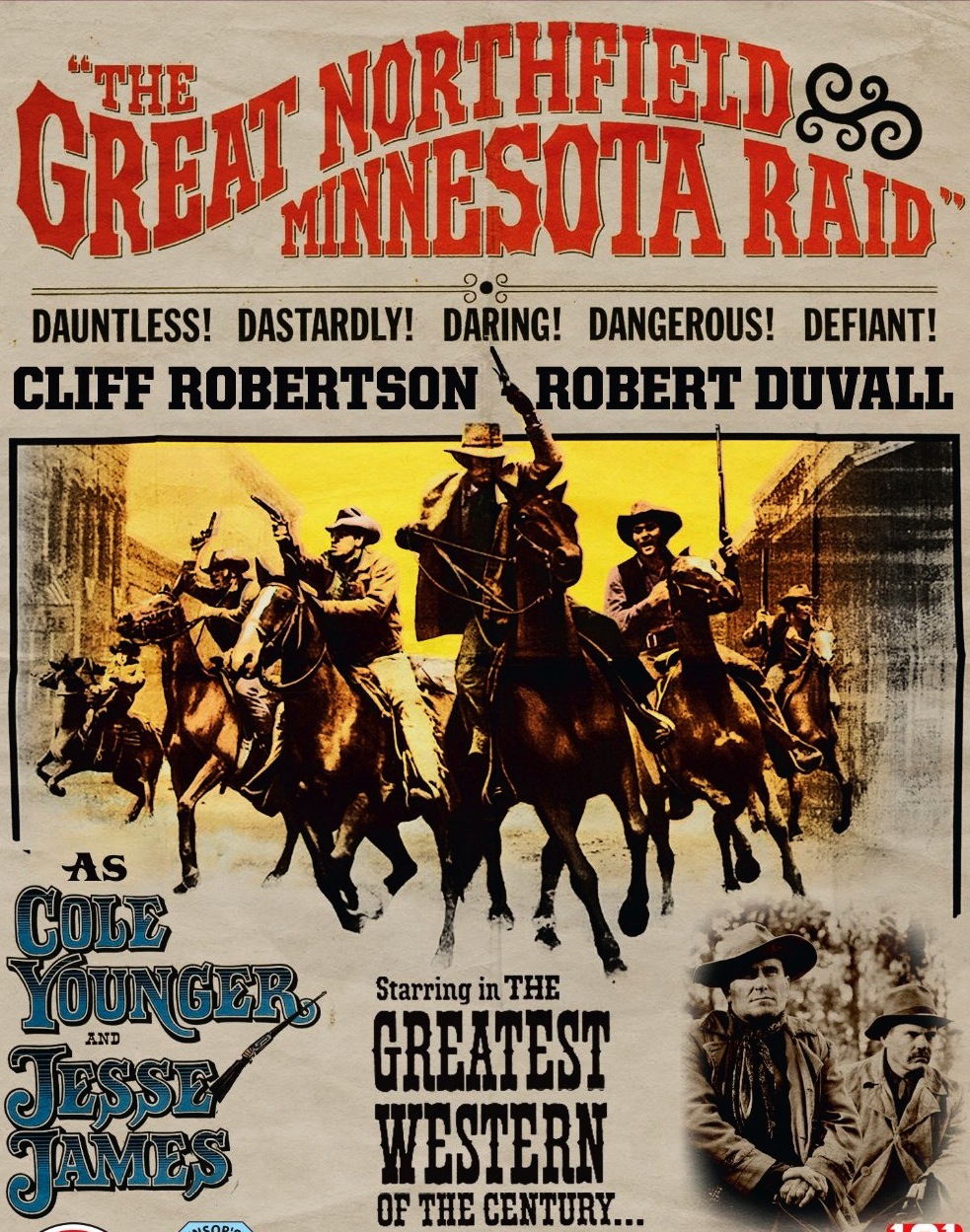 Telling it like it wasn't — the cover of a European DVD release of 1972's The Great Northfield Minnesota Raid.


Which came first, the folk song or the folk legend? In the case of career criminal Jesse Woodson James, born on this day (September 5) in 1847, the song came years later. First recorded in 1924, Jesse James features the famously mournful lyric "But that dirty little coward / That shot Mr. Howard / Has laid poor Jesse in his grave." Overall, the song sums up the contents of nearly 50 years of his aggrandizement in 19th-century dime novels, a 1899 "biography" by his son, Jesse James Jr., and a pair of 1921 silent films in which Junior played his dad. Dozens of movies (and a single-season TV series) followed, including the one that really sealed the deal, 1939's Jesse James, in which Tyrone Power and Henry Fonda starred as the James brothers, Jesse and Frank. Starved for heroes in the years following the Civil War, the defeated South embraced the violence-prone terrorist, mythologizing him as a "social bandit," and celebrating him as the Confederate Robin Hood. Though the facts fall considerably short of the legend, the movies, mindful of the advice of Mark Twain, have never let the truth stand in the way of a good story. Fair warning: In my review of 1972's The Great Northfield Minnesota Raid, I quoted director Sam Fuller, who characterized the historic Jesse James in language that may be offensive to many readers.

Monday, May 29, 1972
THE GREAT NORTHFIELD MINNESOTA RAID. Music by Dave Grusin. Written and directed by Philip Kaufman. Running time: 91 minutes. ADD TO THE LONG list of actors who have played Jesse James the name Robert Duvall. Add to the list of directors who have mythologized his murderous exploits, Philip Kaufman.
Listen, for just a moment, to veteran action director Sam Fuller's recently published [1969] opinion of America's "Robin Hood."
"Jesse  James was a half-assed homo who impersonated a girl for Quantrill's Raiders when he was 15. Acting as a hooker, he enticed soldiers into a little shack called The House of Love, where these bastard raiders would kill the soldiers and rob them.
"When he was 18, Jesse and his brother (Frank) held up a hospital train, wherein they killed all the casualties and robbed them. Since I despise Mr. James, and would give my right eyeball to make the true story of Jesse James, I've always had sympathy for (James's killer) Robert Ford.
"One day, the real story of Jesse James will be made. It will shock people."
Fuller might tolerate Kaufman's conception of Jesse —egomania, viciousness and homosexuality are all implied in actor Duvall's performance — but he would certainly turn thumbs down on The Great Northfield Minnesota Raid.
Say the film's advertisements: "The West the way it really was!" To give the film the flavour of accuracy, Kaufman provides a narrator (Paul Frees) who almost immediately tells us that "in all the world, they were the greatest outlaws."
While he's intoning this, the gang is riding at full gallop towards the camera, a gang that includes "Jesse James, riding side by side with the great Cole Younger. And they rode like the wind."
In a series of newsreel-like flashbacks, we learn how these five Missouri youths were driven to their lives of crime by the evil bankers, railroads and the crooked politicians in the pay of monied interests. Says James in his own defence: "I can't think of one single honest man we robbed."
Later, after they have set off for Northfield, Cole (Cliff Robertson) says the planned raid will be "kinda like a knightly crusade, or noble quest." There is, of course, a reason for the gang's noble mission.
Earlier, the people of Missouri, through their elected representatives in the state legislature, wanted to proclaim an amnesty for these selfless crusaders. The attempt was headed off by a timely bribe from detective Allan Pinkerton (Dana Elcar).
A willing tool of the railroad interests, gimlet-eyed Pinkerton has been carrying out a personal vendetta against the boys. "This war is to the knife," he tells a boxcar full of surly ambushers, "and the knife is to the hilt."
If Kaufman fails to make Jesse attractive, he more than makes up for it in his portrayal of Cole. For his part, Duvall (who looks more like Jesse than any previous actor) adapts his fundamentalist fanatic from 1970's M*A*S*H.  He plays the wily fox to Robertson's bluff, loveable bear.
Younger is the real brains of the outfit. He wants to rob Northfield's First National, "the biggest bank west of the Mississippi," to up the ante on the railroads and bribe amnesty back out of the legislators. Though miffed by Jesse's constant glory grabbing, he is too expansively good-natured to actually have it out with the little owlhoot.
Historically, Northfield was the end of the road for the James-Younger association. Of eight men who rode in, only two managed to ride out. Three were killed that day, and three more were captured alive to stand trial for their crimes.
Although the film ends with the same score, it plays a far different game. The problem is that the director wants it too many ways.
At times, Kaufman tries to infuse his picture with a Butch Cassidy kind of irreverence. At one point, Cole tinkers with a steam calliope. At another, he attends a slapstick, bare-knuckle baseball game, where he heartily contends that "our national sport is shooting, and always will be."
At other times, notably during the scenes with Pinkerton's ambushers, the Northfield posse and the local brothel girls, the director seems to be after a raw, Wild Bunch quality. Over it all, his narrator vainly tries to spread a veneer of historical verisimilitude.
The mixture doesn't gel. Despite some bright moments, Kaufman can't make the parts fit together. His Great Northfield Minnesota Raid leaves its audience (and Sam Fuller) still waiting for the Western that will tell it as it was.
*     *     *
AND, ON THE SAME PROGRAM — To complement its basically dishonest feature, the Strand Theatre has booked a basically dishonest short. Called Look to the Future, the film is a backward look at the island of Taiwan, "known to the world as the Republic of China."
A travelogue, the film focuses on those things that nearly a generation of foreign aid has bought for the Chiang-Kai-shek dictatorship: TV, traffic and tourist facilities.
The island's disputed history, iron-fisted politics and continuing internal conflicts are never once touched upon.
The picture is, of course, an anachronism. Ever since President Nixon developed a taste for Peking duck, its "Free China" pretence has been obsolete, even in the United States. The question, then, is why is the Strand inflicting dated U.S. dogma on its Georgia Street patrons?

Afterword: Over the years, few of my reviews prompted more reaction than the above Great Northfield Minnesota Raid notice, all of it angry and none in defence of the film itself. Vancouver is home to to the West Coast's largest gay community north of San Francisco. (Its first Gay Pride Week was organized in 1973.) What my May 1972 correspondents took exception to was the third paragraph, the one that quotes Sam Fuller's angry characterization of Jesse James. (It was from an interview featured in a book, The Director's Event: Interviews with Five American Film-Makers, published in 1969.) A man of his time, Fuller, then  57, expressed himself in language that by our time was offensive. In 1972, I assumed that readers would see past the his words to his genuine concern for the historical record. Boy, was I wrong. Particularly unsettling were the personal attacks from a few readers who apparently missed the quote marks and jumped to the conclusion that the words were mine.  At the time, I thought the controversial commentary in the column was my politically-charged attack on the short subject Look to the Future. After all, Vancouver's huge Chinese community had within it many supporters of the Taiwan government. Canada's 1970 recognition of the People's Republic was still the subject of lively discussion. No letters were forthcoming on that issue, though, Another lesson learned.