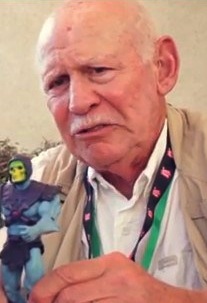 
Born on this day (April 23) in 1930, Alan Oppenheimer has been putting words in the mouths of cartoon characters for some 40 years. As the voice of the villainous Skeletor, he menaced Mattel's boy toy-inspired He-Man, and his girl toy sister SheRa in the 1985 cartoon feature The Secret of the Sword.

Monday, September 9, 1985.
THE SECRET OF THE SWORD. Written by Larry DiTillio and Bob Forward. Based on the Masters of the Universe action figures He-Man and She-Ra. Music by Shuki Levy, Haim Saban and Erika Lane (Lou Scheimer). Directed by Ed Friedman, Lou Kachivas, Marsh Lamore, Bill Reed, Gwen Wetzler. Running time: 91 minutes. General entertainment. CALL IT A SIXTH SENSE. Professional filmgoers develop certain instincts and, over the years, I've learned to be wary of cartoon features in which:
— the names of the featured characters are trademarked.
— supporting characters have labels rather than names.
— merchandising tie-ins were marketed before the movie was even thought of.
— the idea was first developed as Saturday morning cartoon concept.
The Secret of the Sword is such a picture. An animated advertisement for the Mattel toy corporation's Masters of the Universe™ line of plastic action figures, it purports to offer audiences the story of He-Man™ (voice of John Erwin) and She-Ra™ (Melendy Britt).
Though they are siblings, he grew up as Prince Adam of Eternia. She was stolen away as a baby, and raised as Adora, a force captain in the service of Hordak (George DiCenzio), the beastly ruler of Etheria.
They have matched swords that enable them to transform themselves into their superheroic alter-egos.
The bad guys are all ugly, unpleasant and have names such as Shadow Weaver (Linda Gary) and Skeletor (Alan Oppenheimer). Among the good guys are Nordic-looking self-righteous hunks with names like Glimmer (Linda Gary, again), Angella (Erika Scheimer) and Bow (George DiCenzio, again).
The picture comes from Filmation, a production facility in the utterly artless tradition of Hanna-Barbera. Together with H-B, it is responsible for most of the cartoon pollution that passes for animation on Saturday morning television in the U.S.
For a while, it manufactured a He-Man™ Masters of the Universe™ series for that market. The current theatrical feature, an example of limited animation of the least imaginative kind, looks like a lot of those TV episodes pasted together.