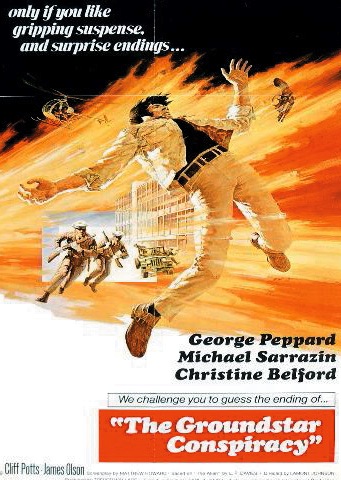 
A popular-culture historian interested in the Vancouver film and television industry's infatuation with science fiction can trace its origins to 1972, the year that a visionary producer named Trevor Wallace released his locally-filmed thriller, The Groundstar Conspiracy.

Tuesday, December 5, 1972.
THE GROUNDSTAR CONSPIRACY. Written by Douglas Heyes, based on The Alien, a 1968 novel by Leslie P. Davies. Music by Paul Hoffert. Directed by Lamont Johnson, Running time: 103 minutes. VANCOUVER, LONG TOUTED AS the Canadian Hollywood, has been flexing its movie-making muscles lately. This month [December, 1972], Theatre Row is boasting a pair of world premieres within a week of one another.
Quietly, with no major publicity campaign, Odeon Theatres is presenting local filmmaker Tom Shandel's debut feature, the $200,000 Another Smith for Paradise, scheduled to open seven days from now at the Coronet.
Last night, another Odeon house, the Vogue, welcomed The Groundstar Conspiracy. A $1.6-million Hollywood project, Groundstar was launched with the full preview treatment, a package that included the stars, the show and an invitation-only reception at the Planetarium.
Premiere tickets, which included the after-hours gala, were sold for $12.50, with proceeds going to the Simon Fraser University bursary fund. The Burnaby Mountain university was the major location for the film, shot here last summer [1971] with the working title The Plastic Man.
Based on a science-fiction thriller by novelist L.P. Davies, the movie opens with a series of explosions deep inside a maximum-security space project. One torn and bleeding survivor, technician David Welles (Michael Sarrazin), drags himself to the doorstep of a nearby summer house and falls at the feet of young widow Nicole Devon (Christine Belford).
Within minutes, a tough security agent named Tuxan (George Peppard) has sealed off the neighbourhood. He suspects Welles of being part of a conspiracy to rob the project computer's secret information, and delivers the badly injured technician, under guard, to a hospital for reassembly and interrogation.
Tuxan knows that there has been treachery on a dangerously  high level, and needs to break Welles for the evidence. But when the explosion victim recovers, he is a hopeless amnesiac.
In an  attempt to flush out Welles's co-conspirators, Tuxan engineers the patient's escape. Desperately trying to re-establish his own identity, the memoryless man seeks out the only other person who seems to figure in the plot — the widow Devon.
Like Welles, The Groundstar Conspiracy has a desperate air as it searches for some kind of identity. Throughout, it glimmers with the possibility of character development, issue confrontation or even genuine nightmarishness.
None of the glimmers appear to have caught director Lamont Johnson's eye, with the result that his film remains a routine actioner, a thriller-cum-adventure film with futuristic overtones.
Johnson worked well with the local scenery, including the architecturally striking SFU doubling for the Groundstar Research Establishment, a North Shore mill as the scene of a shoot-out and the curve of English Bay as the panoramic view from the widow Devon's West End apartment. He knows how to get impact out of an action sequence, as well.
In total, though, Johnson called for too little action and demanded too little acting. His film needs more of both, but its needs are undercut by Matthew Howard's pedestrian script.
Howard tries, by turns, to be glib and sensitive, but succeeds only in being silly. His story demands that the long centre of the film be devoted to Welles's identity crisis, and the development of his relationship with Nicole.
What Howard lacks is the knack for writing compelling dialogue. Johnson, who kept the tension up so well in 1970's The McKenzie Break, doesn't have the patience for such intimate scene building.
Not surprisingly, the acting is uniformly indifferent. George Peppard never really has his heart in his persecution of prisoner Sarrazin, who, in turn, seems only mildly interested in his character's true identity.
Belford, a screen newcomer, has a nice warm smile and a nicely rounded bottom for her brief, artistically-lit nude scene, but she lacks any real commitment to her character's involvement in Sarrazin's dull-witted predicament.
Lurking in the wings is the theme of individual freedom versus the responsibilities of the corporate state. The film's Important Issue, it has its brief moment in the spotlight with the revelation of the surprise ending.
It's part of a good gimmick that is dulled, unfortunately, by all the melodrama that comes before.

Afterword: British-born television producer Trevor Wallace saw the future. It was revealed to him by Lorne Greene, who was in London to star in the 1969 Universal-TV feature Destiny of a Spy. "Canada," the Ottawa-born Greene told Wallace. The new frontier for production would be Hollywood North. In 1971, Wallace arrived in Vancouver to produce a theatrical feature for Universal, The Groundstar Conspiracy. Convinced that a production boom was imminent, he bought a house in Port Moody and moved in with his family. For Universal, he produced the 1973 TV movie Tom Sawyer, filmed on location in Ontario. At the same time, he was putting together financing in Vancouver for his own independent feature, 1974's Christina, a Hitchcockian suspense thriller based on his own screenplay. Convinced that he could break through by making a major motion picture in B.C., Wallace assembled a big name cast — among them Vincent Price, Shelley Winters, Zero Mostel, Yvette Mimieux, Sam Waterston, Ian McShane, Stanley Holloway and Donald Pleasence — for a remake of the 1943 Orson Welles thriller Journey into Fear. Released in 1975, the picture was not a success, and Wallace returned to England. Today, we can see clearly that Wallace was not wrong about Vancouver; he was just a decade too early. The boom came in the mid-1980s with shows such as 21 Jump Street and MacGyver. B.C. found its "Hollyweird" niche with long-running shows such as The X-Files, several Stargate variations and Supernatural. Though Lorne Greene is remembered for playing Commander Adama in the original 1978 Battlestar Galactica, Trevor Wallace and his Vancouver legacy are largely forgotten.