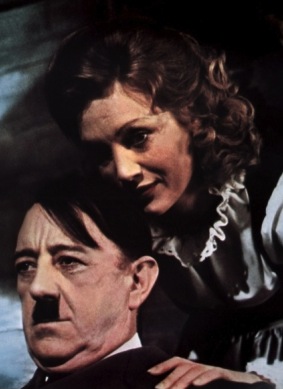 
In the sort of coincidence that seems to be the very definition of black comedy, today (April 20, 2014) is both Easter Sunday and Adolf Hitler's birthday. The day that celebrates Christ's resurrection contains a reminder of the fact that fascism is enjoying a resurgence, and that Hitler's preferred political philosophy is said to be in vogue among leaders of the recent "revolution" in Ukraine. In 1967, it was Mel Brooks who made the comic connection. His classic backstage comedy, The Producers, opened its mock Broadway musical with a history lesson. "Germany was having trouble," the cast sang. "What a sad, sad story; / Needed a new leader to restore its former glory; / Where, oh, where was he? / Where could that man be? / We looked around, and then we found / The man for you and me! /And now it's . . ." In the era of Hair and Oh! Calcutta!, the idea of a Broadway production called Springtime for Hitler was outrageously funny. Today, the laughter is a little less hearty. More in keeping with our politically contentious times are the cinema's reminders of just who he was and of the winter that inevitably followed his "springtime." One attempt to do just that was an ambitious British-Italian co-production, 1973's Hitler: The Last Ten Days.

Afterword: Playing Hitler in a movie can make for an interesting addition to an actor's credits. Among the better known names to have worn the toothbrush moustache on screen recently are Anthony Hopkins (The Bunker; 1981), Robert Carlyle (Hitler: Rise of Evil; 2003); and Bruno Ganz (Downfall; 2004). Being likened to Hitler in the geopolitical arena is more like a death sentence for those identified as "worse than Hitler" in their political villainy. In this century, Iraq's president Saddam Hussein was overthrown and hanged; Libya's prime minister Muammar Gaddafi was overthrown and shot; and Al-Quaeda founder Osama bin Laden was tracked down and summarily executed by the heavily-armed heroes of the U.S. Navy's SEAL Team Six (a mission celebrated in the Oscar-nominated 2012 movie Zero Dark Thirty).

See Also: In place of the traditional Easter egg hunt, Reeling Back offers a Film Quiz that invites film fans to try their knowledge of Hitler and his henchmen as seen through the camera's lens.