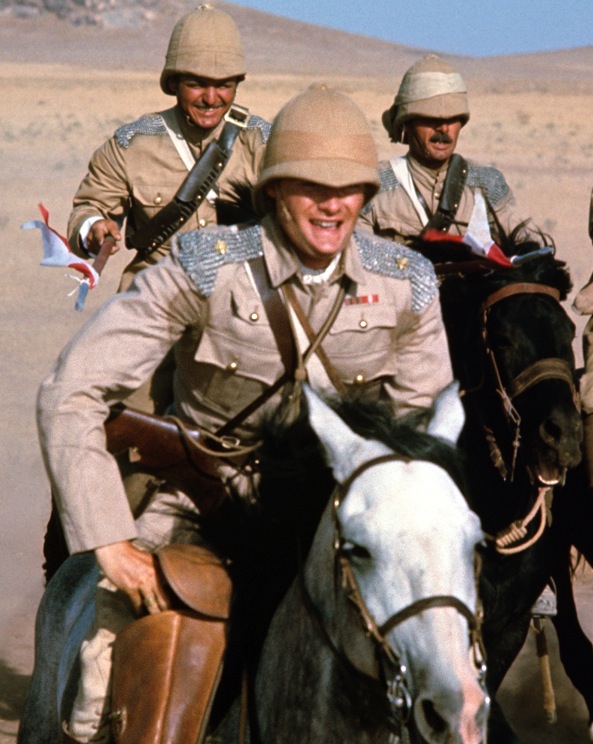 The young Winston Churchill (Simon Ward) leads the charge for God, Queen and his own career advancement in the glory days of the British Empire.


He was the people's choice for "greatest Briton of all time" in a poll taken by BBC TV in 2002. Born on this day (Nov. 30) in 1874, Sir Winston Churchill exemplifies the triumph of image over reality. Britain's Second World War prime minister, he was a lifelong self-promoter, a politician whose wit and eloquence are celebrated in the face of his shortcomings. No candidate for greatness in 1915, he lost his job as First Lord of the Admiralty for promoting the disastrous Gallipoli campaign. In the lesser post of Secretary of State for War and Air, he presided over the post-First World War invasion of Russia or, as it came to be known, "Churchill's crusade." In 1942, he said "I have not become the King's first minister in order to preside over the liquidation of the British Empire," yet he did precisely that, creating a "special relationship" with the U.S. that led directly the intervention-happy worldview so prevalent today. Another line attributed to him — "History will be kind to me, for I intend to write it" — captured his media-savvy philosophy, while his six-volume The Second World War (1948-53) and four-volume History of the English-Speaking Peoples (1956-58) told it his way. With this in mind, Reeling Back offers for your consideration the 1972 biographical feature Young Winston.

October, 24, 1972
YOUNG WINSTON. Written and produced by Carl Foreman, based on My Early Life, by Winston S. Churchill. Music by Alfred Ralston. Directed by Richard Attenborough. General entertainment. AS THE FILM OPENS, Young Winston is uniformed and stiffly still, sitting astride his horse. Posed like an equestrian statue, he has taken his heroic stance at the crest of a hill and is silhouetted  against the sky.
"Who's the bloody fool on the grey?" growls an offscreen voice.
"Someone who wants to be noticed, I imagine," says another.
"He'll be noticed . . . Get his bloody head blown off."
Of course he didn't. Despite a brashness that bordered on the foolhardy — "I need medals. Lots and lots of medals," he once wrote — Winston Spencer Churchill survived India, the Sudan and South Africa. He made his adventures the subjects of best-selling books, and used his notoriety as a springboard into Britain's House of Commons.
Now an American writer/producer and an English director have joined forces to turn a later book — My Early Life: A Roving Commission (1930) — into a movie.
Their idea, according to director Richard Attenborough, was to fashion "an intimate epic." That phrase is the key to the film, a movie that offers its audience a series of spectacularly crafted vignettes that refuse to fuse into a coherent whole. The elements of epic work well; those of intimacy, hardly at all.
The project began with Churchill himself. The 88-year-old statesman had seen Carl Foreman's 1961 adaptation of Alistair MacLean's The Guns of Navarone. He called in the American-born filmmaker and asked him if he were interested in doing a "warts and all" screen version of My Early Life. Foreman was.
Foreman should have been a good choice. As a screenwriter, he numbers among his credits Oscar-winning projects like High Noon (1952) and The Bridge on the River Kwai (1957). A man with a strong social conscience, Foreman also scripted a number of message movies, including one of the first defiantly anti-war films, 1963's The Victors.
Given a creative blank cheque by Churchill (and a $6,500,000 one by Columbia pictures), Foreman succumbs to the temptation to preach. His film insists on pounding home the twin truths of war's insanity and youthful alienation, adding in the the necessity of youthful involvement in the affairs of state.
On the whole, these are fine messages. But they do tend to get in the way of the story, effectively reducing Churchill to a spokesman, fighting modern moral battles in a picturesque period setting.
The film begins in 1897, with the 23-year-old Churchill (Simon Ward) glory-hunting in India. From his experiences, he produces a book critical of the high command, an action unlikely to help his advancement in the military. His goal, however, is politics, and he begs his mother, Lady Jennie Churchill (Anne Bancroft), to intervene on his behalf and secure him a place within the expeditionary force to the Sudan.
In a series of flashbacks, the audience is introduced to even younger Winstons — the seven-year-old (Russell Lewis) being caned at public school, and the 13-year-old (Michael Anderson) revelling in the least attention from his distant, ailing father, Lord Randolph (Robert Shaw).
The elements of epic are here. The movie, entirely filmed with a slight sepia tint, evokes the 19th-century grandeur of empire with eye-filling battles and scenes set within the surviving palaces and parks of Victorian England. To insure accuracy, a £27,000 replica of the House of Commons was built.
The elements of intimacy, and ultimately of drama, are absent. Director Attenborough has produced a shirt-and-tie film, a formal historical reconstruction, flawlessly acted but, like his expensive Commons set, essentially artificial.
Designed to enhance the film's documentary feeling are three unexpectedly jarring scenes. In each one, a principal Churchill — Lord Randolph, Lady Jennie or young Winston — is interviewed by an offscreen voice. This is a modern cinema verite technique and it just feels intrusive in a dramatic period piece.
In each case, the purpose appears to be to ask embarrassing questions of the historical personages, and it smacks of needless sensationalism, especially the one with the widowed Lady Jennie. "One last question," the inquisitor intones. "What precisely was the nature of your husband's last illness?"
We know very well what he died of. A previous scene all but chalked the word on a blackboard for us. Lady Jennie is taken aback, but the interviewer persists until, finally, he gets the word onto the soundtrack: "Syphilis."
The technique is less intimate than offensive, and it left the real question unanswered. Under what circumstances did a lord of the realm and a member of Her Majesty's privy council come to contract such a disease?
The final unfortunate touch is in the narration (and the choice of narrator). Years ago, in a 1960 TV series called The Valiant Years, Richard Burton read the elderly Winston's prose with a fine fidelity.
For this project, though, Simon Ward (who does a credible impersonation of the young soldier and Parliamentarian) was called upon to voice some flash-forward commentary. The result sounds like comedian Rich Little confusing his J.F.K. with his John Diefenbaker  impression.
On the whole, Foreman has some fine ideas. His premise had promise. It should have resulted in a great movie. As it is, Young Winston is merely a large one, full of the expected sound and fury, all of it signifying less than it could have.

Afterword: Starting in 1969, Richard Attenborough divided his time between acting (in 19 feature films) and directing (12 features). Young Winston was his second directorial outing, and significantly different film from his debut picture, the very 1960s anti-war musical Oh! What a Lovely War (1969). Perhaps aware that "intimate epic" was more difficult than he'd imagined, he concentrated on epic in his third time as director (A Bridge Too Far; 1977), then on intimacy (Magic; 1978). It would finally come together in what would be his most honoured film, Gandhi (1982), for which he received Best Picture and Best Director Oscars. He followed that with another musical (A Chorus Line; 1985), then settled into a series of historical biographies. They included pictures about South African journalist Donald Woods (Cry Freedom; 1987), actor Charlie Chaplin (1992) and three writers, C.S. Lewis (Shadowlands; 1993), Ernest Hemingway (In Love and War; 1996) and Grey Owl (1999), a tale familiar to Canadians, that he filmed in Quebec. His last film, Closing the Ring (2007), also filmed in Canada, returned to the themes of love and war to tell an entirely fictional tale of a decades-long romance.