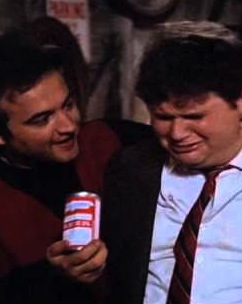 
It's the first day (May 30) of Vancouver Craft Beer Week 2014, and the right moment to quote Frank Kelly Rich's piquant essay The Subtle Art of Beer Snobbery. "While wine snobs have blighted the earth for thousands of years (you can bet there was at least one guy curling his lip at the vintage of Jesus’ first and best miracle), beer snobbery is a relatively young art," Rich writes on his website Modern Drunkard Magazine ("Standing Up for Your Right to Get Falling Down Drunk Since 1996"). He goes on to tell us that beer snobbery became possible only after "the microbrewery revolution swept the country, and soon every abandoned firehouse, bank and shoe factory was outfitted with a vat and turning out every possible form and flavour of beer you could imagine, and some you would rather not." Although I like to claim that I have been a beer snob since the mid-1960s, the truth is that I was just a young contrarian reacting to the wine snobs of the day. Today, though, true beer appreciation is possible, and Vancouver's Lower Mainland has more than 30 craft breweries to prove it. To honour the moment with the irreverence it deserves, Reeling Back recalls that classic look at kegger culture, the subtly Canadian comedy Animal House.

Wednesday, September 13, 1978.
ANIMAL HOUSE (a.k.a National Lampoon's Animal House). Written by Harold Ramis, Douglas Kenney and Chris Miller. Music by Elmer Bernstein. Directed by John Landis. Running time: 109 minutes. Mature entertainment with the B.C. Classifier's warning: occasional nudity; coarse language throughout. IT'S THE DEAD OF night. Three furtive figures lead a skittish stallion up the steps of the Faber College administrative building.
Earlier in the day, the horse's owner, a martinet cadet officer named Neidermeyer (Mark Metcalf) humiliated chubby Kent "Flounder" Dorfman (Stephen Furst), a freshman pledge to the Delta Tau Chi fraternity. Now, two of his new "brothers" are introducing Flounder to the fine art of "getting even." John "Bluto" Blutarsky (John Belushi) leads the horse into the office of the dean. Daniel Simpson "D-Day" Day (Bruce McGill) hands Flounder a gun.
The beast must die!
With a lump in his throat, Flounder confronts the steed. Tears welling up in his eyes, he raises the gun. A shot rings out. The animal rears up . . .
National Lampoon's Animal House is a horse of different colour. A fine, funny film, it offers audiences humour of a different hue. Thomas Carney, writing in the August 21 [1978] issue of New Times magazine, put it well.
"The National Lampoon was the first full-blown appearance of non-Jewish humour in years — not anti-Semitic, just non-Jewish. Its roots were WASP and Irish Catholic, with a weird strain of Canadian detachment, English eccentricity, a sort of soft looniness, a mild shriek, backed and braced by the wilder, blacker Irish  strain of savagery, the whacking at totems, satire as a magical weapon, the ceaseless overturning of an established order.
"This was not Jewish street-smart humour as defence mechanism; this was slash-and-burn stuff that alternated in pitch, but moved very much on the offensive. It was always disrespect everything, mostly yourself, a sort of reverse deism. And there was something else: over education.
" 'We were probably the only people who took our college educations and really used them,' (Lampoon co-founder) Henry Beard says. 'All that junk they crammed into our heads, the last reference before you dozed off in history class. We had everything up there from bubblegum cards to the Edict of Nantes.' "
Faber College is not Harvard. More Little League than Ivy League, it exists in a kind of middle-American Never-Never-Land, a world that can exist only in the movies. The year is 1963.
Under its tyrannical dean of students Vernon Wormer (John Vernon), Faber is home to two rival fraternities. One, Omega Theta Pi, is a well-scrubbed incubator for future White House aides and Vietnam Warriors.
The other, Delta Tau Chi, is, in Dean Wormer's words, "an animal house." It is full of rambunctious rejects. Unlike the dedicated, ambitious, utterly intolerant Omegas, Deltas live life to the full.
Unlike the Omegas, the Deltas have kegs of fun. Their attitude to discipline, decorum and the Great Issues of the Day is summed up nicely by brother Bluto: BawRRURP!
Of course the Omegas hate the Deltas.
Filmgoers, on the other hand, will love them. Co-written by Lampoon co-founder and first editor Doug Kenney (who appears in the film as a Delta brother called Stork), and directed by John (The Kentucky Fried Movie) Landis, Animal House brings to the movies what the parent magazine brought to the newsstand: a new kind of laughter.

Afterword: Made for an estimated $3 million, Animal House has to date grossed $141 million, which counts as a significant success. The film was shepherded to the screen by Canadian Ivan Reitman, who'd produced 1975's off-Broadway cabaret comedy The National Lampoon Show. (Among the Animal House writers was Harold Ramis, whose best-known collaborations with Reitman are the two Ghostbusters pictures, 1984 and 1989.) Adding to the Canadian content on screen are Donald Sutherland, as Dave Jennings, a professor who has casual sex with his student Katy (Karen Allen); and John Vernon, cast as Faber College's Dean Vernon Wormer.