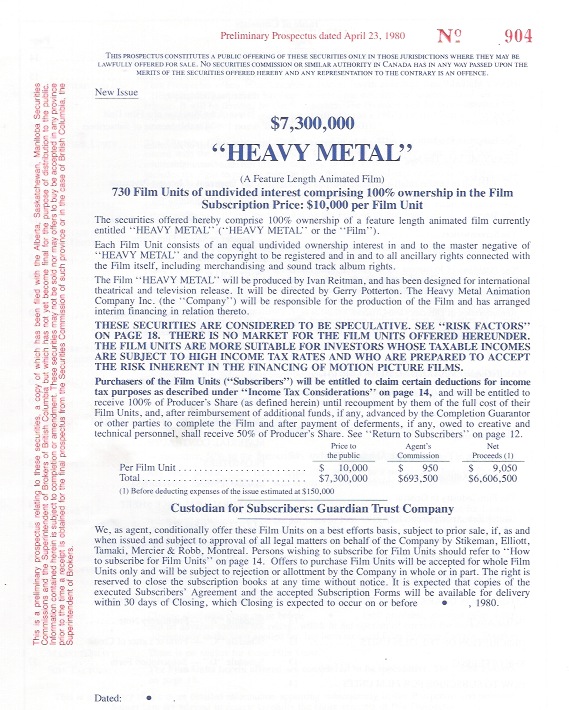 Issued on April 23, 1980, The Preliminary Prospectus for "Heavy Metal (A Feature Length Animated Film)" was a 37-page legal document.


It's about time that some Hollywood biographer examined the life of Ivan Reitman. Born on this day in 1946 (Oct. 27), the Canadian producer/director has made enough significant contributions to the pop culture to merit serious attention. He may be best known for directing the Ghostbusters films — though discovering Arnold Schwarzenegger's inner comedian (seen in Twins, 1988; Kindergarten Cop, 1990; and Junior, 1994) certainly ranks a close second. Such accomplishments overshadow Reitman's influence across a wide range of media, including publishing, television and the Broadway stage. Not only can he take credit for launching the career of director David Cronenberg (by producing the horror auteur's first two theatrical features), but he also produced Animal House (1978), the breakthrough moment for director John Landis and the National Lampoon generation of comic talent. To celebrate Reitman's 67th birthday, Reeling Back offers a four-part look at the making and marketing of his animated feature, 1981's Heavy Metal. Today, we look at its financial promise and review its artistic shortcomings. The story continues Monday, with a feature on a book about the movie and, on Tuesday, with a look at the soundtrack album.

Thurs. July 10, 1980
IN SOME PEOPLE, success breeds caution.  Others ride it for all it’s worth, throwing the dice for ever greater winnings.
Ivan Reitman is a gambler. Canada’s most successful commercial film-maker, he’s now planning to spend $7.3 million to make a cartoon feature based on material from the magazine Heavy Metal.
Reitman’s gambled before. In 1969, while still a student at Hamilton’s McMaster University, he gambled that Ontario was ready for a domestically-produced sex film.
He lost. Police seized the picture, called The Columbus of Sex, at its premiere screening. Found guilty of “making and showing an obscene film,” Reitman was put on probation and ordered to pay a fine.
In 1973, he gambled that he had the hustle to sell a low-budget horror-comedy in the Cannes marketplace. This time, Reitman won. Sam Arkoff of American-International Pictures liked what he saw and peeled off $50,000 for the U.S. distribution rights to  Cannibal Girls.
AIP proved to be a ready market for the next three Reitman-produced features, Shivers [aka They Came from Within], Death Weekend and Rabid.
In 1977, because of a previous association with the National Lampoon group, Reitman agreed to co-produce an American film, the off-the-wall comedy Animal House. Made for $34 million, the picture has already earned more than $63 million in domestic (U.S. and Canada) rentals and currently holds 12th place on Variety’s All-Time Film Rental Champs chart.
In 1978, Reitman gambled that he could do it again within a year, and do it from Canada. He raised $1.7 milliion through the sale of share units and made a summer-camp comedy called Meatballs.
To date, Meatballs has rental earnings of $19, 674,000 domestically and is the Canadian film industry’s No. 1 best-seller. This year, Reitman went back to his brokers, Calgary’s Newhouse Securities Ltd. (represented in Vancouver by Rademaker,  MacDougall and Company’s Shelter Group), and asked them to scare up another $7.3 million for him to make an animated feature.
What Reitman seems to have in mind this time is a rock-oriented anthology film, a sort of Fantasia for the 1980s. Six separate animation firms have been commissioned to produce the film’s various segments, all based on material from the magazine Heavy Metal.
On the newsstands since April, 1977, Heavy Metal is the self-described “adult illustrated fantasy magazine.” Designed as a comic book for grown-ups, it is published by the National Lampoon organization and is read by about a million people a month.
In their film script, Meatballs writers Len Blum and Dan Goldberg have linked together at least six stories from the magazine, a package that will include Richard Corben’s “Den,” Angus McKie’s “So Beautiful and So Dangerous” and Bernie Wrightson’s “Captain Sternn: Featuring Hanover Fiste.”
The attractions of the project are readily apparent.
The director on the picture is Gerald Potterton, a film-maker with both live-action and animated features to his credit. Among the animation houses involved is Britain’s Halas and Batchelor, makers of 1951’s Animal Farm, the U.K.’s first cartoon feature.
The tie-in with the National Lampoon-Heavy Metal marketing network guarantees that the word will get out to the film’s intended audience. Animation, of course, tends to go on forever, a fact borne out by the regular reissue of the Disney cartoon features.
Finally, there is Reitman himself. He’s on a winning streak and plugged into the U.S. distribution web. The American majors take him seriously.
The risks are equally impressive because, when all is said and done, Reitman is talking about adult animation. Those Disney features live forever because Disney can rely on a new subteen audience coming along every seven or so years.
If Heavy Metal, the movie, is faithful to its published inspiration, it will contain scenes of sex and violence, a lot of nudity and some drug use. Such elements attract the American R
(for Restricted) rating to live-action films. Given the experience of Ralph Bakshi’s 1972 feature, Fritz the Cat, Reitman will be lucky not to get an X.
If, on the other hand, he tones down the material in pursuit of the U.S. PG rating, he risks turning off the magazine’s readers without necessarily gaining any kid audience.
Then there is the matter of the numbers.
Disney points with pride to the success of 1937’s Snow White (made for $1,750,000; rentals to date of $26,750,000) and 1941’s Fantasia (costing $2,125,000, with rentals of $16.9 million). Just don’t mention 1959's $6-million Sleeping Beauty (rentals to date: $8.3 million)
Enter the realm of “adult” animation and market risk is even more dramatically apparent. Recorded domestic rentals for Bakshi’s $950,000 Heavy Traffic (1973) are $1.5 million; his 1977 “success” Wizards made only $9 million, and his $8-million Lord of the Rings has only $13,437,243 in rentals to date.
(Making sense of all those figures requires a little mathematics. Conventionally, the cost of a picture is multiplied two-and-a-half times to reach a break-even figure. Domestic rentals are doubled to show world-wide performance.)
Reitman plans to spend $7.3 million making Heavy Metal. He’s gambling that, by bringing together some of the finest talent in the animation business, Canadians can make the biggest breakthrough in the history of the genre. So far, he’s been right more often than he’s been wrong.

The above is a restored version of a Province feature by Michael Walsh originally published in 1980. For additional information on this archived material, please visit my FAQ.

AFTERWORD: Not quite what newspaper readers expected to see on the entertainment pages in 1980, the above story was prompted by a visit to my dentist. During Canada's era of tax-shelter production (1975-1982), dentists were a class of investors targeted by brokers with share units to sell. Because he knew what I did for a living, my own dental care-giver asked my opinion of the Heavy Metal "opportunity" that he'd been offered. I couldn't resist turning his question into a show-business finance feature examing the pros and cons of Reitman's gamble. On a subsequent visit, the good doctor told me he had, in fact, invested in the picture. Heavy Metal went on to produce domestic rentals of $20,117,636, enough to create happy smiles in dental offices across the land.