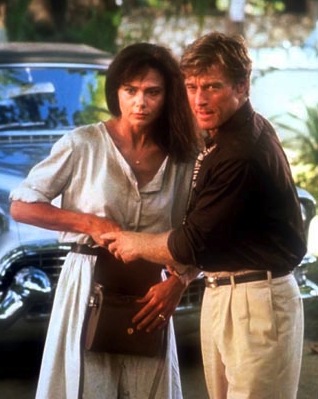 Roberta "Bobby" Duran (Lena Olin) has it in her power to change the world for emotionally torn Jack Weil (Robert Redford) in Sidney Pollack's Havana.


Among the late breaking news stories of 2014 was U.S. President Obama's mid-December move to "normalize" relations with Cuba. With encouragement from Pope Francis, talks held in Canada resulted in a diplomatic breakthrough that could end an economic embargo that began in 1960. A surprise to the career bloviators at Fox News and Canada's Fox-like Sun News networks, it suggests the question "why now?" In the long run, the answer that makes the most sense is "global warming." The oceans are rising, putting Miami, and the state of Florida, past their best-before dates. In June, 2013, Rolling Stone noted that "with just three feet of sea-level rise, more than a third of southern Florida will vanish." This July, the Guardian quoted Miami University geology professor Harold Wanless, saying that "by the end of this century, we could easily have a rise of six feet, possibly 10 feet. Nothing much will survive that." So, what happens to the nearly 20 million people — 22 per cent of them Hispanic — currently resident in the state? By making nice with Cuba now, Obama creates the possibility of relocating a substantial number of displaced Floridians when the tides rise and don't recede. The result could be a substantial real-estate boom on the mountainous island, and big changes to the quaint city at the heart of director Sidney Pollack's 1990 revolutionary drama, Havana

Friday, December 14, 1990.
HAVANA. Written by Judith Rasoe and David Rayfiel. Music by Dave Grusin. Co-produced and directed by Sidney Pollack. Running time: 144 minutes. Mature entertainment with the B.C. Classifier's warning: occasional violence, nudity, suggestive scenes and very coarse language. JACK WEIL (ROBERT REDFORD) is no Kid.
The Sundance Kid remains forever young, by virtue of having died young. One of the last of the frontier badmen, he was Butch Cassidy's best buddy and actor Redford's defining role.
Jack Weil is the maturing performer's attempt at redefinition. "A funny thing happened to me last week," Weil confides to a friend during a stroll through downtown Havana.
"I realized that I wasn't going to die young."
A professional gambler, Weil admits to having "been a lot of places since Pearl Harbor." Until now, life has been a search for "the best fuck and the biggest game."
"Now" is December, 1958. In pursuit of his twin goals, Weil has come to Cuba, the island paradise romanticized by Hemingway, controlled by Mafioso Meyer Lansky (Mark Rydell), and administered for the mob by the dictator Fulgencio Batista.
An apolitical urban frontiersman, Weil is only dimly aware of the revolutionary storm sweeping down from the Sierra Madre Mountains. On the ferry from Key West, he meets a Swedish-born beauty named Roberta (Lena Olin), the wife of aristocratic Cuban underground leader Arturo Duran (Raul Julia).
It's still the same old story . . .
As played by Redford, Weil is the personification of the American self-image. In some scenes, when the dawn's early light reflects orange off his swept-up hair and his face is in three-quarter profile, the resemblance to Ronald Reagan is sudden and striking.
In others, more formally lit with the full-cheeked actor facing the camera directly, we see Jack Kennedy, the icon of an entirely different America.
Havana, the story of a man learning to grow old purposefully, reunites Redford with his most frequent directorial collaborator, Sydney Pollack. Its screenplay originated with Judith Rascoe, who wedded nostalgia and left-of-centre politics in Pollack's The Way We Were, a 1973 romance that starred Redford and Barbra Streisand.
A tale of love and commitment in a corrupt city full of conflicting loyalties, Havana's storyline bears more than a passing resemblance to Casablanca. Indeed, Weil finds an almost-kindred spirit in Colonel Menocal (Tomas Milan), head of Cuban military intelligence, and the film's Louis Renault-like character.
While Weil's personal problems are almost a dead ringer for those of Bogie's Rick Blaine, the geopolitical backdrop is anything but. In place of the clear-cut villainy of the Nazis, Pollack offers us the ambiguities of a conflict among "official" American interests, the mob, a repressive dictatorship and communist revolutionaries.
To provide drama, the director zeroes in on Weil's own dilemma. "You want to change the world, Bobby?" the confused, emotionally torn American asks his equally torn married lover.
"Change mine!"
With the current U.S. president [George H.W. Bush] hellbent on providing us with another war real soon now, Havana is an attempt to return to the liberal idealism of wartime Hollywood.
* * *
BUFF STUFF — The Robert Redford/Sidney Pollack connection goes all the way back to 1966, the year the director cast the young stage actor opposite Natalie Wood in This Property Is Condemed.
Their subsequent features together include 1972's Jeremiah Johnson, The Way We Were (1972), Three Days of the Condor (1975), The Electric Horseman (1979) and Out of Africa (1985). Havana (filmed in the Dominican Republic) is their seventh film together.

Afterword: Judging by  its movies, the U.S. was all in favour of revolution in Cuba until it actually happened. In 1898, it was a president named McKinley reaching out to Cuba's revolutionary leader. In the 1936 feature A Messsge to Garcia, Wallace Beery plays the sergeant who ensures that McKinley's message is received. Santiago, made in 1956, starred Alan Ladd as an American gunrunner selling arms to Garcia's freedom fighters in 1895. John Huston directed John Garfield in We Were Strangers (1949), a forgotten adventure film about the revolution that toppled Cuban dictator Gerardo Machada y Morales in 1933. Having the distinction of being pro-Castro is the 1959 independent feature Pier 5, Havana, an action film that starred Cameron Mitchell as a American who fights counterrevolutionary forces in the immediate aftermath of the December, 1958, regime change. They all laughed when director Richard Fleischer cast Jack Palance as Castro and Omar Sharif to play the title role in the 1969 biographical feature Che. Five years later, the collapse of the Batista regime was seen through the eyes of Al Pacino's mafia don Michael Corleone in The Godfather, Part II (1974). Ten years on, the eyes are those of Sean Connery's English mercenary Robert Dapes in Cuba, director Richard Lester's 1979 thriller. More recently, Havana-born actor-director Andy Garcia's 2005 feature Lost City deals with the problems Castro's popular revolution caused for Cuba's wealthy few. Goodness knows what new films are in the works now that "normalization" is on the way.