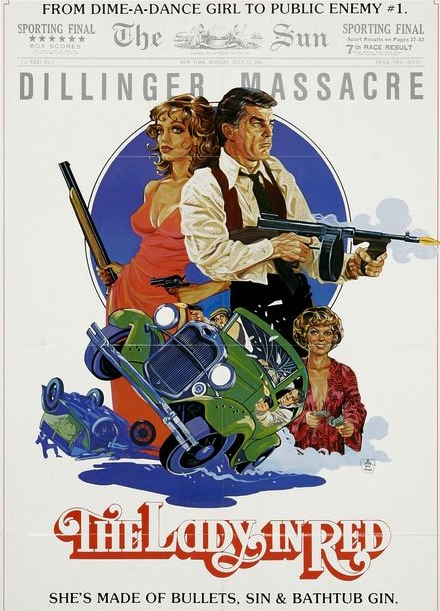 Changing with the times


A minor movie, The Lady in Red had a major impact on the career of actress Pamela Sue Martin and a special place in the history of Vancouver's Hollywood Theatre (read all about that in our Local News story headlined Hollywood's Red Risk). Today (Jan. 17), the final fate of the 79-year-old movie house is uncertain. Opened in 1935, the neighbourhood cinema celebrated its 75th anniversary in 2010. Owned and operated by four generations of the Fairleigh family, its closure and sale to a property developer in 2011 came as shock to the community. Unable to proceed immediately with his plan to gut the interior and repurpose the building as a fitness centre, the new owner found a tenant in a local Christian congregation that reopened it as The Church of the Hollywood in September, 2012. The church group's lease expired at the end of November 2013, but its action in preserving the theatre space (and screening films) bought time for a community group, the Save the Hollywood Theatre Coalition, to form. Following a mid-November meeting that attracted cultural celebrities as well as provincial and municipal politicians, the city put a ban on further development until Jan. 20, 2014. Earlier this week, the city extended its ban for a further 45 days in the hope that a deal could be struck between the owner and the community.

ACCORDING TO THE LEGEND, John Dillinger was a movie fan. On the evening of July 22, 1934, he took his girlfriend to the Biograph Theatre in Chicago where Clark Gable was starring in Manhattan Melodrama, the story of a slum kid who grows up to be a gangster.
Two hours later, he was dead, gunned down in the street by a posse led by FBI special agent Melvin Purvis. Dillinger, brayed the headlines, had been betrayed by a mysterious "lady in red."
Forget for a moment what they did to Chicago. Gangsters have been good to Hollywood. The American movie industry has prospered through various gangster film cycles.
The genre was born in the 1930s with pictures such as Little Caesar (1930), Public Enemy (1931) and Scarface (1932). It returned after the war (White Heat, 1949) and has been in and out of vogue ever since (Al Capone, 1959; Bonnie and Clyde, 1967; The Godfather, 1972).
Produced in 1979, Lewis Teague's The Lady in Red has pretty well been lost in the shuffle. It's a shame, because Teague, a former second-unit director, carries off the assignment for producer Roger Corman's New World Pictures with energy and confidence.
Like the recent Death Hunt, The Lady in Red is something less than historical. Designed for the action-exploitation market, it gave screenwriter John (Piranha, The Return of the Secaucus Seven) Sayles the opportunity to create a fictional study of the little-known lady.
She, not Dillinger, is the central character. She is Polly Franklin (Pamela Sue Martin), an Illinois farm girl who is caught up in a story that includes such real life figures as Chicago Tribune crime reporter Jake Lingle (Robert Hogan), G-man Elliot Ness (Phillip Allen), Anna Sages (Louise Fletcher), Purvis (Alan Vint) and, of course, Dillinger (Robert Conrad).
Martin was obviously looking for a "meaty" adult role to shed her TV Nancy Drew image. The Lady in Red gives it to her in spades.
Before Dillinger makes his appearance, she is used as a shield by bank robbers, seduced, beaten, involved in a sweatshop garment factory workers revolt, arrested, imprisoned, stripped and sent to work in a mob-protected brothel. And the picture is not even half over.
Exploitation material? Of course. But, just as Francis Coppola was able to undertake "another cheap gangster movie" and produce the Oscar-winning Godfather, Sayles and Teague are able to turn their "cheap exploitation movie" into a film full of cheeky wit and clever touches.
Breathlessly paced and competently acted, the picture is slick, professionally mounted action entertainment.

Afterword: When it was published in 1984, this review of The Lady in Red led directly into a feature story about programming changes at Vancouver's independently-owned Hollywood Theatre, a story that you can read in Reeling Back's Vancouver Memories section. Although my decision to revisit The Lady in Red at this time was prompted by the current Save the Hollywood campaign, it should be noted that actress Pamela Sue Martin's attempt to take charge of her career and change her image was a qualified success. Her personal declaration of independence included an appearance on the cover of the July 1978 issue of Playboy Magazine ("TV's Nancy Drew Undraped"). Her Wikipedia biography tells us that the Playboy feature "caused her to be axed from the series." She would thereafter be treated as an adult — including a four-season run as self-centred heiress Fallon Carrington Colby on ABC-TV's Dynasty (1981-84) — but her subsequent career did not include any major motion pictures roles. Currently she lives in Idaho, where she is involved in environmental activism and regional theatre stage directing.